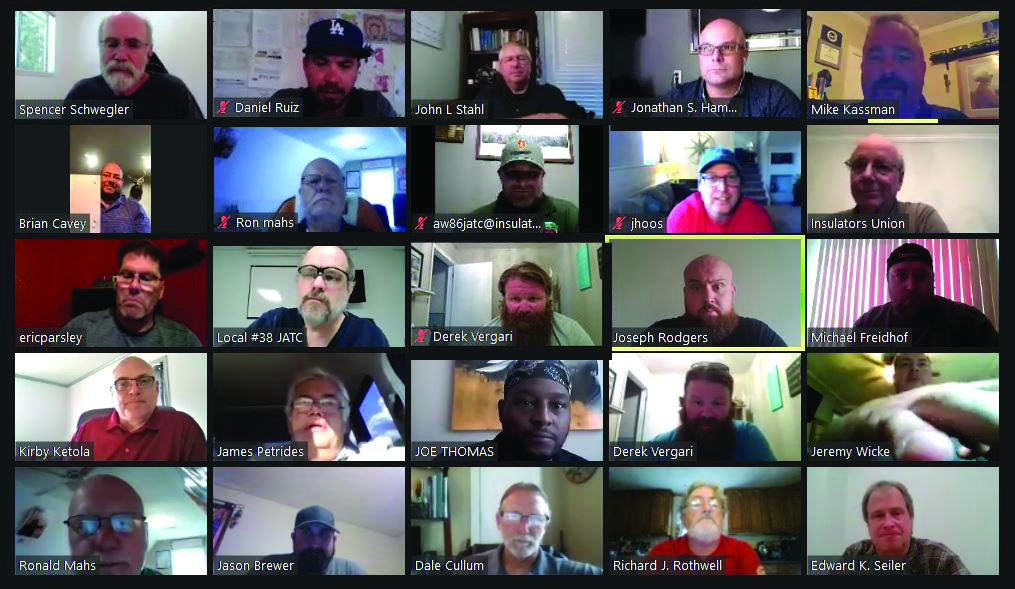 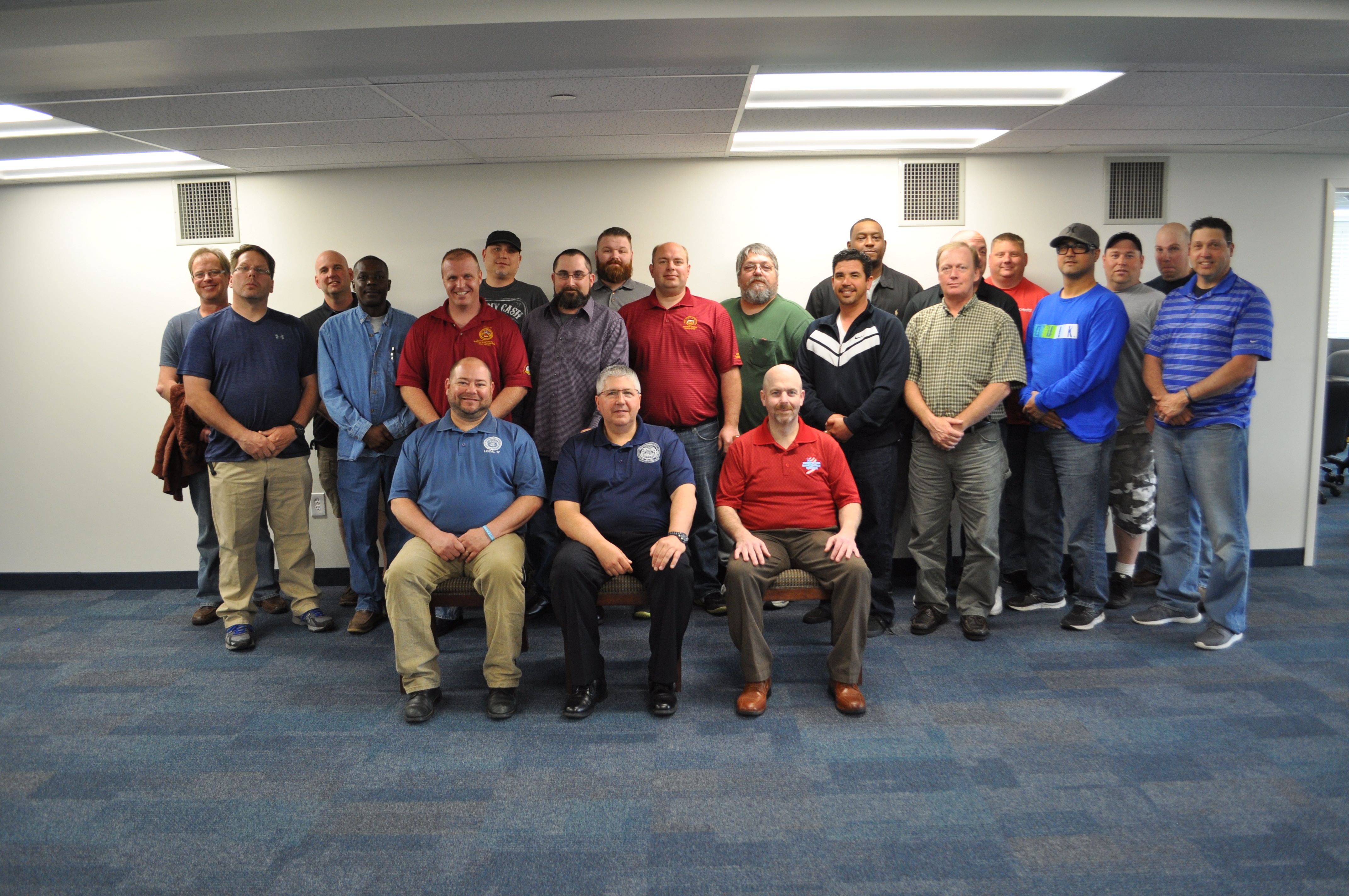 In late March, the Insulation Industry International Apprentice and Training Fund (IIIATF) sponsored an OSHA 510 course, a prerequisite class to both the OSHA 500 32-hour class and the OSHA 500 40-hour class. It was held at the Maritime Institute in Maryland and 20 instructors attended.

This course certifies that all of the trainers that completed the course are now eligible to teach the OSHA 10- and OSHA 30-hour classes for the next 4 years.

The instructors for the course were Training Directors John Stahl from Local 14 in Philadelphia, PA, Bob McGuckin from Local 17 in Chicago, IL and Brian Cavey from Local 24 in Washington, DC.

“This poster emphasizes a very important principle when it comes to prevention – that every worker has a voice,” said Assistant Secretary of Labor for Occupational Safety and Health Dr. David Michaels. “Workers need to know their rights and be able to use their rights, without fear of retaliation, when they believe that their safety or health is at risk.”

The newly designed poster informs workers of their right to request an OSHA inspection of their workplaces, receive information and training on job hazards, report a work-related injury or illness, and raise safety and health concerns with their employer or OSHA without being retaliated against.

The poster informs employers of their legal obligation to provide a safe workplace. In addition, it has been updated to include the new reporting obligations for employers, who must now report every fatality and every hospitalization, amputation and loss of an eye. It also informs employers of their responsibilities to train all workers in a language and vocabulary they can understand, comply with OSHA standards, and post citations at or near the place of an alleged violation.

Over the agency’s 44-year history, there have been several versions of the official OSHA poster, with the last update published in 2007.

OSHA’s “It’s the Law” poster is free and can be downloaded. Employers must display the poster in a conspicuous place where workers can see it. Previous versions of the poster do not need to be replaced.

Under the Occupational Safety and Health Act of 1970, employers are responsible for providing safe and healthful workplaces for their employees. OSHA’s role is to ensure these conditions for America’s working men and women by setting and enforcing standards, and providing training, education and assistance. For more information, visit www.osha.gov.

Ingersoll and his wife (via MLive)

A fire in what was once the world’s tallest residential skyscraper in Dubaihas brought the safety measures of these soaring buildings back into the spotlight.

The fire, which is believed to have broken out on the 52 floor before spreading, was quickly brought under control by local fire-fighters. Despite terrifying images of falling debris, whipped by winds, there have been no reported deaths – or even injuries.

It is a testament to the evolution of skyscraper construction, often cited as the forefront of architectural design.

Since 9/11 architects have sought – more than ever – to improve safety and evacuation possibilities in these tall builders.

The dangers of skyscraper fires

Fires in high-rise buildings present a number of significant challenges to fire crews. Firstly, and most obviously, the sheer height of these buildings means that crews’ water hoses are often unable to reach the flames.

The average fire hose can spray up to 50ft, but a high-rise building is defined as anything from 75ft upwards – and in the case of the Dubai tower over 1,000ft.

Fire-fighters therefore have to enter the building, locating the entrances, exits, stairwells, before they can even begin fighting the outbreak. These minutes could allow the fire to spread further and prevent fire crews from knowing the severity or location of the outbreak.

A general view of the skyscrapers in Canary Wharf

Ok, so how are fires fought at such heights?

To combat this, engineers and architects design the buildings so that fires are contained, limiting the spread of flames, gas or smoke in a process known as “fire compartmentation”.

The rough rule of thumb is that any outbreak should be able to burn itself out without external intervention, and without the building collapsing, allowing for the evacuation of occupants above and below the fire.

This strategy means that (for example) elderly or disabled residents can be “defended in place” when they are 200 stories up. It also leads to the counter-intuitive notion that were you to be in a supertall building during a fire, your best course of action may be to stay put.

Skyscrapers could double in size

Building are constructed with fire-resistant features, such as automated doors – which close when a fire is detected – or barriers throughout floors that are designed to slow fires.

Among the most dangerous high-rise fire outbreak occur in office blocks, where large open-plan floors allow flames to spread easily and terrifyingly quickly.

Many skyscrapers are constructed like metal boxes within metal boxes (although this is changing as more innovative design becomes widespread) in buildings such as these however, each ‘box’ is protected by fire-proofed material that helps contain the outbreak.

Skyscraper construction in the wake of 9/11

Freedom Tower, the building that now occupies a site just north of the Twin Towers, contains a number of specific features as a direct result of the previous buildings collapse. These features indicate the changing attitude to design.

A dedicated staircase for the emergency crew runs up the core of the building. This core, pressurised and protected by 3ft extra-strong concrete walls, combats fire-fighters being unable to access the flames.

The design of the Burji Kalifa, a 168-floor tower also in Dubai, was affected by 9/11. In the case of a fire occupants travel to designated ‘refuge areas’ on each floor before taking lifts (named ‘lifeboats’) down to exits on the ground floor.

This innovation directly contravenes traditional wisdom that you should never take a lift during a fire as the electronics will be affected by the water needed to fight the flames.

One of the key lessons learnt from the collapse of the Twin Towers in 2001 was the scarcity of information that the emergency crews had access to. Despite the building being full-fitted with smoke alarms, security cameras and air condition systems none of these were set up to deliver information to the fire-fighters.

Now technology has been developed to allow crews to access this information. 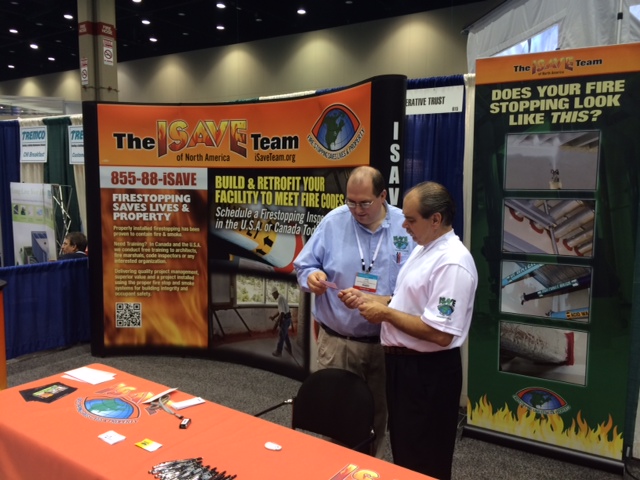 Firestop promotion and education at the 51st ASHE Convention

The following comes directly from a recent U.S. Department of Labor press release: 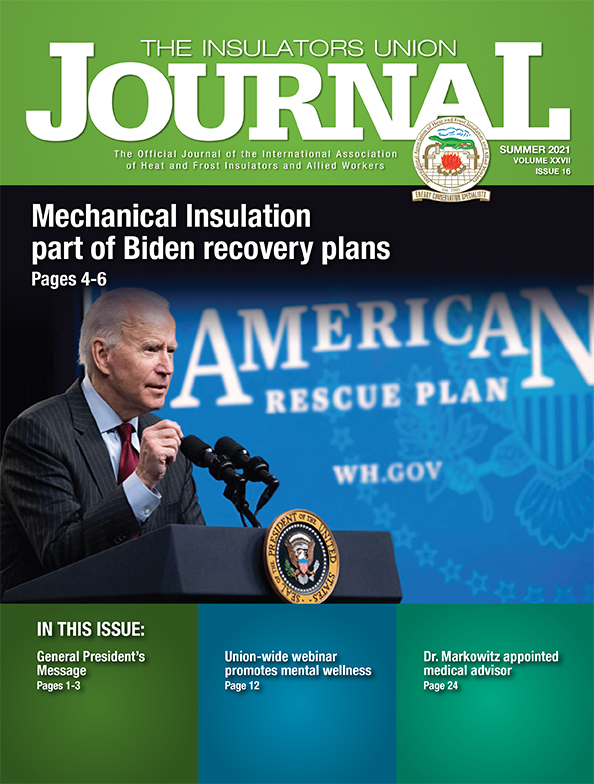