In late March, the Insulation Industry International Apprentice and Training Fund (IIIATF) sponsored an OSHA 510 course, a prerequisite class to both the OSHA 500 32-hour class and the OSHA 500 40-hour class. It was held at the Maritime Institute in Maryland and 20 instructors attended.

This course certifies that all of the trainers that completed the course are now eligible to teach the OSHA 10- and OSHA 30-hour classes for the next 4 years.

The instructors for the course were Training Directors John Stahl from Local 14 in Philadelphia, PA, Bob McGuckin from Local 17 in Chicago, IL and Brian Cavey from Local 24 in Washington, DC.

Training Director Stahl has been involved with Local 14’s Training Department since 2004, first as an Instructor and then as the Director in August 2006. Stahl has served on the IIIATF Steering Committee since 2006 and became an OSHA Master Trainer in 2014. Since then, he has been active in teaching OSHA 500, OSHA 502 and OSHA 510 courses, as well as presenting for numerous years at the JATC Apprenticeship Conferences.

McGuckin has been the Training Director in Chicago since 2009. His brought his penchant for teaching to the IIIATF in 2011, where he has since been approved as an International Master Trainer with OSHA. McGuckin currently teaches OSHA 500, OSHA 502 and OSHA 510 for the International Apprentice and Training Fund.

Since 2000, Cavey has been the Local 24 Training Director and on the Steering Committee for the IIIATF. He has spent 27 years in the trade as a third generation Insulator. Cavey started teaching OSHA training when he was approved as an Outreach Trainer in 2001. This was his third OSHA 500 and second OSHA 510 course he has taught since he became an International Master Trainer in 2012. His other training includes the local and JAC Conference experience where he traditionally teaches on several topics at every conference.

Congratulations to the HFIAW Brothers who passed the OSHA 500 training and are now able to train members at their Locals for the OSHA 10- and OSHA 30-hour classes. 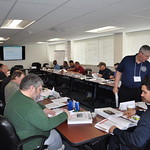