Local 24 and the International played a role in the creation and execution of the Raising the BAR program. The program includes 120 hours of training taught over three weeks and provides an investment in the next generation of union construction workers, while offering a ladder of opportunity into the middle class for local workers and their families through a pre-apprenticeship program.

“The building trades as a whole needed to align the individual trade pre-apprenticeship programs offered to streamline material for the entire union construction industry,” Haun said. “This would introduce the trades to younger people and offer apprenticeship readiness training materials to public school systems – this could be an alternative to the non-union materials and keep the union building trades competitive.”

When the NABTU MC3 training was launched, there were two pilot programs in the U.S., one in New Orleans and the other in Baltimore.

“From the beginning, we have supported the Raising the BAR program,” said Local 24 Business Manager Brian Cavey, who is the Local’s former Training Coordinator. Cavey was the chair for the Baltimore-D.C. Metro Building Trades Council Apprenticeship Coordinators when the program was developed.

“It is important to be part of giving minority and low-income students a chance,” Cavey said. “As a trade, as a union and as an industry, we have to be dedicated to growing.” 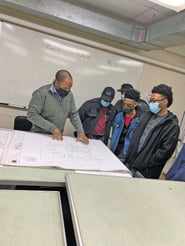 With the most recent graduating Raising the BAR program class, Local 24 Training Coordinator Jim Hoos taught 10 hours of OSHA, where they hosted the students at the new Local 24 training center.

The Raising the BAR program continues to find success by educating students and putting them to work with successful careers following the apprenticeship readiness training.

In conjunction with the United Way of Central Maryland and the Metro Baltimore AFL-CIO, Local 24 has been able to grow the ranks of its Apprenticeship Program with well-equipped students who have graduated from the program.

Kenyon “Jazz” Baxter is a recent graduate of the program. He completed his training during the pandemic and is now finding success with Local 24 as a first-year apprentice.

For the past 10 years, Brother Baxter was a UNITE HERE union banquet server and bartender in the hotel industry. When the pandemic hit, the hotel and banquet industry was devastated.

“I didn’t leave [the hotel industry] because I wanted to,” said Baxter, who lives in west Baltimore with his wife and 5-year-old son. “I left because I was forced to.”

Baxter knew he had to do something, so when he learned about the Raising the BAR program, he decided to apply. This opportunity was the break he needed to provide for his family and earn a living with a union career.

“Because of the Raising the BAR, I was more prepared to enter the Insulators apprenticeship program,” said Brother Baxter. “If any student has the chance to do a pre-apprenticeship class, I recommend doing it. You will get so much information and get the basics of all the trades to see what fits you best.”

Currently, there are hundreds of MC3 apprenticeship readiness programs being taught across the country, with thousands of students earning direct entry into successful careers with the building trades.