In Canada, we were in various forms of lockdown for the first half of 2021. While this impacted our advocacy efforts, Canada’s Heat and Frost Insulators are proud of the creative and collaborative approach taken to ensure we remain at the forefront of policy decision-makers and funding at the federal level, and in many regions of the country.

Leading up to the spring federal budget, the government was laser focused on managing COVID-19 infection rates, procuring and distributing vaccines and planning for the eventual recovery. Working with Canada’s Building Trades and Heat and Frost Training Centres across the country, we were able to advance our public policy files and achieve a few wins for the trade.

At the time of this writing, Canada seems destined to head to another federal election. All political parties are currently preparing for what is expected to be a late September trip to the ballot box. Rather than prognosticate about how that might go, we decided to highlight some of the lobbying activities over the past year, many of which are on-going.

Some of the biggest progress made in 2021 was focused on incentives for energy retrofit programs to help Canada meet its climate change targets, reduce energy consumption, improve business competitiveness through reduced costs and of course, to generate work for the trade.

In advance of the federal budget, the government previewed its pandemic recovery program, including $2 billion to the Canada Infrastructure Bank to invest in energy efficiency retrofits to help Canadian industry reduce emissions, energy costs and improve business competitiveness. Canada Building Trades have engaged with the Canada Infrastructure Bank and received briefings on their early plans to support this transition.

The 2021 federal budget included measures that expanded investments in programs designed to meet energy efficiency targets. Unsurprisingly, given the likelihood that 2021 was to be an election year, the budget focused
$4.4 billion on incentives for Canadians to improve the energy efficiency of their homes with up to $40,000 in
interest free loans.

Canada’s Mechanical Insulators have renewed the focus of our advocacy on lobbying the government to expand programming to include incentives for deep energy retrofits for industrial and commercial buildings, not just residential.

Thanks to some direct engagement from HFIAW Eastern Canada  International Vice President  and CBTU Board Member Paul Faulkner to key ministers, as well as their staffs, the government acknowledged more needs to be done to address Canada’s heavy industry and commercial sector. This has become the focus of the Insulators Budget 2022 advocacy. 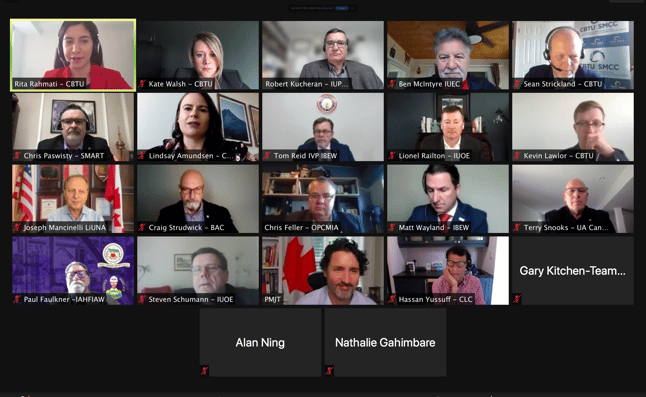 Focus on training and apprentices

Canada’s Insulators continue to advocate the federal government to invest in the skilled trades through its apprenticeship programs, and by providing additional funding to the Union Training and Innovation Program (UTIP) to better equip training centers to meet new challenges and demands in the labour market. The federal government has made $85 million available under the UTIP and the 2021 budget included new investment and programs to support apprenticeship.

A new Canadian Apprenticeship Service program has yet to be established, but the commitment from the government is an investment of $470 million over three years will help 55,000 first-year apprentices in construction and manufacturing Red Seal trades connect with opportunities at small and medium-sized employers. Eligible contractors can receive up to $5,000 for all first-year apprenticeship opportunities to assist with upfront costs like wages and training.

As part of the government’s and building trades’ effort to increase diversity in the construction and manufacturing Red Seal trades, this incentive will be doubled to $10,000 for contractors who hire people from underrepresented groups. This includes women, racialized Canadians and persons with disabilities.

As the Government of Canada moves into the COVID-19 pandemic recovery phase, Insulators have prioritized advocacy toward investments in retrofitting Canadian buildings, as well as industrial and commercial facilities. These investments will help this growing sector meet the demand of government programs and advance Canada’s emission reduction targets. Buildings are estimated to account for approximately 17 percent of Canada’s total greenhouse gas emissions (GHGs).

To enable the expansion of the energy efficiency workforce, Insulators also continue to advocate for training, equipment and apprenticeships for the skilled trades, particularly those that are working to innovate within the burgeoning green economy. By investing in specific building trades training, such as Mechanical Insulation, the federal government can improve the productivity and competitiveness of the Canadian economy and contribute to environmental objectives, including reducing GHGs.

Insulators make a compelling argument how sustained investments in training and apprenticeships, with a focus on energy efficiency trades, will help grow the middle class and train the future workforce while improving the productivity and competitiveness of Canadian industry.

As Canada pivots to the social and economic recovery from the COVID-19 pandemic, now is the time to maximize investments in energy efficiency, training and improved labour mobility to facilitate an effective and sustained recovery. This will improve the productivity, competitiveness and resilience of the Canadian economy and labour force.

Heat and Frost Insulators Training Centre in New Brunswick submitted a proposal to Member of Parliament
Wayne Long, who has committed to advocate for the proposal with the Minister of Natural Resources.

The first phase of this two-phase pilot project consists of mechanical insulation-focused energy audits on five to 10 federal government buildings in the Province of New Brunswick. This proposal stems from a partnership
between the Training Centre and local contractors that has successfully been rolled out on numerous schools in
New Brunswick.

The purpose of these audits would be to identify missing, damaged or improperly installed insulation.
Following the audit, the appraiser would analyze the findings to determine what mechanical insulation upgrades are required, how much this will cost and what the annualized energy and cost savings will be. This will enable a return on investment calculation – the number of months it will take for the building owner to recuperate the cost of the upgrades.

The successful delivery of the initial proposed phase of the pilot project would enable a secondary phase targeted at other federal buildings across the country and private sector, commercial or industrial facilities, with upfront financing incentives provided by the Government of Canada. This will help to improve the energy efficiency of industries, as well as reduce emissions and business costs, thereby improving industry competitiveness.

Heat and Frost Insulators in Canada’s largest province of Ontario have previously submitted a similar pilot
project proposal to that government. This concept was initially favourably received by key decision-makers in
Ontario, but stalled due to the province’s focus on pandemic response and recovery.

Based on the success of the mechanical insulation focused pilot project(s), Insulators are advocating the Government of Canada to replicate this program in other provincial jurisdictions. Heat and Frost Insulator Training Centres and contractors across the country are available to expand this program at the national level.

As both the Biden and Trudeau administrations roll out their respective plans to Build Back Better, Canada’s Heat and Frost Insulators will continue to play an important and constructive role supporting government investments in energy efficiency, training and apprenticeships in the skilled trades and advocating for a national Mesothelioma Patient Registry. The Canadian government’s agenda provides ample opportunity to align priorities and we look forward to reporting back on progress.