As leaders in the recognition of the dangers of asbestos, the HFIAW continues to research a cure for the insidious diseases it causes.

Asbestos insulation was used in homes, buildings, ships, cars, and manufacturing facilities for the better part of the last 200 years to conserve energy, reduce electrical conductivity, and retain hot and cold temperatures.

While asbestos was largely praised for being inexpensive and durable, many did not realize - or refused to admit - that this fire-resistant mineral was also harming the skilled workers trained to handle it.

After many years of industry and government denials, the research supported by the International Association of Heat and Frost Insulators and Allied Workers that showed workers exposed to asbestos died in hugely disproportionate numbers from cancer finally gained worldwide medical acceptance near the end of the 20th century. The medical community, industry and government now recognize the danger of asbestos and have adhered to union recommendations to establish, enact and enforce regulations to minimize such exposure to carcinogens in the future that are still used to this day.

While today's Insulators take every precaution to prevent themselves from the dangers of asbestos on the jobsite, the HFIAW remains committed to helping those who helped blaze the trail within our industry. As a Union, we take care of our own.

Nearly 20% of Insulator deaths are a result of lung cancer. One of the key initiatives the HFIAW has taken on to combat asbestos-related disease is saving our members' lives through the early and regular detection and cure of lung cancer.

The low dose CT scan of the chest is a non-invasive test that allows doctors to identify lung cancer when it is still limited in size and can be removed. The test was approved in December 2013 by the U.S. Preventive Services Task Force, a panel supported by the federal government.

The low dose CT scan takes just a few minutes, is non-invasive, and involves no injection. Most people whose lung cancer has been detected through this method in medical studies have been treated and have survived the lung cancer to lead normal lives.

The HFIAW urges our members aged 50 and over to have this test yearly if they have been exposed to asbestos at work or at home and/or have smoked cigarettes on a regular basis either currently or in the past.

Learn more about how the HFIAW is working to combat asbestos-related disease with our Early Detection Booklet. 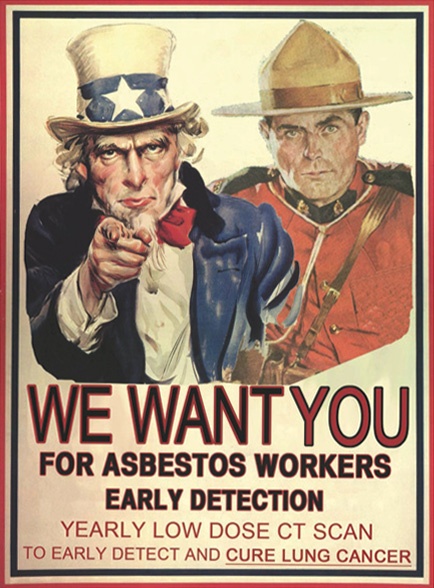 You should consider having this test yearly if you: