For the first time in competition history, an apprentice from HFIAW Local 119 earned the Master Apprentice Competition (MAC) title.

Held in Phoenix from May 18 to 23, fourth-year apprentice Aziz Kerimov from Local 119 Regina, Saskatchewan prevailed in the friendly competition, which pits the top 10 apprentices, who represent each Conference from the U.S. and Canada, against each other.

“I have won!” Kerimov exclaimed, as he clutched the coveted trophy and posed for pictures with family, friends, his training instructor and members of his Local in front of his winning mock up. With the victory, Kerimov became the second Canadian to win the Master Apprentice Competition. 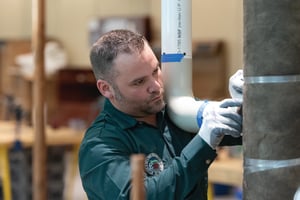 This year, the MAC was held in conjunction with the Joint Apprenticeship Committee (JAC) Conference and the Local Union Officers Meeting.

Unlike years past where only members involved with the training side of the union were on hand to see the work of the union’s top apprentices, the combined conferences allowed MAC competitors to showcase their professional skills, education and quality craftsmanship to multiple levels of union leadership.

The five-day competition began on Saturday with a 200-question written, industry-focused test. Once the test was over, International Insulation Industry Apprenticeship and Training Fund (IIIATF) Administrator Tom Haun welcomed the apprentices and gave them their first glimpse at the mockup, which has traditionally incorporated a regional landmark or symbol. 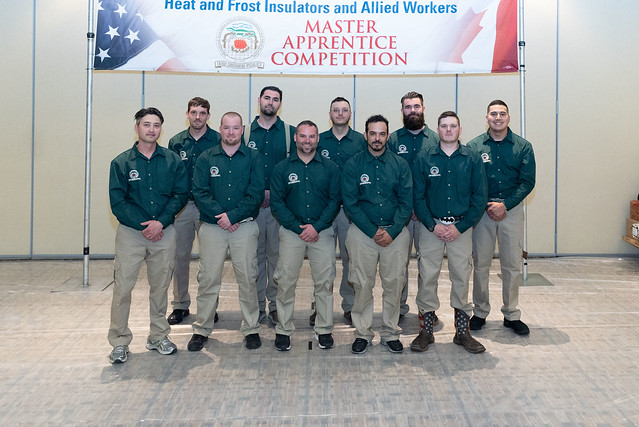 All MAC competitors received printed project specs that specified how the work must be completed. This year, competition proctors Dave Soika from Local 12, New York City and Lew Fitzgerald and John Sullivan from Local 14, Philadelphia created the mock-up and specifications.

The proctors designed the mock-up to include a 7-foot cactus to be finished in green PVC, a smaller cactus finished in rubber, a valve system jacketed in metal, and a teepee tent finished in PVC. The mock-up was designed to replicate the surrounding Arizona dessert. The competition room was then sealed off from union officers and training delegates, who were at the same resort for their respective conference meetings.

On Sunday, the apprentices were given eight hours to complete the rough-in work as outlined in the build specifications. They spent another two full days on finishing work, which provided a challenge as the specifications drew upon a variety of skills encountered on various jobsites.

As in the past, competitors were blindly judged after the rough-in and upon total completion by a panel consisting of volunteer judges from every conference. On Wednesday evening, HFIAW General President, General Secretary Treasurer and all International Vice Presidents, along with various training directors and union officers were invited to the competition room, where all 10 competitors proudly stood next to their work. They also were greeted and congratulated by friends and family.

During this time, General President James McCourt and General Secretary Greg Revard took the opportunity to briefly address the crowd and praise the work performed by the apprentices.

“The craftsmanship these apprentices have on display is incredible,” said General President McCourt.

“I am proud to call you my Brothers. It’s a great thing that we have combined these meetings so the work done here at the MAC can be seen by all of our Local leadership.”

General Secretary Treasurer Revard congratulated all of the Apprentices, as well as the instructors and Training Coordinators in the room.

“You are doing a great job of teaching these insulators how to be professional,” he said. “The future of our trade is in good hands.”

Overall, the competitors displayed a high-level of execution and professionalism, with slight variations each competitor used to put their own spin and details on the project. 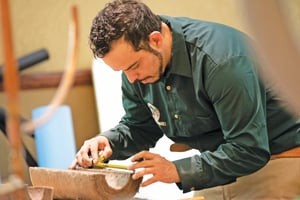 On Thursday night, the entire delegation along with all 10 competitors and their training coordinators, guests and families attended the Florence Bernard/Alta Miller Scholarship Dinner, where scholarships were to be awarded, and then the MAC winner announced. 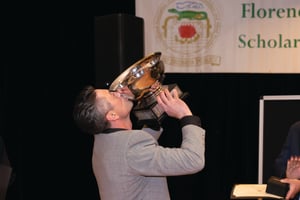 When it was time, IIIATF Administrator Tom Haun gathered the contestants to the stage to be recognized. Each MAC competitor was awarded a certificate, a watch, a bag and tool set provided by Milwaukee Tools and a four-year scholarship to attend Trainer Enhancement courses hosted by the IIIATF. With the apprentices’ eyes focused on the MAC trophy cup, Haun announced Kerimov had won the prestigious competition.

Kerimov was shocked, but proudly accepted the trophy and continued the MAC tradition of kissing the cup.

He then celebrated with the many Canadians who attended the conferences. Kerimov said he is glad the competition is over and that all his hard work paid off. “This whole experience has been rewarding and I am happy to represent Local 119,” he said.

The IIIATF congratulates all the apprentices and their coordinators for the hard work and dedication that made the 2019 Master Apprentice Competition a huge success.