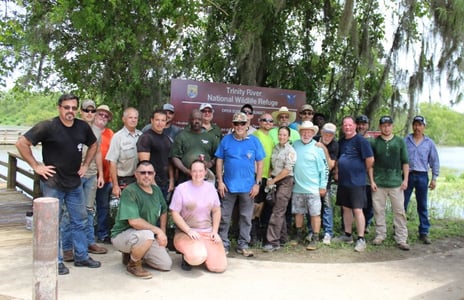 “We replaced pretty much everything above the waterline,” said project leader and retired Local 68 secretary/treasurer Mike Cramer, adding that the effort entailed roughly 240 hours of skilled labor and 80 hours of general labor—a donation of time and talent worth nearly $15,000.

Funds for lumber and other building supplies were also donated. “The project required nearly $10,000 worth of construction materials,” said Cramer, “which were purchased with proceeds from the annual conservation fundraising dinner organized by the Houston Gulf Coast Building and Construction Trades Council and the USA.”

The spacious T-shaped pier is a favorite destination for refuge visitors who want to view wildlife or fish for abundant bass, crappies and catfish on the 800-acre lake. 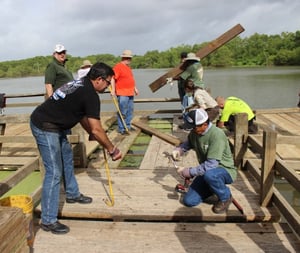 “The pier was built 15 years ago,” said refuge manager Stuart Marcus, “and was showing its age. Between the flooding we get from time to time, extreme seasonal temperature swings and normal wear and tear, it really did need to be repaired.

“We’ve enjoyed working with the unions over the years, and this was another fantastic job,” he added. “It would not have been possible without the USA, the volunteers who donated their time and the union-raised funds used to purchase the materials.”

Though the project took only two days to complete, getting started on it proved to be challenging, according to Cramer. “Our plan was to start work several weeks ago when air temperatures were in the 70s,” he explained, “but heavy rains upstream put the structure under water. When lake levels dropped and the volunteers could finally get to it, they were working in sweltering 90-plus degree weather. But they’re a dedicated bunch and got the job done.”

USA Director of Conservation and Community Outreach Forrest Parker explained that the Trinity River National Wildlife Refuge project, like similar efforts the USA has organized across the United States, was a labor of love.

“It’s an honor to support the national wildlife refuge system’s efforts to protect a network of lands and waters for conservation for the benefit of all Americans,” he said. “And we are extremely proud of the union volunteers who donate their time and trade skills to complete projects on refuges and elsewhere in their local communities to improve public access and impact the future of conservation and our shared outdoor heritage.”

Parker noted that projects resulting from the USA’s partnership with the Department of Interior (DOI) also include ongoing enhancement work at the John Heinz National Wildlife Refuge in Philadelphia, where union volunteers donated more than 800 hours of skilled labor to install a kayak launch dock, make improvements to an observation tower and repair roads and trails.