Spring Hill, Tenn. — The Union Sportsmen’s Alliance (USA) has honored International Association of Heat and Frost Insulators and Allied Workers (Insulators) Local 14 Member John Stahl with the 2019 Insulators Conservation Steward of the Year Award for his exemplary commitment to conservation and community service.

The award recognizes volunteers from each of the USA’s charter unions who have made exceptional contributions to the USA’s efforts to organize union volunteers to donate their time and unique trade skills to preserve North America’s outdoor heritage. 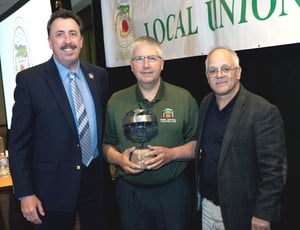 Stahl, of Williamstown, New Jersey, oversees the apprenticeship program of Insulators Local 14. He shepherded the USA’s John Heinz National Wildlife Refuge enhancement project, in which union volunteers with Insulators Local 14, IUPAT DC 21 and Operating Engineers Local 542 in 2018 donated 691 hours of skilled labor valued at more than $36,000 on a kayak launch dock, observation tower improvements and road repairs. Machinery usage valued at $20,000 pushed the total project value over $56,000. With work continuing in 2019, the value of refuge improvements that benefit local residents continues to climb.

“It is truly heartwarming to see how volunteers from the Union Sportsmen’s Alliance mobilized to help improve the visitor experience for everyone at John Heinz National Wildlife Refuge,” said Margaret Everson, principal deputy director of the U.S. Fish and Wildlife Service. "I greatly appreciate their efforts, which are symbolic of how much the refuge is part of the local community.”

“Whether organizing a project or rolling up his sleeves on site, John leads by example,” said USA CEO and Executive Director Scott Vance. “In addition to his efforts with the John Heinz project, he has been a driving force in the USA's Annual Tri-State Conservation Dinner since its inception. He also helped organize the construction of more than 100 pheasant transport boxes for the New Jersey Division of Fish and Wildlife, aiding the release of pheasants for public hunting on more than 20 wildlife management areas around the state.”

"I am grateful and humbled to receive this award," Stahl said. "It was very much appreciated but not expected. I don't do this for the recognition. I enjoy giving back, and my biggest motivator is having unions and their members involved in their communities."

The Conservation Steward of the Year selection process begins with the nomination of potential recipients by peers or union leadership. From this pool of nominees, USA staff select individuals who have had the greatest impact on the USA’s mission, represented their unions in the most exemplary fashion, and made the biggest difference in their local community.