For Gregory T. Revard, Labor Day will mean even more to him than ever before. 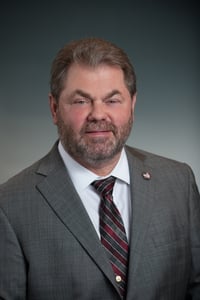 On a day designed to honor the nation’s workers, Revard officially began his tenure as General President of the Insulators Union.

A second-generation Insulator, he followed in the footsteps of his father, Joseph A. Revard. While his father
helped influence his decision to become an Insulator, other family members played a role as well.

Many members of Revard’s family are connected to the union, from uncles Leeman and Tom, to his cousins, nephews, a godson and his son Ryan.

After his honorable discharge from the Navy, he bounced around searching for a career. Fortunately, his dad and Uncle Tom intervened on his behalf and sponsored his apprenticeship application.

After spending nearly four years as a permit worker, he was initiated into HFIAW Local 47 Grand Rapids on Nov. 10, 1982.

The leadership and dedication he displayed allowed him to quickly rise through the ranks, becoming a Local Executive Board member, JATC trustee and asbestos abatement instructor. He was elected Business Agent in 1991 and four years later, was voted in as the Local 47 Business Manager/Financial Secretary. 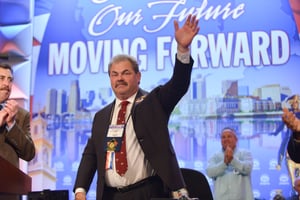 Revard’s involvement extended past the Local, as he served as President of the Central States Conference and as an Executive Board member for the Michigan State Building and Construction Trades Council.

In 2003, he was appointed by then General President James Grogan to be the union’s second Organizing Director, a relatively new position with bright goals for the union.

More than a year later, Central States Conference International Vice President Gary Fujawa retired, and Revard was appointed to the position. During the 2007 Convention, delegates elected him to the position, something they did again in 2012.

When President Grogan retired in 2015 and General President James McCourt was appointed as the union’s
new leader, the General Executive Board voted Revard to become General Secretary-Treasurer.

“We are all grateful for McCourt’s leadership, honesty and integrity,” Revard said. “I thank him for his expertise
and becoming a trusted friend through the five years we served together.”

Now as the new General President, Revard plans to build upon the work started by McCourt. He wants to
further promote initiatives to better the union through organizing (adding new members and growing market
share), as well as a continued focus on education and training.

“These are the keys to survival and with a well-trained workforce, I am optimistic for the future of our Union,”
he said.

Revard is the first (and only) Central States Conference member to hold the position of Organizing Director,
General Secretary-Treasurer and General President.

Central States Conference International Vice President Patrick Barron, who followed Revard in that position, believes Revard is the right man for the job.

“I have worked with him for many years. There is not a more loyal, dedicated and hard working Insulator in our International,” said Barron.

“He embodies the commitment and hard work to the highest degree. Our Union is proud to have him as General
President,” Demarius added.