Insulation Industry International Apprentice and Training Fund Administrator Thomas A. Haun is set to retire at the end of 2020, after 22 years of leading the International Training Department, and 46 total years of industry experience.

A second-generation Insulator, Haun was born in 1954 and graduated from Wheaton High School in 1972. Two years later, he joined Local 24 in Washington, D.C. as an apprentice. He earned his Mechanics card in 1978.

In 1987, Haun was named Local 24’s Director of Apprenticeship. He spent seven years in that role and five years as the Director of the Applicant Mechanic Program. He also served as Local 24 Business Manager and Financial Secretary for four years. During his time at Local 24, Haun’s leadership roles often overlapped.

Haun spent two years as the IIIATF Lead Abatement Coordinator before being appointed as IIIATF Administrator in 1998 by then General President William G. Bernard.

In 2005, Haun took the training curriculum to the next level. He revised the training material and IIIATF curriculum and had it evaluated by American Council of Education, who then deemed those completing an Insulators apprenticeship can receive 45 college credits.

This positively impacted the apprenticeship program and every single member who completes it, as they became eligible for free higher education credits. For the past 15 years, apprentices who top out have nearly three-quarters of the credit hours required by most community colleges to obtain an associate’s degree.

In addition to organizing and advanced training performed by the industry, Haun greatly impacted the Union through his assistance in the development and implementation of the International Professional Craftsman Code of Conduct (PCCC) and International Quality Control Craftsman (QCC).

Since 2007, Haun has served as Trustee to the Heat and Frost Insulators Labor Management Cooperative Trust, and worked extensively on remodeling and maintaining the International Headquarters over the last decade.

“Brother Haun has worked tirelessly and devoted his years of service in this trade as a true professional, who led by example proving that excellence is something to aim for every day,” said General President Emeritus James P. McCourt. “He has always put his heart into his work and his contributions have touched the lives of a lot of Insulators along the way.”

Since he was appointed IIIATF Administrator 22 years ago, McCourt called Haun a driving force behind the growth and success of the International’s training efforts.

“Moreover, his wisdom and leadership abilities have served as a guide for all individuals directly associated with training programs across the United States and Canada,” McCourt added.

Haun’s work did not go unnoticed by his peers, who presented him with the training industry’s highest award. In 2005, the IIIATF Trustees bestowed upon him the W. F. Pablo Blieker Award, which is given out annually to recognize a deserving individual who exemplifies the same qualities and dedication to the industry and training program as the award’s namesake, W.F. Pablo Blieker. Haun received the award the same year Blieker passed away, making the award more special to him.

“He has lived by the words of W.F. Pablo Bleiker the late apprenticeship pioneer out of Local 118: Order is the way to success; nothing is given to us; success demands work, perseverance and honesty,” added McCourt.

During his career, Haun served the Union under four International General Presidents – Bernard, who appointed him, followed by James A. Grogan, McCourt and now Gregory T. Revard.

“Brother Haun has always been a devoted educator. His passion and dedication to our union and training program is unmatched,” said General President Revard. “He has truly been a utility player for the International, across all departments, and his level of unionism has impacted our industry beyond measure.”

Last year, in anticipation of his retirement, IIIATF Trustees appointed John L. Stahl as Haun’s replacement. Since January 2020, Stahl has worked with Haun, receiving a full year of training before he takes over the position on Jan. 1.

“Over our careers, we all recognize someone that is highly respected and recognized as a true professional,” said Stahl, as he reflected on Haun. “Back in 2006 as the Local 14 Apprentice Coordinator, I went to my first Apprenticeship Conference and Master Apprentice Competition and was lucky enough to meet such a person, Tom Haun.

“Over the past 14 years I not only got to know him on a professional level, but also on a personal level. I not only respect him, but I consider him as a role model for all in the Insulators Union. I consider myself lucky to have been chosen by the
IIIATF Trustees to follow in his footsteps. However, I fully realize the difficult task of following up behind someone so respected throughout the union and in the building trades,” Stahl added.

Throughout his career, Haun’s work made an impact at the Local Union level and also in the lives of members.

“For much of my career as a member of our great Union, I have looked up to Tom Haun as a leader and a mentor. I am so very grateful for his counsel and guidance over the years,” said by Local 24 Business Manager and IIIATF Steering Committee member Brian Cavey. “Having the opportunity to work with him has made a profound difference in my career, and frankly, in my life.”

“His sense of dignity and personal humility has earned him the friendship, respect and position of high regard on the part of fellow members and apprenticeship students past and future,” said McCourt. “Congratulations on your retirement, you have been an asset to this great International Union.”

We congratulate Haun on his storied career and marvel on the impact he has made on our Union and on the building trades overall. We wish you and your wife Patt, along with son Thomas and daughter-in-law Michelle, daughter Allison and son-in-law Jim, and grandchildren Thomas Ellis, Anna and Evans many years of happy retirement. 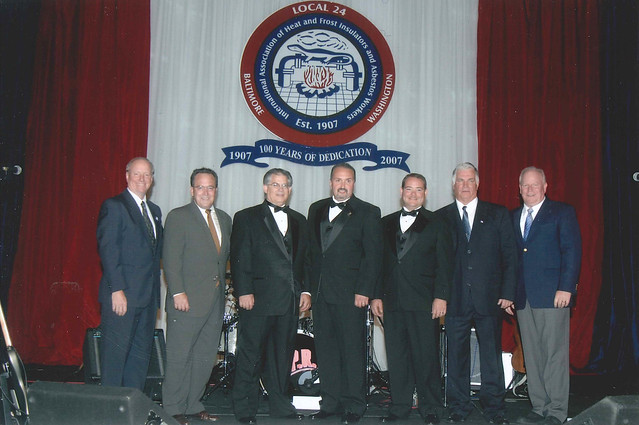