Tradeswomen from all over North America took part in a webinar event in March that was designed to take the place of last year’s Trades Women Build Nations in-person event, which was cancelled due to COVID-19 safety precautions.

Held on the morning of March 5, the TWBN Winter Webinar was one of two online events hosted by the North America’s Building Trades Unions (NABTU) designed to help empower female building trades members. The theme of the winter webinar was “Women Empowerment in Union Construction.”

A second webinar, which will follow the same format, is expected to take place in the summer.

The winter webinar began with opening remarks by North America’s Building Trades Unions President Sean McGarvey. He told the participants that tradeswomen are a top priority at NABTU. 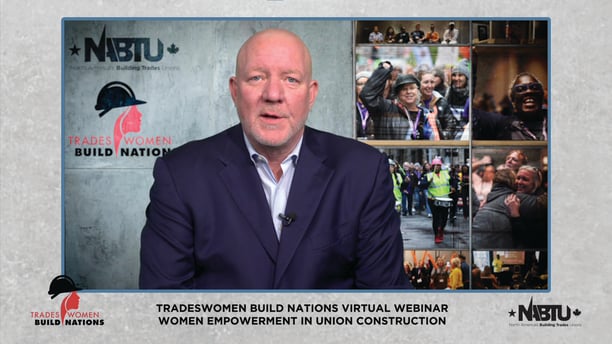 “Your voices matter,” he said. McGarvey then stressed how NABTU values diversity and equity as they continue to fulfill their commitment to prioritize inclusion, justice and belonging on all fronts.

“We will continue to attract and retain more women due to the work currently being done,” Strickland said. 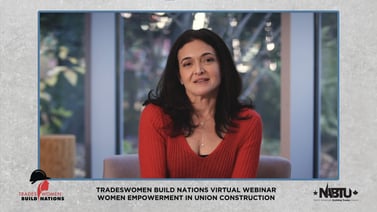 Sheryl Sandberg, founder of LeanIn.org, provided a brief overview of her organization, which advocates for better public policies for women, and a more equitable workplace in order to make lasting change. She is also the Chief Operating Officer at Facebook where she is able to put equality in the workplace culture in practice. Once the opening speeches were finished, participants then joined one of three breakout panels.

The topics included Retention and Recruitment: Strategies for Tradeswomen to advance in the Trades; Times
They Are A-Changin: Legislative and Federal Updates and the Benefits for Tradeswomen; and A Culture of Care Series: Lean in Circles for Tradeswomen – Mentoring and Connecting Over Shared Experiences. 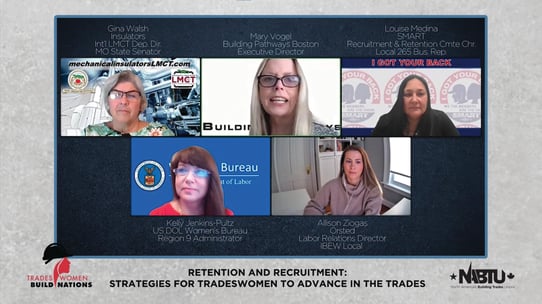 The HFIAW was represented in one of the break-out sessions by LMCT Deputy Director Gina M. Walsh, who
was a Retention and Recruitment panelist. The panelists shared their experiences entering their respective trades.

Sister Walsh discussed how she entered the trade during affirmative action and realized building trades leaders were selective in who they brought into the union.

As a result, she worked diligently to find tradesmen to mentor her and help her on the jobsites. “This is the first thing I tell apprentices,” Walsh said. “Find a mentor and let them help you.”

The panel discussed the obstacles facing women who seek nontraditional employment in the construction industry and solutions to potential industry barriers.

When Walsh began her career, she went two or three years without seeing another female on a jobsite. Oftentimes, she tried to be invisible on the jobsite. Today though, she feels women need to take a different approach and be visible. “Own your job,” she said. “I hope the current generation of women learn from me and my generation. The incentive to stay in the trades is to make a living wage.”

Walsh also stressed the importance of taking advantage of work opportunities. She chased overtime and took whatever jobs were available – even if they were in rural areas.

She urged tradeswomen to do the same.