The 9th annual Conference, which not only helps to promote women in the building trades, but also provides them with speakers and workshops geared to helping them be successful and advance in the industry. 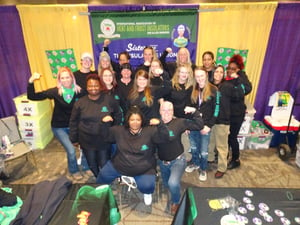 This was the third consecutive year the HFIAW provided financial support to encourage our union Sisters to attend. During the first weekend in October, more than 2,800 tradeswomen and tradesmen met in Minneapolis surpassing the previous attendance record for the event, which was set last year in Seattle. The Insulators were proud to have over 175 Sisters and Brothers in attendance.

Participation by members of the Insulators Union has increased year-over-year, and the IIIATF proudly announced that 46 Local Unions, with at least one Local from every Conference, took part in the conference.

McGarvey welcomed all attendees and thanked everyone for their dedication to the industry by wanting to spend the weekend with thousands of Sisters. “Our movement is your movement, our progress is your progress,” McGarvey said as he detailed the various forms of support NABTU offers the building trades. 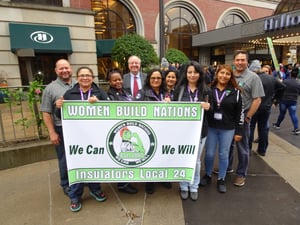 Shuler, a current IBEW Sister and the AFL-CIO’s first elected female leader, urged all attendees to be empowered and to offer support to other women in Unions. “We are making changes in our movement,” she said.

Her speech focused on empowerment and the ability to empower others. She discussed how she was able to get support and mentorship from the males around her in order to be successful in her career.

U.S. Supreme Court Associate Justice Ruth Bader Ginsburg sent a video message to the attendees. As someone who broke a gender barrier, she gave a heart-felt message to those women paving the path for future women in the building trades.

Several breakout sessions were offered on Saturday and Sunday with members of the Insulators Union present at the following
sessions: Building a Women’s Committee; Building Trades Multi-Employer Plans and Benefits; C.O.R.E. (Critical Organizing and Recruitment Education); How Unions Can Best Engage Millennials and Nurture Their Energy; How to Run for Office
In Your Local Union; Learn Who Has What; Where: Pregnancy Accommodation and Paid Maternity; LGBTQ+; Deconstructing Gender and Working with And Supporting Trans And Gender Diverse Folks in The Building Trades; Policy Matters: Legislation, Regulations and Initiatives to Benefit Tradeswomen; Respectful Workplace (DOL-Women’s Bureau); Sexual Harassment: Preventing and Addressing Sexual Harassment; Suicide Prevention/Opioid; Surviving and Thriving in Apprenticeship; Tradeswomen Advocacy 101; and You Can Have It All – Build Your Support System to Success.

Local 45 Sister Lynette Jones led the Caring for Hair and Skin When You Wear A Hardhat session. 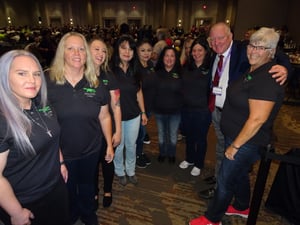 Local 118 Vice President Ashley Duncan eagerly attended the Lean In session and came away impressed. “I’ll be participating and coordinating on the roll-out of Lean In with Build Together BC,” she said. “It was nice getting an overview prior to starting. Very insightful on how other women handle issues and problems on the job.”

On Saturday, the Insulators held a union-wide caucus, where Sisters and Brothers heard from Union and Training leadership in attendance. During the caucus, Local 1 Sister Ashley Cougill was awarded a Certificate of Recognition for her acts of unionism over the past year.

Walsh is now the highest-ranking female in the Insulators Union. She comes to this position with extensive experience as a proud Union Sister and with a rich history of political experience. Walsh was praised and received a standing ovation from her Sisters and Brothers after Revard’s announcement. 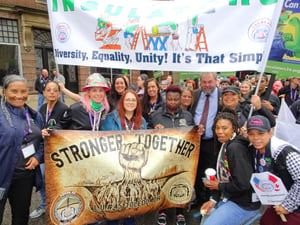 The group then joined the NABTU Trades Parade in the streets of downtown Minneapolis. In addition to the Sisters carrying banners promoting the trade and their Locals, many of our union Brothers participated and walked side by side with our Sisters in solidarity.

“I feel the more Insulators attend the conference, the more positive influence it has on our union,” said Local 17
Sister Alexandria Gray.

Local 18 President Kim Patrick appreciated the solidarity shown by conference attendees. “This is just one more way the leaders here can show and act on their support for the conference and for the women who are in our trade,” she said.

Local 2 Sister Samantha Lippert-Kendall encouraged all women and Local Union leadership to attend. “It is not just about numbers, but about the connections you are making with the peers who are there,” she added. “We are a support system, and being a female in the trade, we are there to support and we do support each other.”

Local 86 Sister Crystal Cantrell, the first appointed female on the Local 86 JATC Committee, came away from the weekend committed to be an asset to her Local Union. She learned how to take the steps to help diversify her Local, which starts with recruitment efforts.

At the conclusion of the final plenary, Washington D.C. was named host city for the 2020 TWBN Conference. The Insulators Union will continue to update the https://www.insulators.org/wbn page with any information related to the conference. Please continue to check this page for updates.