Terry Hermanson retires after 51 years of service to the International

Terry Hermanson retires after 51 years of service to the International

In 1971, Walt Disney World opened in Florida, the voting age was lowered to age 18, the most popular song was “Joy to the World” by Three Dog Night and the movie Willy Wonka & the Chocolate Factory premiered. That same year, Terry Hermanson, age 17, started to work for the HFIAW.

On Dec. 31, 2022, the longtime Administrative Assistant to the International’s General President, retired. Just a few days after her 69th birthday, Hermanson ended a career that saw her log 18,811 days or about 51.5 years on the job.

She was hired to work in the International office on July 1, 1971, six months shy of her 18th birthday. Legally considered a minor, the recent high school graduate was required to get a permit to work as an office assistant.

Over the course of the next half-century, Hermanson served in multiple roles in the International Office as she worked her way up through the organization. She was promoted to her current position in 2006.

In 2021, to commemorate her 50 years of dedicated service to the Union, the General Executive Board, department heads, Regional Organizers and retired leadership celebrated with Hermanson on a video conference (due to the pandemic) and gifted her flowers and a vehicle.

General President Larkin wishes Hermanson well on her retirement. “Everyone in this organization has felt the effects of Terry Hermanson, and no one can replace her,” he said. “I wish her a relaxing and enjoyable retirement.”

Haun expressed his heartfelt congratulations to Hermanson on her storied career and called her dedication to the Union unmatched.

“She always helped everywhere she could and did her best her entire career,” he said. “Her industry knowledge spans decades and was a huge asset to the Union. I am proud of her for transitioning to making time for herself. She deserves to enjoy retirement life after all she did for our Union.” 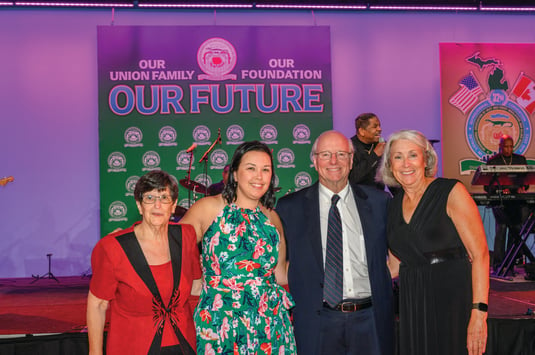 Our Union is better because of Hermanson’s decades of hard work and dedication.

Thank you, Terry, for everything you did for the International and for all those you helped along the way. We wish you good health and a long and relaxing retirement.