Snow and cold temperatures on the first day put rutting bucks on the move in the high country near Wellington, Colorado. Payeur, USA host Sam Phipps, and their guide glass hundreds of animals waiting for the right opportunity. When they find the bruiser buck the guides nicknamed "Frank the Tank," they put on a stealthy stalk to get in range, but gusting winds make the shot anything but guaranteed. 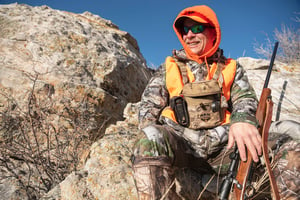 The Brotherhood Outdoors cameras also follow the Insulators Local 1 member to Missouri, where he and his son, Chris, volunteer their time to insulate a new steam pipe system at a local food pantry.

“My grandfather was the first of our family to belong to Local 1, followed by my father, uncles, brother, me, and my sons—so everything the family has is because of the union,” Payeur said. “Doing volunteer work is just one way we can give back to the community.”

Watch Payeur’s mule deer adventure on Brotherhood Outdoors when it airs on the Sportsman Channel Tuesday, August 25 at 4 p.m. Eastern with re-airings on Friday at 11:30 a.m., Saturday at 1:30 a.m., and Sunday, August 30 at 11 a.m.

For a complete list of upcoming episodes, visit www.brotherhoodoutdoors.tv. To watch episodes from past seasons, visit www.myoutdoortv.com.

Union Sportsmen’s Alliance (USA): The USA is a union-dedicated, 501(c)(3) nonprofit organization whose members hunt, fish, shoot and volunteer their skills for conservation. The USA is uniting the union community through conservation to preserve North America’s outdoor heritage. For more information, visit www.unionsportsmen.org or connect on Facebook, Twitter, and Instagram.

Sportsman Channel: Launched in 2003, Sportsman Channel/Sportsman HD is a television and digital media company fully devoted to honoring a lifestyle that is celebrated by millions of Americans. A division of Outdoor Sportsman Group, Sportsman Channel delivers entertaining and informative programming that showcases outdoor adventure, hunting and fishing, and illustrates it through unique and authentic storytelling. Stay connected to Sportsman Channel online at thesportsmanchannel.com.