In January 2017, the International Organizing Department hosted an Organizing Conference where most of the training focused on a newly updated version of COMET. Labeled COMET III, the new material focuses on encouraging rank and file members to become union activists and volunteer Organizers.

It teaches them about strategic organizing campaigns and tactics, and emphasizes the importance of membership participation and involvement in their Local Union's organizing activities.

COMET training was created in the mid-90s, when the National Building and Construction Trades Department (NBCTD) realized unions were declining at a rapid pace. At the time, it appeared imminent that if something wasn't done, the majority of NBCTD Unions would be virtually nonexistent within 15 to 20 years.

The biggest threat causing the potential decline was identified as members’ negative attitude toward non-union craft workers and our hesitation to organize them into our Local Unions as new members.

To reverse this negative attitude and decline in union density and market share across North America, the NBCTD developed a membership education program designed to change our member's attitudes about organizing. The program was named COMET, an acronym for Construction Organizing Membership Education Training.

COMET was designed to focus our member's attention on the realities of the labor movement's decline. COMET taught our members the historical background of organizing, such as what unions did at the turn of the 20th century to strengthen and empower their workers to earn the respect of politicians, employers, all while being champions for good wages, benefits and the promotion and passage of laws and regulations that protect workers. 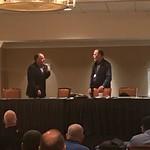 COMET also taught our members what has been done incorrectly when it has come to organizing, such as our country club attitudes and allowing our signatory contractors to employ large numbers of non-member/permit workers, which limited and reduced our union’s membership numbers. The decline in union membership can be directly correlated with weakened bargaining strength, loss of political influence, and the erosion of laws and regulations that protect workers.

In the 1990s all NBCTD International Unions adopted and supported COMET. However, member attendance at COMET training was on a voluntary basis. As a result, COMET was not accomplishing its' objectives.

Our International Union's delegates made a bold decision at our 1997 Convention by passing a resolution that made it mandatory that every Local Union affiliate be required to make all their active members attend a COMET training class. This mandate is still in effect today.

During the late 1990s, most of our International Union's members attended and successfully completed a COMET class. During the early 2000s, after nearly all our existing active members had been COMET trained, the JAC's were assigned the responsibility of conducting the COMET training to ensure that all new members going through the apprenticeship programs would be trained.

The material taught in COMET is based on union market share and densities. Over time, the data contained in the graphs and charts became outdated.  During the mid to late 2000s, the COMET curriculum was updated.

In 2011, the COMET training material was updated again to keep up with the ever-changing statistics. The updated version remained the same (COMET II), but had more emphasis on the how to organize and pointed out the importance of membership involvement with their Local Union's organizing activity.

The updated COMET II is designed for Local Union members that need exposure to the “Why Organize” and “How to Organize” classes before they attend the COMET III “Union Activist Volunteer Organizer” class.

Both COMET II and III curriculums are available for download from the Organizing Management System's Library, so Local Unions can print as many copies as needed for classes. Some materials are in Microsoft Word or Excel format so the material can be modified/customized by each Local Union.