After a one-year hiatus due to COVID-19, the North America’s Building Trades Unions Legislative Conference was held for the first time ever as a virtual event in 2021.

More than 3,000 delegates, representatives from all 14 affiliated building trades, joined remotely to “attend” the conference, which was held on June 5.

“In the darkest days of this country, when no one knew which way was up, you kept working. You are essential,” McGarvey said to the online delegates. “You, Brothers and Sisters, are what is right about this country.”

McGarvey then highlighted the Biden Administration and the support the federal government is giving the building trades and its members, including pension relief, large projects and continually publicly promoting unions as a solution. He felt the administration has supported unions every step of the way.

“If the past few months are a sign of what’s to come as far as the poor, the working class, and the building trades are concerned – where we’re not just outside the gates, but actually have a seat at the table, and a voice in deciding critical economic, energy, and labor issues for our great nation -- Brothers and Sisters, there are even better days ahead for us,” McGarvey said.

His speech then shifted from federal politics to NABTU accomplishments over the last two years, including the Trades Women Build Nations Conference, apprenticeship readiness programs and the fact that over a quarter of MC3 graduates are women. 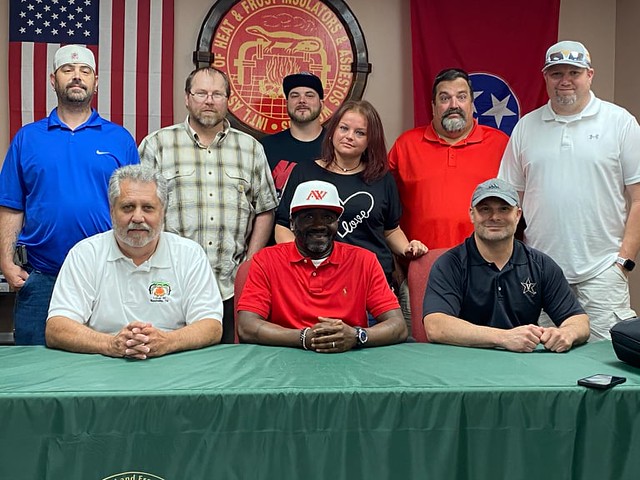 “The time is now to create ladders of opportunity, to provide opportunities to the underserved communities, to empower hard working Americans to unionize,” McGarvey said. “The time is now to finish this job and for the first time in our lifetime have a President who works for us,” he added.

Following McGarvey was House Speaker Nancy Pelosi (D-Calf.), who applauded the union-focused legislation that has already passed. She then discussed the need to pass the Protect the Right to Organize (PRO) Act and explained why it is important to give all Americans the opportunity to organize and join a union.

Pelosi also urged all in attendance to contact elected officials and tell them to pass the American Jobs Plan so unions can continue to grow thanks to the influx of federal funding the plan would create.

Senate Majority Leader Chuck Schumer (D-NY) followed Pelosi and focused his speech on the growth opportunities for trade unions through the American Jobs Plan and the PRO Act.

“We will see growth of our construction industry through federal projects with the infrastructure plan. We will work to ensure all federal projects are done under a project labor agreement. Every federal dollar should be union labor,” he said. “Once America is unionized, protecting workers from the bosses and getting rid of the scabs, we can truly bring up the union workers.”

U.S. Secretary of Energy Jennifer M. Granholm then spoke on other aspects of the infrastructure bill. She made a specific reference to the Insulators Union while talking about good, green jobs.

“We are betting on American workers to win,” she said. “You are the ones that keep the lights on and the trains running. You are the ones that have built our public infrastructure. Your safety standards ensure that all workers go home to their families every night. America owes you a great debt, and that’s why this administration is laser-focused on seizing the opportunity of the clean energy economy for union workers.”

The next set of guest speakers included House Ways and Means Committee Chair Rep. Richard Neal (D-Mass.) and U.S. Secretary of Transportation Pete Buttigieg. “Unions are going to be indispensable to building our future,” Buttigieg said. “I hope it is clear to see where this administration stands -- it is on your side.” He explained why this is the best chance to transformthe country’s infrastructure with a union workforce.

“These jobs are real and available to the American people if we have the vision and the support for the American Jobs Plan Act,” Buttigieg said.

Topics of the workshop included the American Jobs Plan; registered apprenticeship programs; labor standards such as local hire and community benefit agreements; and clean energy developments. Following their updates, there was a question and answer segment. Topics related to the Insulators Union included green and clean energy efforts.

The final portion of the Legislative Conference was a workshop regarding multiemployer pension plans, something that affects all building trades, various district councils and Local Unions.

The workshop was led by the National Coordinating Committee for Multiemployer Plans (NCCMP) and discussed the special financial assistance program, outlined the Pension Benefit Guaranty Corporation’s (PBGC) current rules and processes and COBRA premium subsidies. Again, attendees of the conference had a chance after the presentation to ask questions and engage with the presenters.