Thanks in part to members of Insulators Local 80, a once shuttered plant has new life.

Along the banks of the Ohio River, in the small community of Apple Grove, WV, one polymer plant has been a mainstay in the area for over 60 years.

Originally built and operated by Goodyear Tire and Rubber in 1959, the facility  was sold to Shell Chemical in 1992 and eight years later, sold again to M&G Chemicals.

While the owners of the plant have changed, one thing has not changed - members of Insulators Local 80 working to fulfill the insulation needs of the facility.

The plant was an important part of the economy and daily life of the surrounding community until late 2017, when M&G Chemicals declared bankruptcy. On Oct. 24, 2017, the plan ceased operations and 130 M&G employees, in addition to all of the contracted building trades members, were laid off.

While the search was on for a new owner, a group of 16 managers, engineers and supervisors worked through a restructuring firm to maintain the facility in order to help it  maintain its value. Manufacturing Site Manager Richard Maack, who started with the plant in 1993 said this group worked to make the bankruptcy court aware shuttering a chemical plant was not like shutting down a department store.

“The reduced crew of tradesmen volunteered to stay at the plant to maintain health, safety and environmental compliance. We also ensured the plant’s equipment was kept in good mechanical and electrical condition,” he added.

The former employers cooled the reactors, properly stored the chemicals and safely shut down the plant. During the winter of 2017-2018, they also performed preventive maintenance work on the equipment to ensure it remained in good operating condition.

For those who stayed and worked at the plant, there was no promise of pay and perhaps more dauntingly, there was no guarantee the plant would reopen. The core group of workers performed the work on faith and the hope the facility would be sold to a new company, so all employees could return to work. 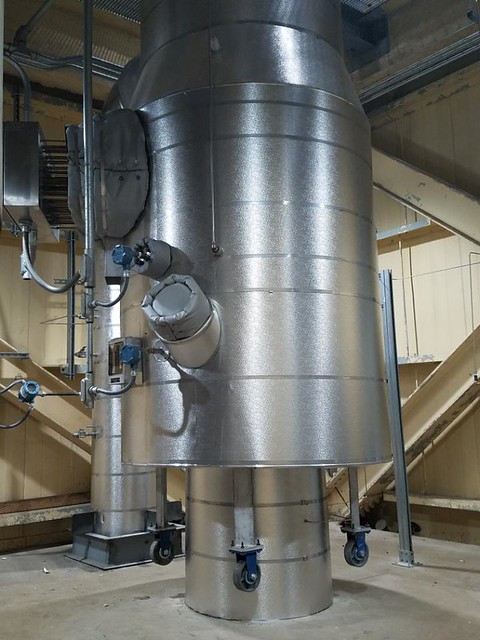 During this time, several companies and the region’s Labor Unions reached out to these employees, understanding what had transpired and offered their services to help revive the facility. The former employees, local and state organizations all threw their support into the effort to revitalize the plant, which meant so much to the area.

In March 2018, the Far Eastern Group emerged victorious from the bidding process and purchased the polymer plant.

In July 2018, the plant welcomed back workers. Operations were restored at APG Polytech and there was a 97 percent return rate for former workers, many of them from United Steel Workers Local 644.

During the plant recommissioning, Local 80 was once again onsite to meet the needs of restoring the plant, quickly, with all of the insulation work, which needed to be completed.

Additionally, in an effort to become more competitive, APG immediately began to invest in new technology and improvements. After the plant was restarted, new equipment was installed and significant work was done throughout the year to improve the production process.

Insulators Local 80 played an instrumental role in technology installation, which helped the plant become competitive in the industry.

Holding everyone to a high standard, Local 80 Superintendent Brian McClure asked for only the  highest quality of work and craftsmanship from the Local 80 members on this project. McClure knew what was at stake, as there was a substantial amount of work to be completed in a relatively short period of time.

A total of 29 Local 80 members worked on site, with one shift working traditional hours and other shifts working nights and weekends in order to stay on schedule.

“The Insulators working on the project from Local 80 completed all of the work on time, on schedule and within budget,” Maack said.

In addition to all work being finished on time, the insulation work was also performed in a safe manner, with no lost time to accidents during the project.

Thanks to dedication and effort of all workers, APG Polytech now produces polyethylene terephthalate (PET). This plastic resin has properties such as strength, flexibility, stability and sustainable recyclability, which makes it a popular product for bottles and food packaging.

The future outlook for APG is good.

Once left for dead, the facility is now thriving and hiring new employees. The company continues to invest in new technology and expand at the site. The Far Eastern Group’s expertise in post-consumer recycling (PCR) is expected to play a significant role as the company looks for additional opportunities in the industry.

When considering all of the new work and expansion opportunities Maack said APG will continue to use union Local 80 insulators for future work, whenever possible.

“The quality of work and full understanding of what’s required is what can be expected when you consider using the Skilled Trades Unions such as Local 80,” he said. “Brian and his team continue to do tremendous work at our facility, in a safe manner and we certainly consider them part of our success story.

“What happened at APG Polytech is indicative of the dedication and loyalty you will find in the West Virginia workforce,” said Maack. “The people in this area are committed to not only their own success, but also to the success of the companies for which we work and the communities in which we live.”