Building trades members, including those from HFIAW Local 7, struggled through numerous roadblocks and protests as they performed work to get a new Liquefied Natural Gas (LNG) refueling port in the Tacoma/Puget Sound area up and running.

Puget Sound Energy was a driving force behind this project and the relationships between the Building Trades and PSE played a critical role in keeping the project moving forward.

Going back to 2012, the LNG facility began building what they could without a permit. It was at this point that the Insulators started working through general services like freeze protection, to get the facility about halfway built before various permits were needed to proceed.

Company representatives understood the need for the project, as did members of the trades, but in order to finish the remaining work, the project needed to acquire key funding tied to conversion incentives and funds set aside by the Obama administration.

From a public relations standpoint, PSE also needed to convince elected officials, bureaucrats, environmentalists and the public about the importance of the project. According to scientific evaluation by the Puget Sound Clean Air Agency, an LNG plant would reduce carbon dioxide emissions by replacing one fossil fuel (bunker fuel) with a cleaner burning fossil fuel (liquefied natural gas).

The News Tribune reported the LNG plant would provide about 6 million to 8 million gallons of LNG for local customers during peak winter demand. Puget Sound Energy said the site would boost the reliability of the fuel supply for Western Washington.

By transitioning from a dirty fuel to a cleaner fuel, PSE was working to reduce its carbon footprint. LNG is quickly catching on as a preferred fuel for the shipping industry. As evidenced along the U.S. coastline, some of the largest vessels in U.S. maritime waters have been converted to use LNG, and more vessels are being converted from diesel to LNG every day.

Once operational, TOTE Maritime Alaska vessels, which transitioned from diesel to natural gas, will use the new refueling port in order to complete the transfer of goods between the state of Washington and Alaska. 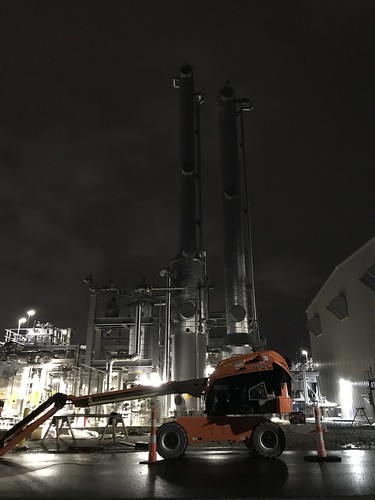 Besides an increased demand for this cleaner burning fuel, the Insulators also benefit from the opportunity to continually service the shipping industry to help it safely transport goods. Ultimately, this will result in more work for our members.

While members of the building trades understood the need for this project, some members of the community were staunchly against it, which hindered progress. Some environmental groups and indigenous residents opposed the project. Over the past 10 years, numerous lawsuits were filed and hundreds of demonstrations took placed in an attempt to halt the project.

“If they (protesters including the Puyallup Tribe) try to kill (the LNG plant project), if they can convince Puget Sound Clean Air Agency to ignore the science and ignore their own data, which shows that its good for the environment, then they will end up with nothing. And we will continue to have carbon intensive polluting fuels in the ships in Puget Sound and that is utterly irresponsible,” he said.

The efforts to stop the construction of the LNG plant did not work, however, but it slowed progress, adding years to the timeline and drawing out the permitting process.

Local 7 was proud to work alongside the Brothers and Sisters of the other building trades unions to move the permitting process along by being part of the active campaign for the development of this project. In the long run, they knew the environmental and air benefits far outweighed the opposition concerns.

Eventually, this project was given the green light to resume construction. As a result, Local 7 members are working on this “yellow card” site.

The Merchant Marine Act of 1920, commonly known as the Jones Act, ensures the work on this project is not outsourced. The act deals with coast-wide trade and requires all goods transported by water between U.S. ports be carried on U.S. flag ships, constructed in the U.S., owned by U.S. citizens and crewed by U.S. citizens and U.S. permanent residents.

Additionally, the yellow card facility designation is something Local 7 has not had in the territory since the 1980s, making this an unusually successful project.

Local 7 Business Manager Todd Mitchell wants this project to be an inspiration for future work. “We have the opportunity to do this in more places,” he said. “With an effort to streamline the permitting process and enable the facilities that put our members to work, we are working for the best interest of our members and our Union.”

Over the last two years, working under the sub-contractor BrandSafway, Insulators have logged almost 15,000 hours, with no accidents or recorded first-aid safety concerns.

“I am really proud of our members and their activity and involvement in making successful projects move forward” Mitchell added.

Thank you to the Local 7 Brothers who have worked at the LNG facility and been a great representation of our Union.

Local 7 Mechanics: Richard Blanchette, Gary Bowers, Garth Dire, Christian Hernadez and Rob Robinson. Because of the conversion of the plant, there was also a direct opportunity for Safway Services to work over 1,700 hours at the TOTE Maritime facility, transforming vessels to use natural gas.