The International Association of Heat and Frost Insulators and Allied Workers Local 7 Business Manager Todd Mitchell was interviewed on a daily labor-focused podcast on April 29. 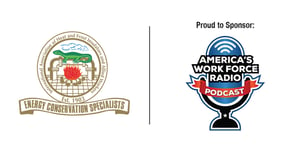 Hosted by Ed “Flash” Ferenc, America’s Work Force is the nation's only daily labor-focused radio and podcast program. Throughout the week, people from different corners of organized labor appear on the program to speak about their industry.

Mitchell then went into a chronicle of his career. He explained how he came up through the Insulators apprenticeship pr

Mitchell later explained legislation that he has advocated for that would further protect Insulators and others from asbestos exposure. In an effort to ban asbestos, legislation was crafted that ultimately reduces the permissible percentage of asbestos volume in materials from one percent to one tenth of one percent.ogram, worked as a liaison for Helmets to Hardhats and then returned to the trade.

He went on to say that the legislation also requires cataloging of old building materials and areas of manufacturing sites that may still have asbestos present. This is meant to inform those working near asbestos to be vigilant and take the proper steps to protect themselves from exposure.

With aspirations to bring the legislation to the federal stage, Mitchell said that the current political climate is not favorable to legislation such as that implemented in Washington state.

You can listen to the interview here: