A historic hospital that served New Orleans residents for centuries, only to be shuttered by Hurricane Katrina, is coming back to life. The bold $300 million project is covered by a Project Labor Agreement, which is already benefiting HFIAW Local 53.

In 1736, Charity Hospital opened to serve the greater southeast Louisiana area. For almost 270 years, the second oldest continuing operational hospital in the U.S. also served as the area’s premier teaching hospital. The hospital treated area residents during the yellow fever pandemic of the mid-1800s and regularly served one of the country’s largest populations of uninsured citizens, boasting the second Level 1 Trauma Center in the nation. By 1931, the organization moved into a new building and, by 1938, had opened an additional 10 satellite buildings.

In August 2005, Hurricane Katrina struck the area and life forever changed for most of Louisiana, especially for the people of New Orleans. The hurricane’s flood damage was simply too much for the hospital to overcome. Charity Hospital was forced to close.

In the years since Katrina, there have been several efforts to renovate or restore Charity Hospital. In 2019, a redevelopment plan was approved to transition the downtown building into an educational facility, that also includes retail shops and more than 375 residential housing units. 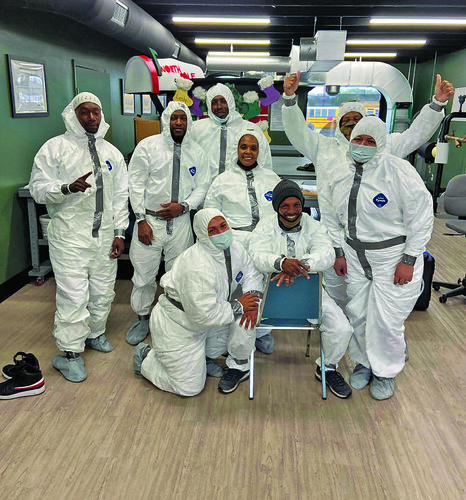 Tulane University will serve as the main tenant of the building as they will use some of the space for student housing and offices. The contract was awarded to a group called 1532 Tulane Partners, a joint venture between CCNO, a New Orleans based developer-builder, and El-Ad Group, an Israeli development company.

The renovation project is expected to cost $300 million for the 20-story downtown facility. The project is covered by a Project Labor Agreement with the Southeast Louisiana Building Trades and the Louisiana Workforce Commission.

“This project has been a long time coming,” International Vice President Leo A. Damaris, Jr. said. “When I was a child and young adult, I was a patient at Charity Hospital. To see it uninhabited for so long after Hurricane Katrina and now coming back to life, supporting the citizens and the impact it will have on (HFIAW) Local 53, all under the work of a Project Labor Agreement, is a huge deal for our city.”

The PLA includes language that requires a New Orleans workforce be used to transform the building. It is expected to require up to 250 asbestos abatement workers at the peak of that phase.

The Louisiana Environmental Protection Agency and the Department of Public Works are involved in the training of new city residents to handle asbestos abatement.

In August 2020, Local 53 took part in the City Council meeting and then participated in a television interview to launch the application process to recruit New Orleans residents who wanted to be trained and obtain the proper license.

Through a coordinated effort with the Center for Construction Research and Training/Center to Protect Workers Rights (CPWR), a partner with the National Institute for Occupational Safety and Health (NIOSH), grants have been awarded for the accelerated training program.

“I have always been a New Orleans city kid and I have been working on this project for years,” he said. “I want to help the citizens of New Orleans and I want to get the grants that are available to make the most of the resources we have.”

Since then, more than 275 New Orleans citizens have been trained while being socially distant at a local building trades ballroom in preparation for the abatement work to begin. In the meantime, several of the students who completed the training have chosen to start a career with Local 53.

The Insulators work on the project was expected to start in March, and last for about a year on the main building. Work on the other 10 satellite buildings could result in decades of additional work opportunities for Local 53 signatory contractors to pursue.