For members of Insulators Local 5 in Los Angeles, this year’s Super Bowl was extra special, and it was not because a local team won the Lombardi Trophy.

Instead, it was a chance to see a project they worked on be the focal point of the world’s most notable single-game event.

Sitting in the midst of 298-acres that was formerly the Hollywood Park racetrack, the master plan calls for the stadium to be the center piece of a mixed-use development featuring retail, commercial office space, a hotel, new facilities for the NFL Network, residential units and outdoor park spaces.

The facility is the home stadium for two National Football League teams – the Rams and the Chargers. Besides sports, the stadium will host a wide variety of events ranging from art shows and corporate events to concerts and WrestleMania. 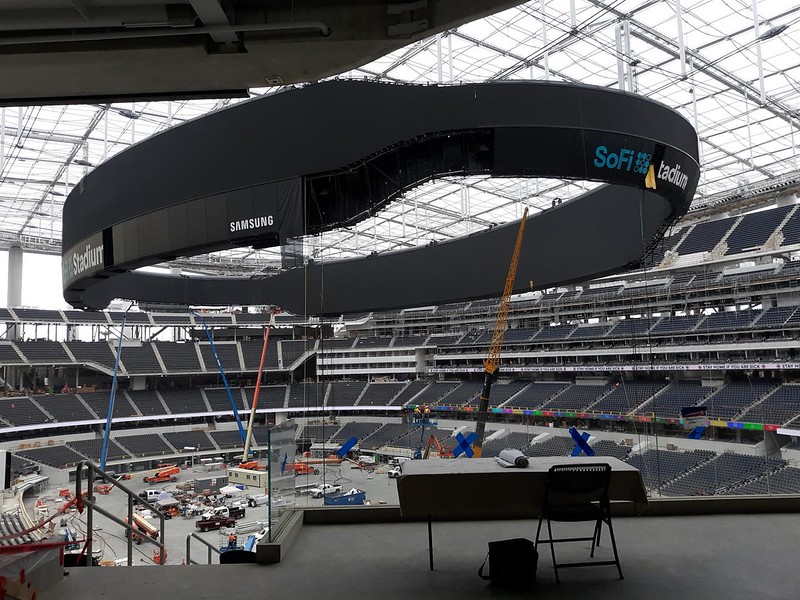 So far, members of the Insulators Union have logged more than 80,000 total hours on the entire project.

Work began in November 2016 on the most expensive NFL stadium ever built, and the venue opened its doors on Sept. 13, 2020, when the Rams hosted a primetime game against the Dallas Cowboys.

Like many projects built during the pandemic, construction workers had to observe COVID-19 safety precautions. While this complicated the project timeline, work was finished in time for kickoff of the 2020 NFL season.

Designed by HKS Architects, the state-of-the-art venue includes many firsts across industries, including in architecture, construction, engineering and technology. At 3.1 million square feet, it is the largest stadium in the National Football League. It is also the NFL’s first open-air, indoor-outdoor venue to be built.

According to an article in The Sporting News, the vast majority of the stadium does not have air conditioning or heating. However, the roof can open up, which will allow a breeze to help keep fans cool. Additionally, the roof panels are designed to pull heat out of the stadium, helping to naturally cool the facility.

However, suites and other specific areas within the stadium, including the locker rooms, are climate controlled.

SoFi Stadium is billed as a “Sustainable Event Management System” with adherence to ISO 20121 and LEED criteria. A joint venture from Turner and AECOM Hunt, the stadium’s listed capacity is 70,240 seats, but it can be expanded to 100,240 for major events like the Super Bowl.

Superintendent Terry Baptisa of Performance Contracting Inc. (PCI), said PCI’s scope of work includes plumbing insulation, firestopping and scaffolding. Work on the stadium is finished, but work on the overall project around the stadium is ongoing. As of March 2022, PCI has logged about 30,000 hours on this project, with more to come.

Besides the Super Bowl, SoFi Stadium is set to host the College Football Championship Game in 2023 and the Opening and Closing Ceremonies of the 2028 Olympic Games.