His record-setting catch weighed about 5.6 pounds more than the previous record holder.

For Pierce, this catch was a dream come true.

As a toddler, he fished for panfish in the Schuylkill River, near Philadelphia. The Schuykill is the first waterway he can remember fishing in, and it happens to be close to his home.

Over the past eight years, his focus switched from panfish to flathead catfish.

Brother Pierce knew the state flathead catfish record was set earlier this year and he was eagerly attempting to catch a larger fish. On May 24, Brother Pierce went fishing in the Schuylkill River getting to his favorite, rocky spot after 8 p.m.

At first, it seemed like this would be a normal day on the river for the Local 14 member, but when he saw the line stripping off his Baitrunner reel within seconds of making his first cast some 200 feet out into the river, he knew his day might take an unexpected turn. 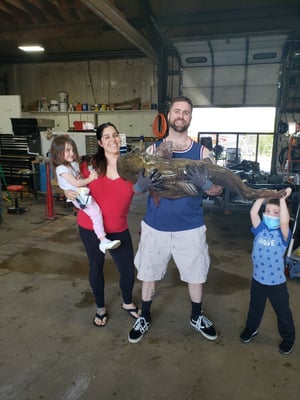 He set the drag on his reel and laid into the monster that had sucked in the trout head he was using for bait. It broke the surface of the water with a violent splash of its tail, something that Pierce has never seen a Catfish do in the past.

“And then it torpedoed away from me,” he recalled. Even with the heavy tension of the drag from his reel, the fish continued to strip line off the reel.

“I had my drag tight, and it was still pulling line. I knew it was something massive,” Pierce noted. “It ran until it ran into a rocky snag. I thought I was going to lose the fish. I couldn’t budge it.”

Using his years of experience, he finally reeled the behemoth fish in. He observed he had hooked something special and knew he needed to get it officially weighed and measured.

Reeling in the fish was just the start of Pierce’s challenge for the day, however.

Since he is a catch and release angler, the task of getting his prize catch to the closest weigh station proved especially challenging on the Sunday of the holiday weekend.

After the battle with the catfish ended, Brother Pierce tied the fish up in the river, allowing it to recover from the catch before transporting it.

Once he thought the fish was ready for transportation, he placed it in a 45-gallon plastic storage container, with an aerator to keep the water oxygenated.

He then travelled from the Schuylkill River to the closest weigh station, Blue Marsh Outdoors, in Burnville, Pa., which was over an hour away. Upon arriving at the weigh station, the fish was in excellent shape and was carefully measured.

According to the Pennsylvania Fish and Boat Commission, the fish checked in at 56.3 pounds and 50 inches.

The unofficial results stunned Pierce, who crushed the previous record of 50.7 pounds, which was set on April 6.

Following the paperwork and documentation process, Pierce was able to release his recording-setting catch back into the water.

About one week later, the Pennsylvania Fish and Boat Commission officially awarded him the new state record.

A member of Local 14 since 2008, Brother Pierce is an avid outdoorsman. The father of four enjoys passing his love of the outdoors and fishing on to his children, whenever possible.

We congratulate Brother Pierce for setting a new state record for flathead catfish in Pennsylvania and for having a commitment to the environment to release the fish he catches. 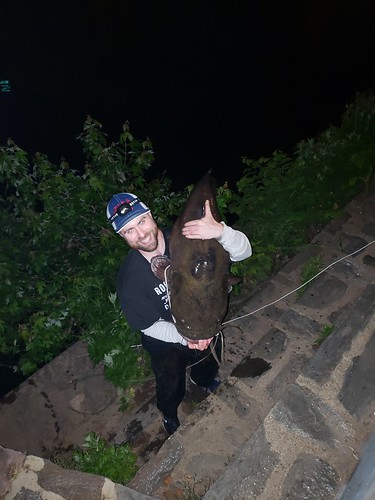