HFIAW Local 134 Business Manager, Financial and Corresponding Secretary Gary L. Guertin, 59, passed away peacefully on Feb. 2 surrounded by his family and loved ones.

Following high school, Guertin spent 20 years working a variety of jobs until he went to work at the Portsmouth Naval Shipyard on Sept. 10, 2001. In 2003, he became an apprentice and four years later received his Mechanics Card. In 2015, he was elected as the Local’s Business Manager.

Brother Guertin was a Convention delegate in 2017. He also served as the Vice President of the Metal Trades Council.

Besides being the Business Manager and Metal Trades Vice President, he was the Insulators Union steward at the shipyard.

“I learned this put Brother Guertin in a unique position — very different from Business Managers of our non-shipyard Locals,” said Reap. “He represented and handled grievances for all Insulators on the yard, not just members of our International. Witnessing him in action and in speaking with Insulators at the yard, I learned he represented workers passionately and professionally, regardless of their membership status.”

In remembrance of Brother Guertin, the members of Local 134 signed a hardhat (pictured) and presented it to his wife during a memorial service. 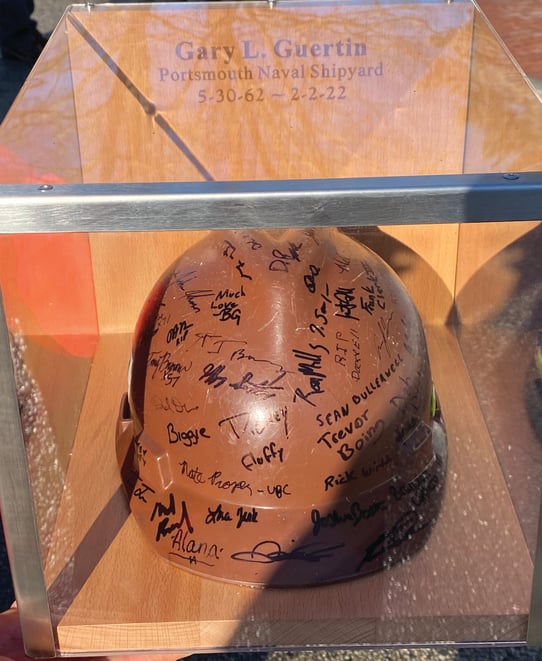 Guertin was a huge sports fan and attended countless Red Sox games with his father. Besides the Sox, he was a huge Dallas Cowboys fan. He also loved to travel, host barbeques and play cards.

“As is the case with many Insulators, Brother Guertin was taken from us too young and will be missed,” said Reap. “May he rest in peace.”

The International sends our deepest sympathies to the family and friends of Brother Guertin.