A major project in Kansas City will not only benefit airline travelers, but has created good paying jobs for members of the Insulators Union.

The project, the largest single infrastructure project in Kansas City history, will take the airport from a three terminal layout to a single terminal. Built in the 1950s following a devastating area-wide flood, the airport footprint has not significantly changed in the last 70 years.

Now, roughly 850 highly skilled and highly trained construction workers are in the midst of building this massive project, which was funded through existing revenue sources. With no tax increase needed, voters overwhelming approved the bond issue to finance the project.

The new structure is being built at the site of the existing Terminal A, which was closed for a number of years due to consolidation and mergers of several U.S. airlines. Terminals B and C are operational during the construction and will be demolished upon transfer of operations to the new integrated terminal. 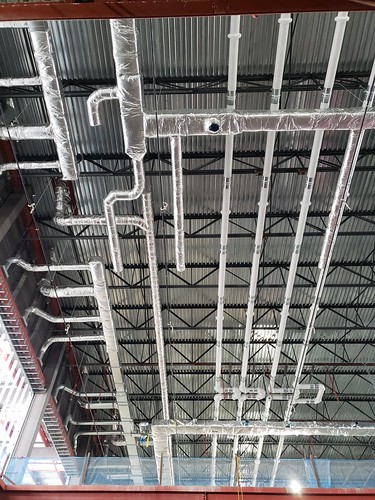 The new 1 million-square-foot terminal will feature 39 gates and can be expanded to accommodate up to 42 gates in the future. It will include two concourses and 18 security lanes, along with dozens of retail and restaurant spaces. A seven-story parking facility will be built adjacent to the new terminal.

In true Kansas City fashion, a two-storied fountain will be constructed in the center of the terminal to project messages and colors on the cascading water. When word of the massive project got out, Insulators Local 27, along with the Kansas City Building Trades, immediately became involved.

“We worked with city leaders helping to inform the public of the benefits,” said Local 27 Business Manager Scott VanBebber. “The largest benefit for the building trades for this project includes working with preapprenticeship programs to aid those seeking construction jobs to ultimately grow the Kansas City workforce.”

According to a blog posted on the project’s website, buildkci.com, the project was on time and on budget, as of mid-July.

“When it is complete, visitors to our city will be welcomed by a much more modern facility that will highlight Kansas City,” VanBebber said. Members of Local 27 working for Pro Insulation started on the project last fall and will be on the job through the spring of 2023.

The Insulators will cover almost 60,000 linear feet of plumbing pipe and more than 68,000 feet of hydronic piping. Our members will use 1,800 rolls of duct wrap, which equates to approximately 538,000 square feet of duct to wrap.