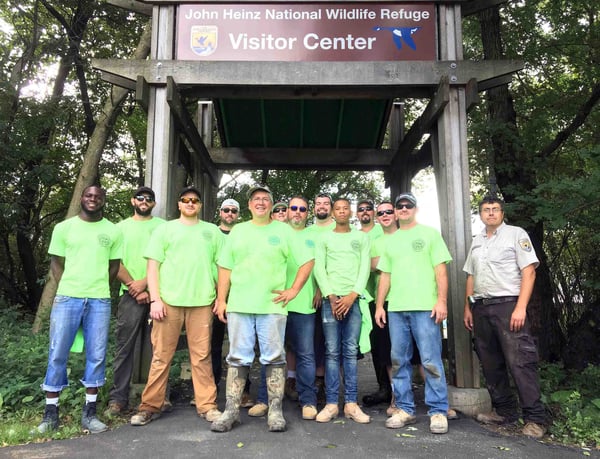 John Heinz NWR welcomes 260,000 visitors annually with a wide variety of interpretive programs and recreational activities including fishing, kayaking, hunting and wildlife watching. It also serves as a living classroom, offering environmental education and outreach programs that touch the lives of 17,000 area youth each season.

Unfortunately, funding and staff shortages left a number of maintenance projects at this urban treasure undone. When USA Conservation Advisory Committee member Connie Parker learned that parts of the refuge infrastructure were in dire need of attention, she connected the USA with Department of the Interior (DOI) Deputy Assistant Secretary for Fish, Wildlife and Parks Aurelia Skipwith.

In turn, Skipwith was instrumental in connecting the USA with U.S. Fish and Wildlife Service staff, who administer the National Wildlife Refuge System, and getting the project started. Organized through the USA’s Work Boots on the Ground (WBG) conservation program, these efforts have completed a series of improvements.

“Our engineers came in to stabilize and resurface the refuge’s wetland loop road while the construction and painting crews worked on the kayak/canoe launch and tower,” said John Stahl, volunteer project leader and apprenticeship training director for Insulators Local 14.

Volunteers scraped and repainted the double-deck observation tower, one of the refuge’s oldest and most-used features, and rebuilt its deteriorating access walkway. They also installed a support foundation for a new floating boat launch and constructed a hinged walkway that allows the platform to rise and fall with tidal fluctuations.

Such improvements were godsends to refuge staff and will enhance the experience of all visitors. “What these volunteers did here really benefits the public by making sure we have safe and equal access for everyone who comes to visit,” said John Heinz Refuge Manager Lamar Gore. “If we didn’t have these skilled volunteers through the Union Sportsmen’s Alliance, we would have to close some things down for longer periods of time. These guys help us keep things moving, which means people can continue to fully appreciate this space.”

“We’re very honored to support the National Wildlife Refuge System’s efforts to protect our precious natural areas for current and future generations of Americans to enjoy,” said USA Director of Conservation and Community Outreach Forrest Parker. “And we are proud of the many union volunteers and their selfless dedication to restoring these features that are so important to the John Heinz National Wildlife Refuge. Their accomplishments truly deserve the recognition the Project of the Year Award brings.”

“Every one of the people who donated their free time to work on this great project deserves credit,” Stahl said during the award presentation at the USA’s recent Fundraising Gala in Washington, D.C. “Because coming together as union brothers and sisters to support our communities is what it’s all about. And I think that’s what the presentation of this award really shows. I’m very proud to be part of a brotherhood that cares enough to give back.”

The DOI has also acknowledged the importance of such public-private partnerships. On September 29, 2018, the USA joined DOI officials at John Heinz NWR to celebrate the first Urban National Wildlife Refuge Day and kickoff of refuge-enhancement projects. A coalition of partners including Pure Fishing, the Association of Fish & Wildlife Agencies Foundation, Ducks Unlimited, the National Wild Turkey Federation and Plano Synergy supported the event.