Gustavo “Gus” Rodriguez, an Apprentice from HFIAW Local 27 Kansas City, was named the winner of the Master Apprentice Competition based on his performance in Toronto, Canada at the end of June.

The week started for 10 competitors on Sunday with a written industry-focused test. The following days, representatives from all of the conferences spent a total of 32 hours in a competition room. The room was sealed off from Local Union Training Coordinators who were floating around the hotel for the JAC conference.

Inside the converted convention room, the competitors were tasked with a challenging project, with little help beyond the printed “project specs.” A mock-up that included a replica Stanley Cup, an oversized hockey goal with net camera, allowed the competition to pay homage to the host city.

The location tie-in along with the challenging mock-up and instructions, were created in 2017, as in year’s past, by competition proctors Lew Fitzgerald and John Sullivan from HFIAW Local 14 Philadelphia.

The mock-ups featured PVC, in both white and red, and rubber, which proved to be a tougher material for some of the competitors.

The competition displayed the high-level of execution and professionalism that the MAC has come to expect, with slight variations that each competitor used to put their own spin on the project.

Judges completed their closed-door evaluation on Thursday, with many judges deliberating and taking a few rounds to completely assess each mock-up.

On Friday night, the competitors and their training coordinators were joined by HFIAW International staff, JAC Conference attendees, guests and families for dinner and the announcement of the 2017 MAC winner. 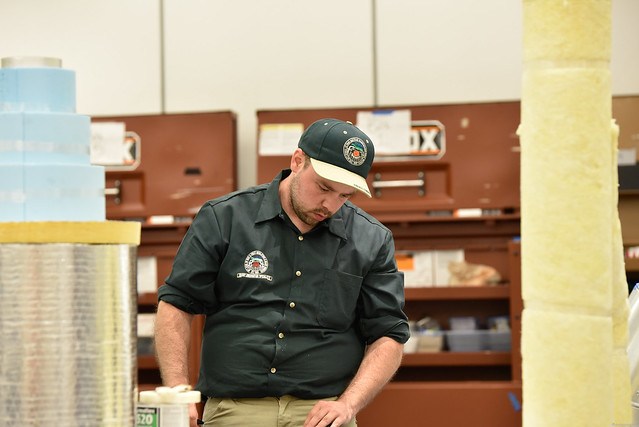 HFIAW General Secretary-Treasurer Greg Revard was on hand, and praised the competitors for their performance during the week.

“The level of competition and the work you guys do, it's tremendous,” he said.

Revard also took a minute to address the Training Directors in the room.

“Every time you train one of these young men and women to come here and compete, you are training the future of the International.”

Tom Haun, Insulation Industry International Apprentice and Training Fund Administrator, welcomed all the contestants to the stage to award them with a certificate, a HFIAW watch and the opportunity for the next four years to attend the Train-the-Trainer courses hosted by the IIIATF.

Then with all eyes focusing on the MAC trophy, Haun announced that Gustavo Rodriguez, representing Local 27 and the Midwest States Conference, won the 2017 Master Apprentice Competition.

Rodriguez was shocked but proudly came forward to accept the trophy. He spoke about the importance he places on family and how he entered the trade following the suggestion of a friend at church.

After his brief speech, followed by several pictures, Rodriguez accepted the MAC trophy and followed tradition by kissing the cup.

When asked how he felt, Rodriguez exclaimed, “It is phenomenal. I am extremely happy.”

His Training Coordinator, Steve Tavis, was on hand to celebrate with his award-winning apprentice. Tavis noted that Rodriguez, “has worked really hard, putting in hours and hours of practice time and striving to be the best he can be.”

The IIIATF would like to thank all the apprentices and their coordinators for the hard work and dedication that was put into making the 2017 Master Apprentice Competition a success: