Today, the Executive Board of the International Association of Heat and Frost Insulators and Allied Workers voted unanimously to endorse Democratic Party presidential nominee Joe Biden for President of the United States.

"In addition to your strong support for fundamental labor standards, and your leadership and vision for an American economy that recognizes the contributions of union construction labor, the Insulators are especially pleased of your support for mechanical insulation tax incentives, building code reforms and energy efficiency investments that will promote our work"

According to McCourt, Biden has the experience necessary to get the nation back on track following four years of Donald Trump.

"Thank you, Vice President Biden, for your dedicated public service to our nation. As Vice President, you worked to clean up the mess in 2009 from the George W. Bush Administration, and the Obama-Biden economic recovery was the longest in U.S. history. Today, America needs you to clean up the mess of the current Administration, and we are looking forward to working with you to help our nation build back better," McCourt added

“…I have committed to launching a national effort to create and support the good, union jobs we need to build a modern, sustainable infrastructure now and deliver an equitable clean energy future. Through this effort, I will support the men and women of the International Association of Heat and Frost Insulators and Allied Workers, who have played a crucial role in providing good-paying union jobs to meet industry needs for over a century,” Biden wrote.

As part of his plan, he believes about 1 million jobs will be created by upgrading 4 million commercial buildings and weatherizing 2 million homes in four years. This would be accomplished by reforming and extending energy efficiency tax incentives.

“…I will work to ensure those incentives support the critical mechanical insulation work you do to reduce the carbon footprint of our buildings. I will also repair the building code process with the goal of establishing building performance standards for existing buildings nationwide – standards that spur energy efficiency, investment in upgrades like insulation, and good-paying jobs for insulators,” he said.

Biden also pledged to defend the right to organize unions and collectively bargain. He vowed to include aspects of the Protecting the Right to Organize (PRO) Act, card check, a broad definition of “employee” and to end the misclassification of workers as independent contractors within his policies.

In addition to worker rights, Biden also addressed worker safety in his letter. 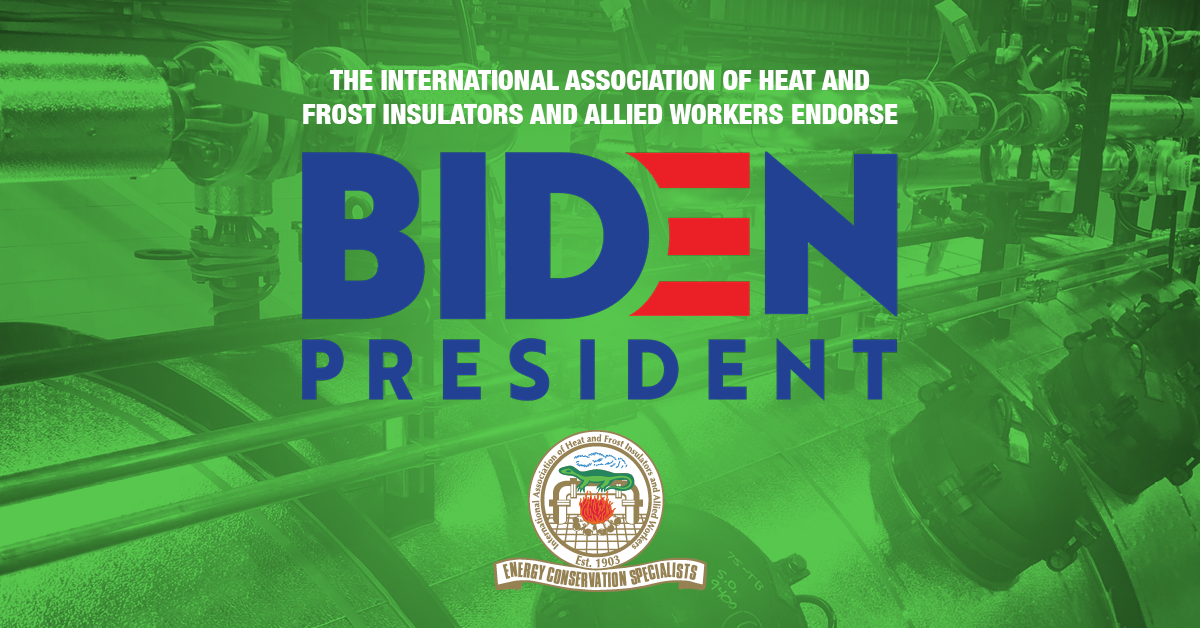 “As President, I will again empower scientists to decide the future of asbestos in the United States,” he wrote.

“No one should get sick just because they went to work, but too many Insulators have gotten sick or died from diseases linked to asbestos exposure,” he added.

Despite thousands of Americans dying each year from asbestos and asbestos-related diseases, the U.S. has not fully banned asbestos.

As Vice President, he supported the Frank R. Lautenberg Chemical Safety for the 21st Century Act, which directed the Environmental Protection Agency to develop a risk evaluation of chemicals with an expedited review of asbestos and gave the EPA the authority to ban asbestos. Unfortunately, during the review process, the Trump administration failed to provide a thorough investigation of asbestos.