Since September, members of various HFIAW Locals have been participating in the nationwide iSave program to sponsor the Saturday Football Game of the Week with Gino Torretta.

Torretta, a former quarterback for the University of Miami, led the Hurricanes to two National Champion titles in 1989 and 1991. He also won the 1992 Heisman Trophy, the Davey O’Brien Award, Johnny Unitas Award, Maxwell Award, Walter Camp Award, Chic Harley Award and was a consensus All-American.

After a successful college career, he was drafted in 1993 and ultimately found some success with the Seattle Seahawks. He now works with Sirius/XM and Touchdown Radio, producing the popular Saturday Football Game of the Week.

The Insulators were proud to collaborate with Torretta for the Game of the Week this season. As part of the partnership, Insulator advertisements featuring Torretta are heard on more than 230 radio stations throughout the U.S., promoting the field of Mechanical Insulation and energy reduction consumption.

The other aspect of the agreement includes a package for the Home Local in the city where the Game of the Week takes place. This included a dinner event, tailgating and game tickets that can be provided to the Local’s Executive Board or members, signatory contractors, contractors considering becoming organized and possibly non-union insulators who are thinking about joining the union.

“Working with the Saturday Football Game of the Week and with Gino Torretta has been very successful from an iSave standpoint” said Alec Rexroat, Director of the HFIAW Labor Management Corporative Trust.

Rexroat said iSave has been instrumental in executing the entire sponsorship package. Robert Hall, HFIAW International Representative, also played a critical role in the implementation and building each Local’s engagement.

The International worked with various Locals throughout the country sponsoring the weekly events, which were pre-selected to correspond to the location of the Saturday Football Game of the Week advertisement package.

The games included in the partnership were: Clemson at Auburn, Virginia Tech at Tennessee (record-setting attendance game), LSU at Auburn, Kentucky at Alabama, Florida State at Miami, Ole Miss at Arkansas, Oklahoma at Texas Tech, Baylor at Texas, Nebraska at Ohio State, Mississippi State at Alabama and Oklahoma State at Texas Christian University.

The HFIAW, iSave and the LMCT were able to work with the Make-A-Wish Foundation to donate a set of tickets for the Mississippi at Alabama game. Make-A-Wish is a non-profit that works to grant wishes to kids with life-threatening medical conditions.

More information about The Gino Torretta Show can be found at www.touchdownradio.com. 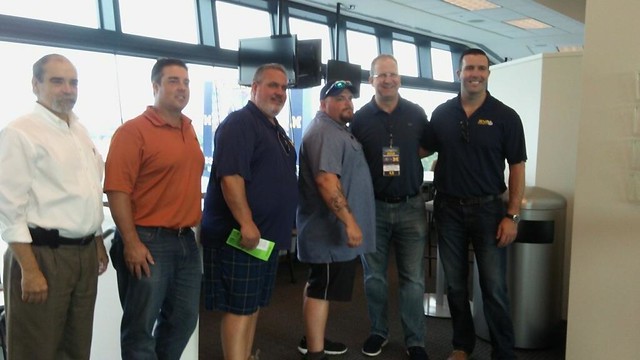