Through education, advocacy, campaigning or at the polls, members of the Insulators Union made a political impact this year in both the U.S. and Canada. In the U.S., the efforts of our Brothers and Sisters to, ‘Get Out the Vote’ helped stem the tide on what was expected to be a “red wave” at the federal level and allow Democrats to keep control of the Senate and only narrowly lose a majority in the House.

At the state level, many friends of the building trades and the Insulators Union were re-elected or elected to office.

In other parts of the country, members of Local 18 met with Indiana Rep. Andre Carson; members of Local 81 worked to promote issues such as the Workers’ Rights Amendment with Illinois State Rep. Michael Halpin. Meanwhile, in Boston, members heard from U.S. Dept. of Labor Secretary Marty Walsh, who extolled the accomplishments of the Biden Administration and the need to vote for candidates who support those issues. 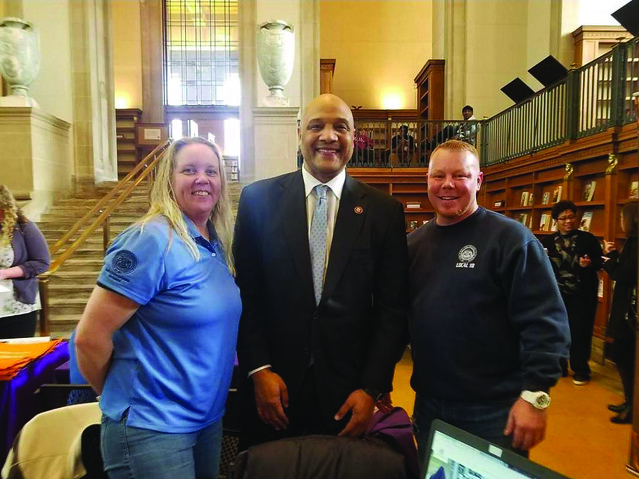 In Canada, our Union members are working with the federal and provincial governments to promote policies that will benefit organized labor, our industries and create jobs for our members.

Various Union leaders have been meeting with Prime Minister Trudeau, MP Jagmeet Singh, members of the Canadian Ministry and provincial elected officials to impact policies beneficial to our Union.

Additionally, our Canadian Brothers and Sisters helped elect or re-elect premiers in several provinces, as well as many mayors and municipal council members. By educating our members on the importance of voting for candidates who support our Union’s causes and issues, we support ourselves, our livelihood and our industry.

At the end of September, Local 48 Business Manager Phil Rainwater attended the For One Georgia Fundraiser in support of Stacey Abrams, the Democratic candidate for Georgia Governor.

While at the fundraiser, Rainwater presented Abrams with a support check from the Insulators International Political Action Committee (PAC) fund.

“Stacey Abrams has always been a supporter of organized labor in the state of Georgia,” Rainwater said. “She is an outspoken candidate who stated numerous times unions build America’s middle class. As Governor, she has pledged to protect the rights of all workers to join a union and will back the use of Project Labor Agreements on state-funded projects.”

Abrams expressed her sincere gratitude for the campaign donation. “I will always be a supporter of the Mechanical Insulators Union and organized labor as a whole,” she said.

While chartered in Atlanta, Local 48 represents much of the state. The Local would have benefited immensely if Abrams was elected Georgia governor.