A letter from General President McCourt to all International Officers and Local Union Business Managers and Training Coordinators:

Insulation Industry International Apprentice and Training Fund (IIIATF) Administrator Thomas A. Haun announced during the 2019 Combined Local Union Officers Meeting/Joint Apprenticeship Conference/Master Apprentice Competition of his retirement slated for December of 2020. Following the announcement, the IIIATF Trustees accepted applications and interviewed all candidates, with the selected replacement to work with Haun for an entire year.

I am pleased to announce on behalf of all the IIIATF Trustees that John L. Stahl, III will serve as the next Insulators Union IIIATF Administrator. Stahl currently serves as the Local 14 Training Coordinator and Vice President in Philadelphia, PA. 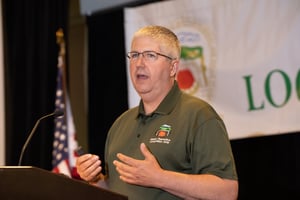 Stahl joined the trade in 1994 and four years later earned Journeyman status. He worked his way up the ladder, starting to instruct and becoming the Local 14 Training Coordinator in 2006. He has served with the IIIATF in a trusted leadership position on the Steering Committee for the last 13 years.

Stahl has earned the title of OSHA Master Instructor, has notably achieved Department of Education Accreditation from the Federal and State government and has had a profound impact on the way Local 14 is able to instruct our workforce’s next generation.

Haun, a second-generation pipe coverer who joined the trade in 1972, has served as the IIIATF Administrator for over 20 years. He has led the advanced developments in curricula, established the industry-renowned Master Apprentice Competition and created several training and educational advancement programs for our union. Haun has earned the respect of everyone in our industry and has been a leader in the construction industry for many years.

We look forward to welcoming Stahl to this position and have full confidence he will become an asset to the entire industry.

This letter was sent on July 17, 2019 from the office of the General President.