The Heat and Frost Insulators and Allied Workers (HFIAW) organized a two-day conference bringing together doctors, researchers and other professions the deal with the impact asbestos has played on multiple generations of mechanical insulators and other construction workers.

The Insulators International Invitational Symposium on Asbestos was held at the Diplomat Resort in Hollywood, Fla. in early March.  The theme promoted the “Unite for the Cure” message.

The program began on March 8, with opening remarks from General President James McCourt. He was followed by General Secretary-Treasurer Greg Revard. Both gave a welcome and brief history of the HFIAW and its interest is combating asbestos and related occupational diseases.

“I am proud to have you all here today. This means a lot to our industry and to the Brothers and Sisters of our union, to the friends and family, and to the researchers, doctors and professionals we have here,” McCourt said. 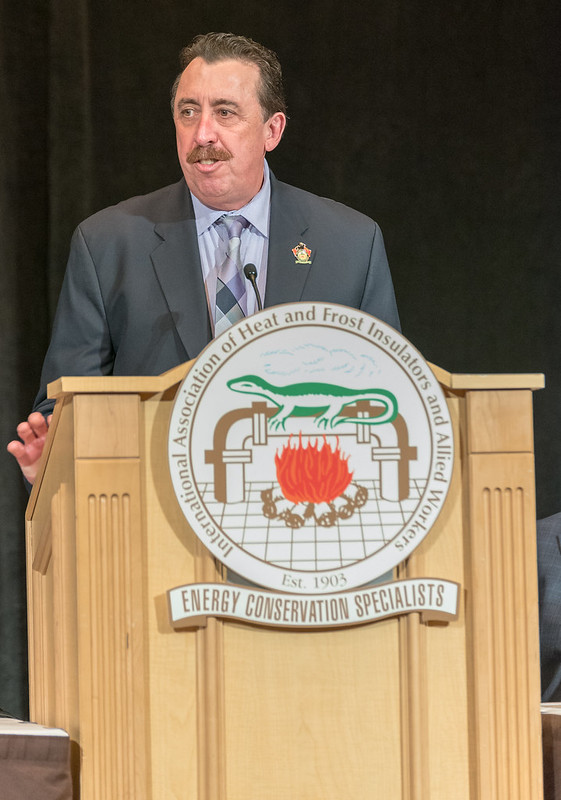 Dr. Michael R. Harbut, MPH; Clinical Professor, Wayne State and the University School of Medicine and Michigan State University College of Human Medicine, addressed the attendees and explained why their physicians, scientists, researchers, legal advisors and political personnel all came together at the event.

The next presentation was a panel discussing, “Asbestos Use, Exposure, Mortality and Morbidity” with Peg Seminario, MS; Director of Safety and Health at the AFL-CIO and Dr. Laurie Welch, Past Medical Director at the Center for Construction Research and Training. Their extensive work with regulations for asbestos was detailed and explained to those in attendance.

Insulators Director of Government Affairs Chip Gardiner then led the discussion on Legislative, Regulatory, Advocacy Efforts to Ban and/or Limit Exposure. Gardiner continued with an overall legislative update on asbestos and mesothelioma advocacy. He was joined on stage by Melinda Kotzian, the CEO of the Mesothelioma Applied Research Foundation (MARF) and Dr. Melissa McDiarmid, MPH, DABT, a Professor of Medicine and Epidemiology and Public Health at the University of Maryland School of Medicine. Kotzian discussed the need for advocacy and the direction that needs to be taken in the future and McDiarmid addressed the University of Maryland’s cancer prevention efforts, which include building a mesothelioma patient registry.

Andy Todd, the Insulators Tissue Bank Principal Investigator spoke to the crowd about his six years working with the Insulators and the objective of the Tissue bank and how it can be an asset to everyone in the room. Todd was joined on the panel by Dr. Waqas Amin, the Senior Research Scientist in the Department of Biomedical Informatics at the University of Pittsburgh. Amin, along with Todd, discussed the National Mesothelioma Virtual Bank.

Dr. Eudice Goldberg, Chair of the Board of Directors at the Canadian Mesothelioma Foundation concluded the first day offering a Canadian perspective. Goldberg has been working with the Insulators Union and specifically the Canadian Conferences for many years. She has often been a speaker at previous Local Union Officers Meetings and continues to offer insights and leadership for the HFIAW.

The second day of the symposium began with an in-depth look at research in Canada. The panel consisted of Dr. John Cho and Dr. Lyle Melenka.

Dr. Harbut addressed clinical considerations in the asbestos-exposed, monitored patient with no known cancer. He also summarized his work with the Insulators Union and the current data he has been finding since the last Health Symposium was held in 2013.

The third panelist was Dr. Raja Flores, Professor and Chairman of the Department of Thoracic Surgery at Mt. Sinai School of Medicine, who spoke on how cures for mesothelioma and asbestos-related cancers are in the works. He also emphasized the lack of an Asbestos ban and encouraged additional political action to get the material banned in the United States.

Discussion with all of the morning panelists included questions related to legislation for banning asbestos. Further discussion touched on the need for additional education and training to look for asbestos-related diseases.

“Early Detection and Screening” was the next panel topic with Dr. Claudia Henschke, Dr. Stella Hines and Dr. Steven Markowitz.

Henschke, a Professor of Radiology and Director at the Early Lung and Cardiac Action Program (ELCAP) Icahn School of Medicine at Mount Sinai spoke on the essential elements of excellent lung cancer screening.

Hines, an Assistant Professor at the University of Maryland School of Medicine, Division of Occupational and Environmental Medicine, presented results from the Insulators Union lung cancer screenings that were conducted in Baltimore three years ago.

Markowitz, a Professor and Director at Barry Commoner Center for Health and the Environment at the City University of New York and a long-time advisor with the Insulators Union, addressed lung cancer screening, who should be and who will be screened.

The last panel addressed “Challenges to and Treatment of Asbestos Cancers” with Dr. Kiran Turaga, an Associate Professor and Vice Chief of General Surgery and Surgical Oncology and Director of Surgical GI Cancer Program, Dr. Hedy Kindler, a Professor at the University of Chicago Medicine and Director of the Mesothelioma Program; and Buerkley Rose, a Research Nurse in the Department of Medicine in the Section of Hematology and Oncology at the University of Chicago Medicine and Biological Sciences.

Turaga discussed surgical management of peritoneal mesothelioma. Kindler reviewed systemic therapy for mesothelioma and standard treatments, while Rose reviewed the ‘Nurse Navigator’ role in the mesothelioma program at the University of Chicago and where his work has been expanded.

General President McCourt and Dr. Harbut concluded the Insulators International Invitational Symposium on Asbestos by thanking everyone who took time to present at the event and other representatives in attendance. Dr. Harbut left the group with strategies and tactical approaches to defeating a death diagnosis.

With important medical advancements and research being conducted continually, across the United States and Canada, the Insulators Union was proud to bring all of the professionals and leadership together for the informational and sharing event, in hopes that everyone can Unite for a Cure.