His career began working as a permit worker, and several years later, the bright-eyed 23-year-old, often known to his Union Brothers and Sisters as “Bud,” became an apprentice with Local 6 in Boston. Now, nearly half a decade later, the second-generation pipe-coverer has retired from the highest office of the Insulators Union.

His father, James F. McCourt, imparted McCourt’s passion for the union and for the insulation industry. The lessons his father taught him about the industry and life would go on to serve him well.

In 1980, McCourt earned his mechanic’s card and two years later began his service to the union when he joined the Local 6 Executive Board.

He was a natural leader, and his Brothers and Sisters voted him Local Union President, a position he held from 1985 to 1987. He also served as an Asbestos Abatement Coordinator and Business Agent for his Local prior to being elected Business Manager and Financial and Corresponding Secretary in July 1995.

His time as a business agent and then business manager caught the attention of those at the International level, who recognized he was an asset to the entire union.

In 1987, McCourt became a Convention Delegate for the first time. He would go on to represent his Local at the 1992 and 1997 conventions.

During the 1997 Convention, his hard work and dedication paid off, as he was elected to the position of New York-New England States Conference International Vice President. As an international officer, he led with dedication and distinction, traits he held through his initial 23-years of service.

McCourt was officially union-elected to the General Secretary-Treasurer position at the 2002 Convention and re-elected at the 2007 and 2012 Conventions.

During the 14 years of Grogan’s leadership, McCourt watched and learned, as Grogan led the union through some difficult times and created new initiatives and the funds to support them.

When Grogan retired in 2015, the General Executive Board elected McCourt General President. As the new leader of the Insulators Union, his direction and vision was simple: Be Better.

McCourt put a large emphasis bettering the union through organizing efforts – adding members and increasing market share. He understood the International was only as strong as the membership and recognized the need to increase the size of union.

Through organizing, the union could weaken their non-union competition and strengthen their share of the market.

“He was faced with many difficult challenges, and though often not easy, he made the tough decisions,” New York/New England States Conference International Vice President Robert W. Reap said. “Our organization is in a better place today having had him as our leader.”

While McCourt was forced to make difficult decisions, he was always concerned about transparency, making sure everyone understood the issues and most importantly, treating people the right way.

“It is a rare gift to have a leader who is both fair and honest and treats everyone with respect and dignity and always finds the time to listen to concerns,” said Western Canadian Conference International Vice President Wade Logan.

When delegates gathered in 2017 for the 31st Quinquennial Convention held in McCourt’s home state of Massachusetts, his vision, dedication and drive was put on display and eagerly supported as he was elected to retain the General President role for the Insulators Union.

Three years later, McCourt felt the time was right to retire. In a letter announcing his retirement, McCourt wrote about his drive to make the union better.

Those who worked directly with him saw his passion and fire to make the Insulators union better.

“I sincerely thank General President McCourt for his many years of leadership and dedication to our great International Union,” said Donald Stanley, Southeast States Conference International Vice President. “It has been an honor to work with someone whose goal was to constantly make this industry better for all members.”

As McCourt begins a new phase in his life, his legacy was cemented by not only the growth of the union, but by the example he set and the friendships he made during his 45 years of service.

“I can’t thank General President Emeritus enough for his great leadership, honesty and integrity,” said newly elected General President Gregory T. Revard. “It has been a pleasure to serve as his General Secretary-Treasurer and to learn from someone who became such a trusted friend.”

McCourt will be spending his new free time with his wife Deborah, and their newfound interest in golf. He is also looking forward to quality time with his son James (Jamie), his wife Kim and their children James A. and Josephine, and his son Jonathan and his wife Caitlyn.

On behalf of the Insulators Union, staff, friends and families, we extend our deepest appreciation for your service and leadership to our union. May your retirement be filled with good health, wonderful memories and happiness with your family. 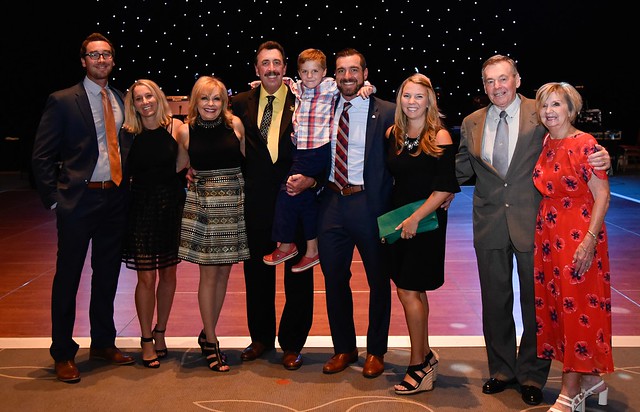