The Canada’s Building Trades Unions (CBTU) held its annual legislative conference in Ottawa from April 25-28, following two years of virtual events due to the COVID-19 pandemic.

The conference used the theme, “Stronger Now,” and featured the CBTU’s Annual Distinction Awards and plenary speeches from government, labor, industry and business leaders who discussed the changing economy, major projects, recovering from COVID-19 and new and emerging technologies. 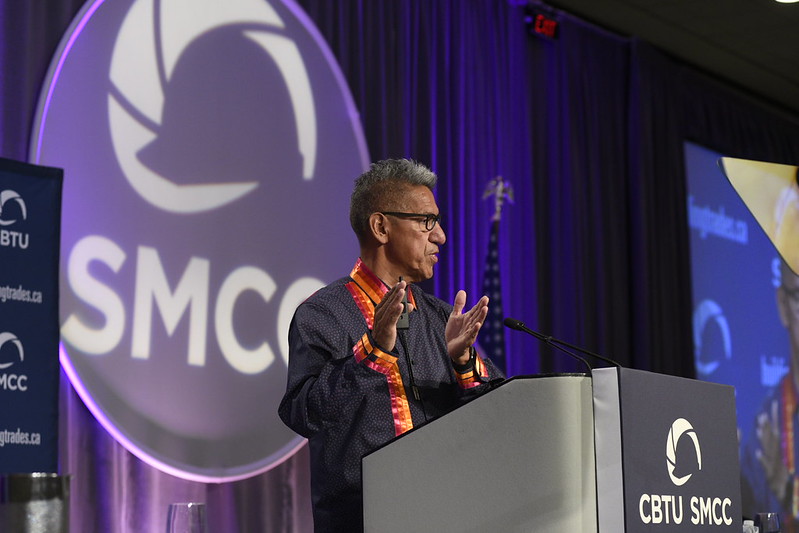 The conference kicked off on Monday evening with the Distinction Awards, a celebration of leaders who have made significant contributions to the construction industry.

Besides the awards, there were several speakers that night, as well.

CBTU Executive Board Chairman Robert Kucheran and CBTU Executive Director Sean Strickland addressed the crowd and reflected on the challenges building trades members have faced over the past few years.

Member of Parliament Greg Fergus then addressed the delegates and touched on the doubling of the Union Training and Innovation Program, which supports apprenticeship training, innovation and partnerships in the Red Seal trades across Canada.

This program has played a role in the development of the workforce of tomorrow and upskilling workers. Since its launch in 2017, the Canadian government has funded 217 projects for an investment of $127.4 million. MP Francesco Sorbara also talked Monday night. He said the skilled trades are at the heart of the government’s plan to build a strong economy and critical infrastructure. April 26 marked the first full day of the conference.

MP and Parliamentary Secretary to the Minister of Employment, Workforce Development and Disability Inclusion Irek Kusmierczyk highlighted the government’s strong relationship with labor and skilled workers. The skilled trades are the heartbeat of the economy and community and the key to transformational projects such as the Gordie Howe Bridge and a $5 billion battery plant, he said.

MP Daniel Blaikie, an IBEW electrician, spoke on his experience as a tradesman and how it has influenced his time in parliament. MP Jagmeet Singh also addressed the delegates.

Three-time best-selling author, General Partner of District Ventures Capital and TV personality Arlene Dickinson was the keynote speaker. She provided insights into marketing and communications, which were well received by the crowd.

On April 27, CBTU Government Relations Specialist Rita Rahmati provided an update on the CBTU’s advocacy work and other issues.

U.S. Ambassador to Canada David L. Cohen addressed the delegates and spoke on the importance of the changing economy and developing a diverse, skilled workforce. He said construction workers will be at the forefront of Canada’s sustainable and inclusive economic recovery – literally, by physically building the country back better. Union labor is smart for business and the public on both sides of the border, he added.

Minister of Labour Seamus O’Regan was the day’s featured speaker and he talked about the creation of a Labour Mobility Deduction for members of the building trades.

“We are creating a tax deduction that will be available this year to help you with the cost of travel and relocating for work,” O’Regan said. “We need more of you, and we need to make it more affordable for you to go to where the jobs are. It’s pretty simple. We’re doing it because of the advocacy of this room, the advocacy of the CBTU and because of your membership.

“Starting this year, tradesmen and tradeswomen will be able to deduct up to $4,000 per year for travel expenses,” he said.

Recruiting and retaining a diverse, skilled trades workforce is necessary to meet labor demand across Canada, and CBTU Director of Workforce Development Lindsay Amundsen talked about the Building It Green program and other initiatives aimed at increasing workforce diversity.

Daniels, who was recognized as a Diversity and Inclusion Champion two nights earlier, gave insights on how to make the trades stronger and more inclusive to ensure young people can embark on a rewarding career in the trades.

MP Chris Lewis also addressed the conference. Vice President of Communications at Moltex Energy, Erin Polka, and President and CEO of ARC Clean Energy, Bill Labbe, held a round table discussion and shared their expertise on where small modular reactor development stands, as well as the impact it will have on skilled trades jobs and job opportunities.

Before adjourning to a Parliamentary reception retired Business Manager/Secretary-Treasurer of the Provincial Building and Construction Trades Council of Ontario, Patrick Dillon, was presented the CBTU Distinction Award for Outstanding Contribution to the Labour Movement.

April 28 is the Day of Mourning, and was commemorated with a national ceremony at the Canada’s
Building Trades Workers Monument.