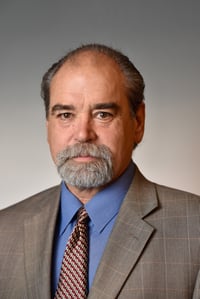 He began his career in 1975 with Local 39 in Omaha as a permit worker. Several years later, he joined the apprenticeship and earned his Mechanics card. As a mechanic, he traveled, working at various power plants and chemical plants. He spent 10 years running work for large, industrial projects.

Hall spent many years with the tools, until he was elected Local 39 Vice President and Organizer. He also served Local 39 as the elected Business Manager from October 1996 until 2007. During his tenure as Business Manager, he saw the funding and building of Local 39’s Union Hall.

Beyond leading Local 39, Hall served as a Trustee for the Omaha and Southwest Iowa Building and Construction Trades Council and as the Chairman of the Industrial Committee. Hall’s involvement on the committee garnered him the ability to work with contractors on large job sites.

For several Nebraska projects, Hall was able to make plants “yellow card sites,” ensuring all workers were union and insisting on tripartite meetings with the unions, contractors and owners. These meetings guaranteed the projects were successful and helped foster political connections and helped him to become politically active.

In 2008, then General President James Grogan appointed Hall as an International Representative. Over the last 12 years, Hall served the Insulators Union in many capacities. Throughout the United States and Canada, he worked on projects with various International vice presidents on initiatives to sell and secure work for firestopping as a specialty trade, as well as helping to settle large jobsite disputes and assistance with organizing drives.

In addition to his various assignments during his tenure as International Representative, Hall also supported the mission of the Insulators Labor Management Cooperative Trust (LMCT), working closely with the late Director Alec Rexroat and current Director Pete Ielmini.

Upon retirement, Hall hopes to spend time with family and work on his passion – cars and hot rods.

We wish him and Shelli, his wife of 41 years, along with his daughter Amanda and son Rob, grandchildren Baxter and Pippa, a long, happy and well-deserved retirement.