Lee Loftus is a retired Local 118 Business Manager and a proud third-generation Insulator. A member of the HFIAW since 1976, Loftus worked his way up, eventually holding elected positions both with the Local and with the building trades on a city and province level. He was previously the British Columbia Federation of Labour Occupation Health, Safety and Environment Director and has been entrenched in occupational health and environmental issues his entire professional career.

When I was a young boy, I could not wait for my dad to get home from work at the end of the day.

The minute he walked in the door, we kids would ignore his dusty clothes and hair and run to give him a big hug. He would then put his work clothes in the family laundry hamper and climb into the shower. It was not until some years later we realized the dust on his clothes was mostly asbestos.

By the middle of the 1900s, the construction industry had realized that if you needed more strengthening, more water-resisting, more heat-resisting, more sound-resisting or more fire-resisting, then adding asbestos to your product was the answer.

Asbestos soon made its way into insulation for pipes, boilers, industrial machinery, fireproofing, sprayed insulation for houses and commercial buildings, and eventually building materials including roofing, drywall, floor tiles, concrete or any other product where it could be useful.

I am a third-generation Insulator. My grandfather Ted Loftus was a bricklayer and asbestos worker from the 1930s to the 1960s and helped charter Local 118 in 1954. My father followed in his footsteps and joined the union in the 1960s when he returned from service in the Air Force after the war. He became active in union issues including the perils of asbestos use in the industry.

During his time in the union, Dr. Irving J. Selikoff began researching asbestos exposure and released his first results circa 1970.

As a young member, I was asked to help coordinate his research on behalf of the union because his work touched directly on the lives of our members. His research clearly established a link between asbestos exposure and asbestosis (a silicosis-like condition) and death. As a young kid seized with this issue, I was faced with the challenge of telling the world they needed to do more.

Occupational physicians were under-reporting, the compensation system was denying claims, workplace regulations were not enforced and family doctors did not ask about work exposures because they felt mesothelioma was so rare that it did not need any attention. Manufacturers and suppliers cleared out their stocks or asbestos products before they could be banned. They were feverishly installing asbestos products everywhere they could.

My father worked on a project in downtown Vancouver where asbestos was being sprayed everywhere, with no controls. It was all over the workplace in stairwells, elevator shafts, lunchrooms and tool lockups. The overspray was falling on cars, buses, sidewalks and onto pedestrians walking below.

The workers pulled a one-day, wildcat strike on the asbestos issue, which resulted in changes to some of the practices. Barriers were put in place to control overspray and the public walking near buildings was now protected. Overall, progress was slow and uneven.

As a green eager-to-please apprentice at a gas plant in northern British Columbia, on my first day on the job I worked to remove insulation from pipes and vessels. The general foreman insisted the asbestos-based blue mud finishing cement be kept for future use because it was getting hard to come by.

I was energetic, young and determined to not embarrass my father and grandfather. I stripped all that mud off the pipes and vessels and stuffed it into 45-gallon drums. When it came time to reinstall the finishing cement, it was my job to dump it into a mixing trough, add some water and hoe it into a nice consistency for the Insulators to re-apply.

That was in the early 1970s and the use of asbestos was at its peak. I was aware enough to ask for a respirator when I was working with asbestos, but there were none.

The older workers scoffed at me. Been working with it for years, they said. There were no coveralls, no respiratory protection, no containment, no clean-up protocols and no recognition that asbestos fibers were dangerous killers.

Today we know breathing asbestos leads to asbestosis or mesothelioma, an incurable form of lung cancer. When tiny asbestos fibers become airborne, they attach deep into the lungs. The fibers kill cells in the lung lining and the scar tissue grows and grows. After many years, the scar tissue overwhelms the lungs, and the lungs simply stop working. There is no cure for either disease or very little in the way of treatment.

As early as 1947, the mining and manufacturing industries continued to promote the use of asbestos, even after their own occupational physicians and hygienists had good evidence there were serious health effects. It was known to create conditions like black lung and silicosis, which coal miners contracted due to their exposure to coal dust and silica fibers.

In British Columbia, the province where I live, the Workers Compensation Board woke up to the realities of asbestos in 1978 and issued a report which put serious rakes on the worst abuses of safety regarding the handling of the deadly mineral. Since 1978, regulations stiffened to protect workers in Canada. Abatement contractors in the field of asbestos removal and building renovation and teardowns must be specially licensed. Workers must be protected against harm from asbestos and must receive special training and certification to work in the field.

The USA banned the mining of asbestos in 2002 but allows its importation and use.

Canada outlawed the importation and use of asbestos in 2018, a few years after the Insulators Union invited Prime Minister Justin Trudeau to a Canadian Building Trades Union Convention.

Consequently, Canada’s asbestos mining industry shriveled and died. Though asbestos is no longer being applied, it was widely installed in commercial, industrial and residential buildings. It poses a serious hazard for workers who disturb it in the course of their work, and community members are equally vulnerable when they accidentally disturb it.

Last year alone, asbestos claimed the lives of 53 workers in British Columbia. Since 2000, asbestos has been responsible for one-third of all Canadian work-related deaths. In the U.S., it takes the lives of 39,000 workers each year. It is the single biggest workplace killer, striking people down decades after their exposure.

Canada had two main centres for asbestos mining – Cassiar in Northern British Columbia and the towns of Thetford Mines and Asbestos in Southern Quebec, which were home to the largest asbestos mines in the world.

The town of Asbestos recently changed its name to Val-des-Sources. There were also many asbestos mines in the U.S., mainly in Georgia and the Pacific Northwest. Even with asbestos mining banned in Canada and the U.S., other countries such as Russia, China and Brazil continue to heavily mine the deadly substance.

The reality is, because of ignorance of the facts and employers avoiding their responsibility to protect the safety of their workers, we had decades of unnecessary deaths, which will continue for years to come.

Former Local 118 Business Manager and then Canadian Conference (Western) International Vice President Anthony Ceraldi was one of the leaders of the fight to recognize the dangers of asbestos to workers and others.

For many years his warnings were ignored by those whose responsibility it was to prevent the loss of life and keep our workplaces safe. When I followed him as the elected Local 118 Business Manager, he asked me to take up the challenge and I did. I spent many days traveling to speak to interested groups, government ministers, officials and to other unions because the battle is not over.

When I first became a construction worker, I never imagined I would find myself helping members to arrange their deaths. As safety director for my union, one of my jobs was filing Workers’ Compensation claims. The cuts, bruises and broken arms were easy to manage. It was those calls asking, “what’s next?” after an asbestos diagnosis that troubled me.

Ceraldi had experience dealing with these issues and coached me through the details of insurance. He also helped me develop the compassion and empathy needed if I was to give advice on dying.

I remember my first such call. It was my mentor from my first job up north. He had taken out his pension a month prior to his diagnosis of lung cancer. They said it was due to asbestos exposure. He had a month to live. He wanted to change his pension selection from “Life Only” to a guaranteed pension. He wanted to make sure his wife had an income when he was gone, and he wanted to know if his life insurance was still good. I had to tell him no for both issues. I did not sleep well that week.

I have given too many eulogies, helped procure too many tanks of oxygen for members, worked on countless Worker Compensation Benefits claims, held scores of grieving wives’ hands and looked into the faces of too many children who lost their dads to asbestos. I have been blamed and yelled at, accused of doing nothing and the last person a friend and co-worker ever saw.

Asbestos is an ever-present threat to the lives of insulators, carpenters, plumbers, electricians, labourers and many other workers whose job it is to work on existing installations that may be covered with asbestos-laced construction materials.

We will continue to lose people unnecessarily until everyone recognizes and acknowledges the dangers we face and take the right steps to keep workers and innocent civilians safe and alive.

Due to my activities in preaching care, safety and concrete actions to stem the tide of deaths due to asbestos, I am often asked about my personal health.

I think about the time I was working in a large shop on the Vancouver waterfront with the sunlight streaming through the huge windows. As you looked through the shop, you could see the dust shimmering in the sunlight. I knew we were working with asbestos there, and hundreds of those shop workers were breathing it in every day of the week, including me.

I keep close tabs on my health and yes, I have some lung damage. I recently retired from the trade, and at age 66 I am enjoying life. However, I know how this disease works. It very likely will take my life one day, but we all must make the best of every day we have. 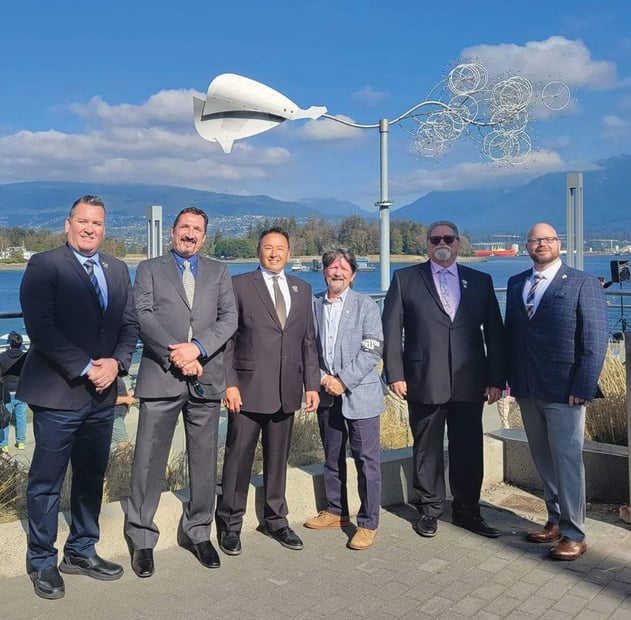 One of my most joyful days occurred this past September when I was present at the dedication of an extremely creative memorial dedicated to the thousands of workers in British Columbia, Canada and North America who lost their lives to mesothelioma. 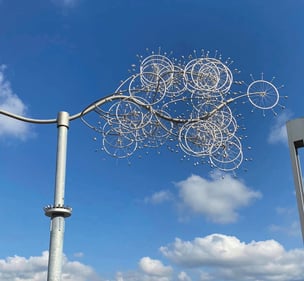 The cups on the wheels that catch the wind evoke the air in the lungs, which brings in the deadly asbestos fibers. It flashes in the sunlight above the main civic plaza of our city, as a testament to the lives lost and future lives saved by union activists and others in our International Union, the British Columbia Building Trades and Local 118, who led the fight to reveal the sinister harms of asbestos.

This is the only known memorial to the thousands of North American workers and community members who lost their lives to asbestos.

It challenges all of us to never forget the many workers whose lives were taken by asbestos, and the need to remember, so their deaths were not in vain.

Passers-by are captivated by the uniqueness of the memorial and pause to read the plaque at its base telling the awful story of asbestos, which was penned by a local poet.

The entire project was commissioned by the British Columbia Labour Heritage Centre, an organization that preserves, documents and presents the rich history of working people in British Columbia.