In April, the North America’s Building Trades Union (NABTU) Legislative Conference was held in-person in Washington, D.C. after a two-year break due to COVID-19.

Building trades delegates, including HFIAW members, from across the nation gathered to hear from various national leaders, but with only limited opportunities to visit and network with their elected representatives in Congress, again due to COVID limitations.

The theme of this year’s conference was Our Movement, Our Moment, which focused on the great strides members of the building trades unions are making with the support of President Joe Biden and his administration. 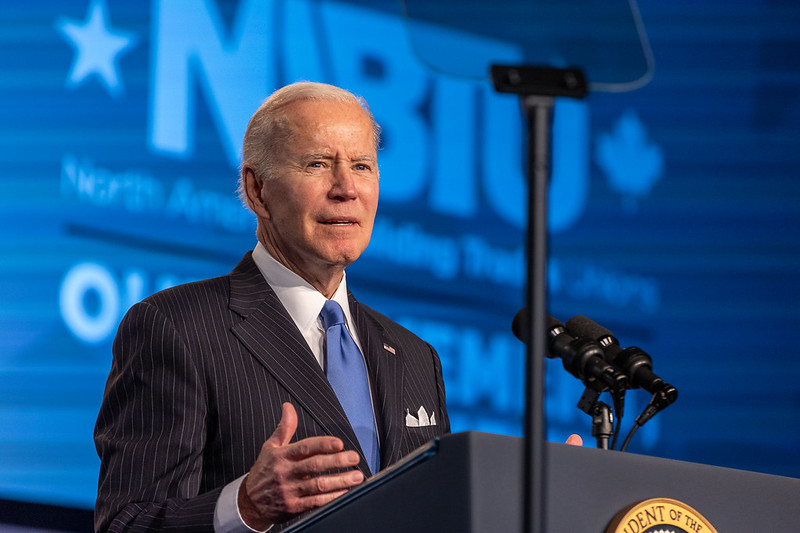 The legislative conference featured a strong lineup of pro-union and pro-buiding trades speakers highlighted by Biden himself.

Each speaker touched upon the importance of the building trades, and how they are critical to the success of creating a thriving middle class and economy.

The day before the conference, April 4, was again set aside to allow attendees the opportunity to perform community service.

Delegates had the option to remove debris and refurbish a gazebo and sidewalks at the Armed Forces Retirement Home, pick up recycling and trash at the National Park Service Cherry Blossom Festival or help Heritage Island Parks by refurbishing and building trails, installing benches, cleaning up debris and cutting back overgrowth.

April 5 was the first day of the conference and it started with NABTU Secretary-Treasurer Brent Booker welcoming a packed conference room of delegates, union leaders and labor allies. After the presentation of colors, the National Anthem and a musical performance by the U.S. Marine Band, the Rev. Crete Kiley fired up the crowd with an invocation full of inspiration for our labor unions.

Following a moment of silence and the opening video, NABTU President Sean McGarvey addressed the delegates. He discussed how the members of the building trades were the definition of essential works during the pandemic, and how they never stopped working and never gave up throughout the pandemic.

He also highlighted how our Union Brothers and Sisters selflessly gave up their time, money and sometimes even their Union Halls to support the frontline healthcare workers fighting the pandemic.

McGarvey then highlighted the many accomplishments of the Biden/Harris administration such as multi-employer pension reform, promotion of Project Labor Agreements and Davis-Bacon.

“We knew Joe Biden would be the true president of the working people, and he is,” McGarvey said. “Their actions have matched their words in everything from jobless benefits during the coronavirus-caused depression to the childcare tax credit to the pension relief.” 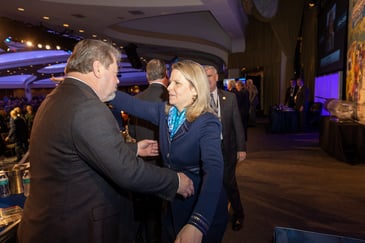 Also speaking on the first day was IBEW member and AFL-CIO President Liz Schuler, who told the room how much of an honor it was to speak to a room full of building trades members.

She noted how previous presidents talked about rebuilding America, but President Biden got it done. Schuler also emphasized the importance of recruiting women, minorities and the formerly incarcerated into lifelong careers with the building trades.

“No one is better at training people than we are; let’s make our unions look like the communities where the jobs are being created,” she said. “This movement needs to keep adapting and changing with our members.”

Other speakers on the first day included Murkowski, Raimondo, Pelosi and D’Amaro. Following lunch, there were two workshop sessions.

Day 2 began with a speech by Ryan, who was followed to the podium by Schumer, who told the delegates their unions helped create the middle class and made this country what it is today.

“You built America, none of us should ever forget that,” he said, and then went on to address the passage of the Butch Lewis Act.

“We have pension reform, the pensions were saved, and not one penny was cut from anybody’s benefits,” he added.

U.S. Secretary of Labor Marty Walsh also spoke at the conference and told the delegates that more workers achieve the American Dream through union labor. He touched on the Butch Lewis Act and President Biden’s Executive Order expanding the use of PLAs on federal projects.

Fitzpatrick, Abrams, Jeffries, Bacon, Buttigieg and Lamb all spoke before the day concluded with the remarks from President Biden.

After he briefly addressed the Russian atrocities in Ukraine, and the response by the U.S. and its allies, Biden focused on labor-related issues.

He thanked all in attendance, acknowledged the fact he would not be president without the support of Union Labor and discussed the importance of the growing the middle class.

“We are going to build this economy not from the top-down, but from the middle up and out,” said Biden. “That’s how you build America … the reason that there is a middle class is because of Unions.”

Biden went on to highlight the accomplishments of his administration, including the passage of the Infrastructure Investment and Jobs Act, and how the economy rebounded once he took office.

Throughout his speech, the president was interrupted repeatedly by cheers and rounds of applause, especially when he announced a mass transit grant and when he mentioned all the pro-worker, pro-union achievements that are on the horizon.

Biden also touched on the fact work still needs to be done to make childcare affordable so working women, including those working in the building trades, can be successful in today’s labor landscape