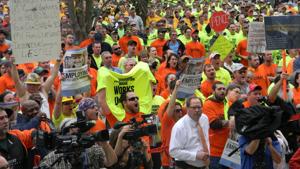 Thousands rallied outside the Indiana Statehouse Monday to protest legislation that would roll back the state's common construction wage law, which sets union-level pay for workers on public projects, including schools. The Republican-backed legislation has support from Gov. Mike Pence but has met with fierce opposition from union contractors and the building trades.

INDIANAPOLIS — Frank Marshall calls himself a lifelong Republican, but on Monday he stood on the steps of the Statehouse and denounced GOP leaders for their efforts to kill Indiana’s 80-year-old common construction wage.

Marshall, a second-generation contractor from Valparaiso, told about 8,000 protesters that he regretted donations to Republicans who want end the system that sets wages for workers on public projects.

“I’m going to tell you, I’m sorry I did that,” said Marshall, setting off a roar of approval from construction workers who traveled from all over the state to protest the proposal that has strong backing of Gov. Mike Pence.

“I feel a strong of sense of betrayal,” Marshall said after leaving the podium to make way for a long line of speakers. “I just don’t think there is anything wrong with a man or woman earning a fair wage.”

It was a theme repeated throughout the two-hour rally, which was organized by the Indiana Building Contractors Alliance.

Repeal supporters claim that ending the law, which sets union-level wages on public construction projects such as schools, saves taxpayers money by permitting the free market to determine worker pay.

The Building Contractors Alliance, made up of 4,000 contractors, cites the prevailing wage’s origins as a 1930s-era protective measure to keep out-of-state contractors with unskilled workers from undercutting local companies on government jobs. The wage covers more than $1.5 billion in public construction projects a year and 75,000 workers.

Strong opposition has also come from the state’s building trade unions, which have partnered with contractors to create apprenticeship training programs that lead to high-skilled, good-paying jobs.

The legislation to repeal the wage law sprung forth unexpectedly earlier in the session, coming on the heels a court decision upholding the state’s contentious right-to-work law, which has weakened labor union membership