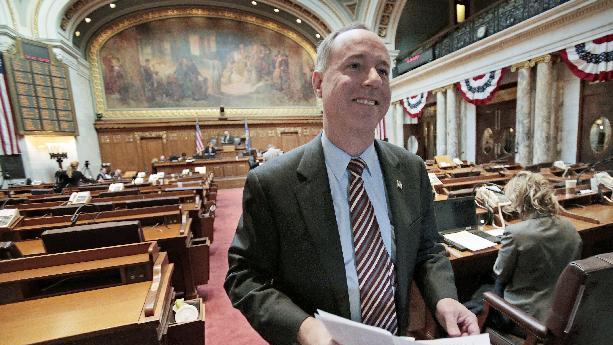 MADISON, Wis. (AP) — Wisconsin Gov. Scott Walker, a likely presidential candidate who built his reputation on limiting the power of public-sector unions four years ago, plans to quickly sign a right-to-work bill after the Assembly passed it Friday at the end of an all-night session.

The state's union workers, resigned to the inevitability of Walker signing the bill on Monday, said they would increase efforts to educate members about the importance of their financial dues and encourage them to turn out to the polls. And while some unions have banded together, reinvigorated by a sense of betrayal by Republican lawmakers, they recognize that it might take decades to completely recover from the blows.

"You've got to fight back, but this kind of thing is going to be a generational process," Jerry Papa, a 62-year-old bus driver from Milwaukee, said during a rally against right-to-work on Thursday. "It's going to take 25 to 40 years to correct problems Scott Walker's done in 4 ½ years."

Making Wisconsin a right-to-work state was a longtime priority for Walker but not something he actively pushed as governor. Under the law, private-sector workers can't be forced to pay union dues, even while they may derive benefits from being represented by the union.

The measure is more limited than the law Walker pushed four years ago that effectively killed collective bargaining for all public workers except police and firefighters. And the protests that came with it were much smaller. Only a handful of protesters were on hand when the Assembly voted 62-35 along party lines to pass it Friday.

Patrick Landgraf, a union sheet metal worker from Sheboygan, 55 miles north of Milwaukee, said protests at the Capitol leading up to the vote Friday lacked the backing of those four years prior because workers were resigned to the measure passing the Republican-controlled Legislature. 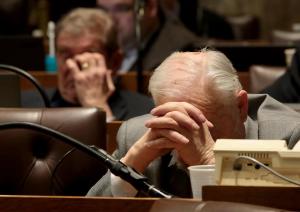 Landgraf said his union would model its efforts after unions in Indiana and Michigan that implemented education campaigns when those states moved to enact right-to-work laws in 2012.

"They all see the value in the union," Landgraf said of workers in those nearby states. "We'll take the same approach. There may still be a few we can't convince, but we'll still try to tell them about the benefits they'll enjoy, even if they don't pay."

Republican Assembly Speaker Robin Vos argued during debate that the measure would actually make unions stronger because they would now have to work harder for their members in order to get them to pay dues.

Milwaukee construction worker Daren Olson said a feeling of betrayal among workers who voted for Republicans would re-ignite solidarity. Workers came out in droves to union meetings in his community when talk of right-to-work started weeks ago, he said, and that is likely to continue. 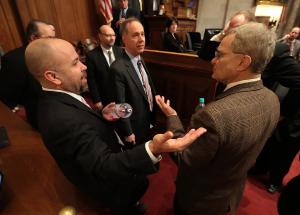 "Any time we've been attacked it's galvanized us," Olson said.

Labor expert Paul Secunda said legal efforts to overturn the decision would likely be unsuccessful. No one has ever mounted a successful legal challenge to right-to-work laws, Secunda said.

Wisconsin Republicans said they modeled the bill after Michigan and Indiana's laws, both of which have withstood lawsuits.