For the first time in the 116-year history of the union, the Insulators held the Local Union Officers Meeting, the Joint Apprenticeship Conference and the Master Apprentice Competition (MAC) at the same time and same location.

All three events took place in Phoenix from May 20 to May 23, as more than 300 Local Union Officers, Training Coordinators, Instructors and International Officers were in attendance.

General President McCourt opened the conference by welcoming everyone and introducing the General Executive Board and International staff. He then discussed the reasons for merging the conferences together, stressed the value each conference can offer to the other and announced the location of the 2020 combined conferences.

A primary motivation to bring the events together was so more union leaders could see first-hand, the amazing work on display during the Master Apprentice Competition McCourt added.

The conferences remained combined for the rest of the first day, as numerous speakers addressed topics of importance to all the attendees. North America’s Building Trades Unions’ Helmets to Hardhats Director Darrell Roberts spoke on the benefits of recruitment through the Helmets to Hardhats program.

Later in the day, a Helmets to Hardhat video was played, which focused on the recruitment of veterans into the trade. A Count Me In video about the efforts in New York, and another related to engagement in union-based activities was also played on the first day.

Allied Trades Assistance Program Director Ken Serviss presented on the opioid epidemic, specifically discussing the need to better serve Union members who are trying to recover from this potentially deadly addiction. The opioid talk was immediately followed by Local 6 Training Coordinator Rick Rothwell and Local 110 Training Coordinator Dan Arnett, who spoke about the legalization of medical marijuana in many jurisdictions can change. 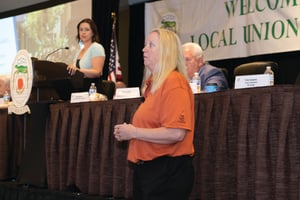 Director of Union Relations for the Union Sportsmen’s Alliance Walt Ingram then took to the stage and awarded Local 14 Training Coordinator John Stahl the USA Sportsmen of the Year Award.

After accepting the award, Stahl remained on stage and presented on the Council of Occupational Education Accreditation process and how his Local’s apprenticeship and training program received accreditation and federal funding for training.

Following Stahl was Local 1 Training Coordinator Terry Walsh and McGuckin, who discussed and demonstrated the Insulator Pro Certificate Program, which is used to keep documented training information readily available online for all members.

This was followed by a spirited presentation by IIIATF Administrator Assistant Christina Bouchard and Local 18 President Kim Patrick who talked about the 2019 NABTU Women Build Nations Conference. 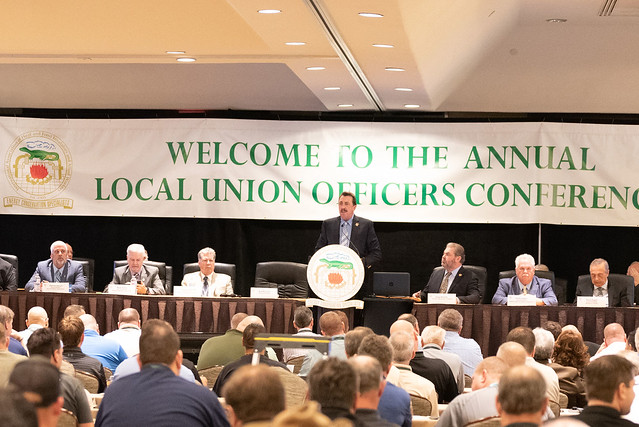 Walsh made the final presentation of the day and showed attendees how to use the new Time Card Manager system to help maintain proper documentation of the hours worked and type of work performed. This system will help apprentices document their experience and also help mechanics keep track of the work needed for journeyman upgrading.

On May 21, a fundraiser was held for the Insulators’ Tissue Bank and Asbestos Research Fund. Details on the fundraiser can be found in the Community section in this edition of The Journal.

While the first day featured a combined conference, training and Local Officers held separate meetings on Day 2. The Local Union Officers spent a significant time during the morning listening to presenters from the medical community, who shared information and highlighted a new study that will be funded by the Insulators Tissue Bank and Asbestos Research Fund.

Further details regarding this study can be found in the Health and Welfare section in this edition of The Journal. The following medical professionals and focused occupational health-related researchers and doctors presented on various topics:

In the afternoon, General President McCourt discussed the recent agreement with the Sheet Metal Workers Union and the impact it will have on the work done by Insulators in certain jurisdictions.

To learn more about the agreement, members should attend their Local union meetings. Brother John Sheraud, from Local 131 Saint John, New Brunswick, gave the last presentation of the day and spoke about the success he has had turning energy audits into new work for his Local. He shared techniques and encouraged other Locals to consider following his efforts. 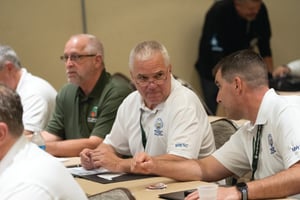 The final day of conference was May 24, and began with Organizing Director Todd Dunnahoe, who reinforced the need to continually organize. General Secretary-Treasurer Greg Revard then reported on the next steps Local Unions must take regarding audits and LM2s to ensure everyone is on-track with the needed monetary tracking.

Following Revard, the conversation then turned to changes to the Insulator’s Constitution involving withdrawal cards that was unanimously approved and implemented by the General Executive Board. The new language for Insulators Union Constitution Article XVI, Section 2 can be found by contacting your Local Union office or reading a copy of the Summer edition of The Insulators Journal.

After talk about the Constitution, Western States Conference International Vice President Doug Gamble and Local 16 Business Manager Mel Breshears spoke about the relationship between Local 16 and Petrochem. The two sides signed a Collective Bargaining Agreement in 1974, but over the last 25 years, the relationship had deteriorated, leaving the CBA in limbo. Gamble and Breshears spoke about the long-term organizing campaign conducted that Local 16, and
many other Locals in the Western States Conference, have been working on and the need for engagement in the political culture.

“Starting from the bottom and building to the top, everyone in this room needs to get involved in politics,” Breshears said. He then discussed California Senate Bill 54, which was influenced by a renewed interest in refinery safety.

Government Affairs Director Chip Gardiner followed Breshears and talked about a $100,000 grant that was secured from the U.S. Health and Human Services Department to begin the process of creating a Mesothelioma Patient Registry list. After Gardiner, Health Hazard Fund Administrator Tim Keane presented on the Political Action Committee (PAC) Fund and the need for more Locals to contribute.

Local 135 Instructor Daniel Haguewood, a Level 3 Certified Thermographer, then addressed energy audits including how Locals can train for certifications in thermography and how that can be an asset for garnering more work. Local 76 Brother Stephen Blea continued the thermography discussion and explained how it helped his Local pick up work.

“The end result will save the client millions of dollars in energy costs in just a few years, and we are the ones that get to perform the work,” Blea added. 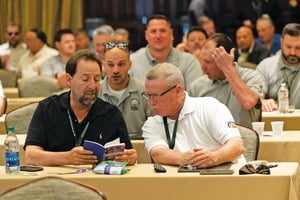 Concluding the third day of meetings, the Training Coordinators and Instructors again joined the Local Union Officers for the last few combined topics. General President McCourt, IIIATF Administrator Haun and Gardiner all gathered on stage to address the current presidential administration’s 2017 initiative to expand apprenticeship and the possible changes in oversight regulations of apprenticeships by the Department of Labor. There may be potential changes to how apprenticeships are viewed by the DOL, which may allow Independent Registered Apprenticeship Programs to gain ground in the construction industry.

Nothing has been officially released as of the publication of this issue, but as with many of the recent policy changes, the need to respond may come quick and all three leaders urged the attendees that action may be needed from all union members.

“Our elections have consequences, and this could infringe on our livelihood” said General President McCourt. To close out the conference, McCourt thanked everyone for their participation in this inaugural event.

With resounding support, the delegates unanimously agreed to again combine the 2021 conferences. The 2020 event will take place at the Hilton Lake Buena Vista in Orlando, Fla. in early June.