General President James McCourt gave the Convention’s opening day keynote speech, providing his State of the Union address to delegates. It began with a review of the Insulators Union’s history, highlighting key milestones from over the decades.

With the Union’s history as a backdrop, GP McCourt unveiled his priority for the next five years: Improved Organizing efforts by every Local Union. He reviewed existing bylaws that require every Local to have at least one Organizing campaign, and a committee to review and report on that campaign every month.

Various Locals were mentioned as either working hard on Organizing efforts, or those that have failed to participate.

With strong commitment in his voice, McCourt challenged the delegates and anyone not in agreement on the importance Organizing plays in the future of the Union, to nominate someone new to lead the union (no one was nominated to run against the General President).

“I took an oath of office” McCourt explained. “I’m here to make this union bigger, better and stronger – so that it will stand as an independent union!” 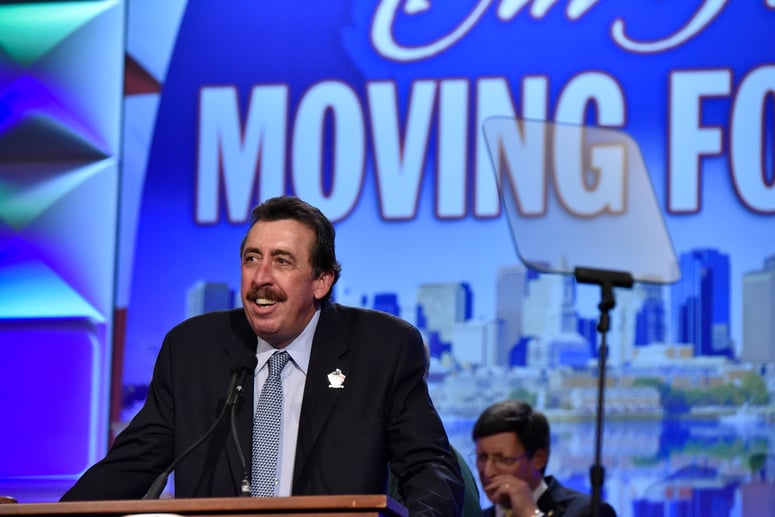 The General President then asked all the Regional Organizers to come to the stage to be recognized. The group was tasked to lead the renewed Organizing push in the years ahead.  After summarizing his top priority, McCourt also spoke to the delegates about the importance of the Disaster Relief Fund, and all that it has done for the Union.

“God bless the Insulators for taking care of their own.” McCourt exclaimed as he gave a recap of the Disaster Relief Fund and how it was established.   “We should all leave this Union in a better place than when we came in,” McCourt said, acknowledging a popular quote often cited by General President Emeritus Grogan, who he thanked again for his dedication and service to the Union.

Additional topics McCourt discussed with delegates included the Apprenticeship and Training Fund, the Labor Management Cooperative Trust (LMCT) and the Insulators Tissue Bank, along with the results of the most recent political elections in both the United States and Canada. The General President shifted his speech to current activities, including an overall summary of the status of the Insulator’s Union.

“Delegates, this report is about the state of our union. As your General President, I strongly believe that our Great International Union has the tools and programs in place to carry us into the future.”

Among the tools taking the HFIAW into the future is the expansion of various marketing efforts. This has included an improved quarterly newsletter, The Insulators Journal, a more vibrant website and a unified approach to various social media platforms. You can follow and engage with the Insulators on Facebook, Twitter, YouTube and Flickr with the name InsulatorsUnion.

Wrapping up his State of the Union speech, McCourt unveiled the various proposals that he, Secretary-Treasurer Greg Revard and the General Executive Board proposed to the delegates.

All three of the proposals went through committee discussion, were presented for a vote on the Convention floor and were passed by the Delegates of the 31st Quinquennial Convention.