During the last weekend of October, more than 3,000 tradeswomen and allies gathered at the Paris Casino in Las Vegas for North America’s Building Trades Unions (NABTU) Tradeswomen Build Nations (TWBN) Conference. TWBN is the largest gathering of any kind for union tradeswomen, and the largest NABTU event, eclipsing the annual Legislative Conference.

The event, which has consistently seen attendance growth year over year, is intended to support and empower female members of the building trades. Currently, women make up less than 10 percent of the total membership. The conference returned to an in-person format after two years of virtual events due to the COVID-19 pandemic.

Attendance in Las Vegas broke the previous record established at the 2019 event in in Minneapolis, the last time the conference was held in-person. The Insulators union was well represented in 2022, as more than 150 Sisters attended, along with just under 50 male members and union officers. As in years past, the Insulation Industry International Apprentice and Training Fund (IIIATF) provided a stipend for Sisters to attend. Local JATCs were reimbursed $1,500 per attendee, up to $3,000 for two Sisters to help offset the costs and encourage as many Sisters to attend as possible. 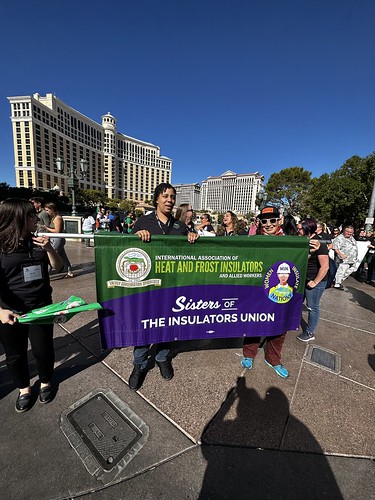 Participation by Insulators Union members has increased every year since International involvement began in 2017, and the IIIATF was pleased that 51 Local Unions, including at least one from each International Conference, had members attend the event.

The three-day conference focused on a theme of “Stronger Together,” and included a number of workshops and notable professional and industry speakers during the two plenary sessions.

One of the keynote speakers was NABTU President Sean McGarvey, who welcomed all attendees to the Conference and praised the work of the NABTU Tradeswomen Committee, which coordinates each year’s conference. He also discussed how the Committee assisted NABTU with a research initiative to investigate ways to eliminate childcare barriers across the building trades. From this data, NABTU created two Childcare Pilot Programs – one in New York City and the other in Milwaukee. NABTU anticipates that these programs will help minimize workforce pressures by providing tradesmen and tradeswomen with the peace of mind that their children are in a quality care setting while they work. This will also improve their financial situation by subsidizing the cost of childcare.

She discussed the benefits of being a part of a Union and how other non-traditional groups are organizing for better workers’ rights and becoming members of the federation.

“There is so much momentum for labor organizing building around the country,” she said. “Everywhere from Starbucks and Apple Stores to universities and stadiums. And we want to capture that momentum and use it to propel us into the future.”

Shuler then outlined the AFL-CIO’s goal to organize 1 million working people over the next 10 years. “I want to make it clear: This is a floor, not a ceiling,” said Shuler. “I know we can do it. Organizing is what we do. It’s who we are. And when we organize, we deliver results.”

HFIAW Local 6, Boston Sister Tia Ferrie had the honor to introduce U.S. Dept. of Labor Secretary Martin J. Walsh at the conference. Ferrie graduated from the Building Pathways Program, which Walsh helped create while he was the Boston Building Trades Council Secretary-Treasurer.

A card-carrying member of LiUNA, Walsh discussed the strides organized labor has made under the Biden Administration.

Insulators Union members attended the following workshops: Childcare: It’s no longer a personal issue; Be that one guy: How to address bullying, harassment and intimidation; Women in Union leadership; Lean in circles for union tradeswomen; Protecting workers’ mental and physical health; and Developing tradeswomen affinity groups within your home Local.

a panel that touched on the value of female organizers and how they can increase the recruitment and retention of women in the trades.

Labor Management Cooperative Trust Deputy Director and Local 1 Sister Gina M. Walsh was part of the Recruitment: Strategies for tradeswomen to advance workshop. She also served as the Insulators Union representative on the NABTU Women’s Committee. Every trade, including the HFIAW, held a private Union-specific caucus on Saturday afternoon.

During the Insulators’ Caucus, Local 23 Harrisburg Sister Tara Minnich spoke about her journey with breast cancer and her road to recovery. She talked about the importance of early detection and mammograms. She urged everyone in the room to tell the Sisters in their home Locals and all the other women in their lives to get mammograms and to be proactive with health concerns. With the Insulators Union’s history dealing with exposure to asbestos and cancer, the health concerns of our union members must be a priority.

For the first time since the 32nd Quinquennial Convention in Detroit, newly elected General President Terrence M. Larkin and most members of the General Executive Board addressed the members in attendance.

Additionally, the Insulators participated in the annual TWBN Banner Parade. Our Sisters proudly carried banners promoting our Union and their Locals. Many of the Brothers in attendance marched in solidarity alongside our Sisters during the parade.

“It was a great experience and something I am proud to be a part of,” Local 18 apprentice Ashlea Albertson said. “It was such an honor to march with other Insulator Sisters in Las Vegas.”

Local 119 apprentice Nicole Kalynuk said the conference provided an opportunity to learn how to become more involved in the Union.

“I had such a wonderful experience at the NABTU TWBN Conference,” she said. “I felt like I learned a lot and am ready to go back to my home Local and get more involved.”

On the morning of Oct. 30, Local 18 President Kim Patrick represented the Insulators Union in a roundtable breakfast discussion with U.S. Dept. of Commerce Secretary Gina M. Raimondo. Patrick and tradeswomen representing other trades, spoke about the issues they face on a daily basis.

Before the conference ended, it was announced that Washington, D.C. will be the host city for the 2023 TWBN Conference. The Insulators Union will continue to update its website at www.insulators.org/twbn with any information related to the 2023 conference.

Thank you to all the HFIAW Sisters who continue to break stereotypical barriers and represent our Union.