In the past, the award was given during the Master Apprentice Competition, and beginning in 2019 it was among many accolades announced during the Florence Bernard/Alta Miller Scholarship Dinner, held during the
combined Local Union Officers/MAC/JAC Conference.

With no in-person events held in 2020 due to COVID-19, the IIIATF collected nominations but did not present the 2020 award until this year.

“Over the two years we received many great nominations, but with the help and approval from the IIIATF Trustees, two well-deserving individuals were selected,” said International Insulation Industry Apprenticeship and Training Fund Administrator John Stahl.

During the virtual presentation, Cavey had the honor to announce that McGuckin won the 2021 W. F. Pablo Bleiker Award.

Brother McGuckin has worked and contributed to the industry since 1986. He earned his brown card in 1994, became a state and national certified fire instructor in 1998 and earned his U.S. Green Building Council LEED 101 Instructor status in 2010.

He teaches Labor History for the IIIATF Teaching Techniques, a program he has took as a student, and for the past 10 years, has been involved with since the National Labor College. For the past six years, he has held an ICRA Train-the-Trainer certification, and since 2014 has been a Level 1 Certified Thermographer. McGuckin spent nine years as a part time instructor and the last 11 years as the Local’s Training Coordinator.

When announced on the video conference, Brother McGuckin was surprised by his wife Terryl, his daughter Madi, his son and current first-year apprentice Matt and niece Amanda. Local 17 Local Union Officers joined in the virtual celebration and Business Manager Bill Mangin congratulated McGuckin and thanked him for his impact on the industry and on Local 17. 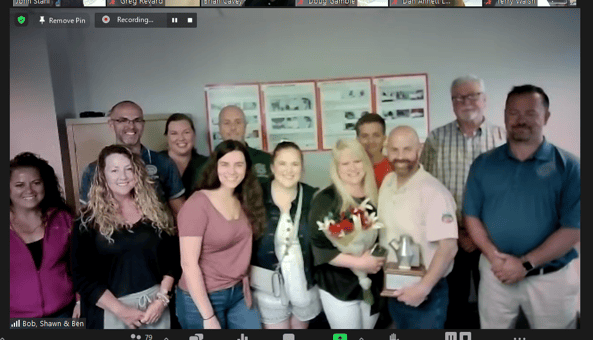 Following the announcement that McGuckin was the 2021 winner, Cavey than began to read the biography for the 2020 W. F. Pablo Bleiker Award winner.

Unbeknownst to him, Cavey was reading his own biography. It didn’t take long, however, for Cavey to realize he won the 2020 W. F. Pablo Bleiker Award.

He was then joined in his office by his family, including wife Amy, daughters Summer and Morgan, and father Bernard “Bernie” Cavey, Jr. 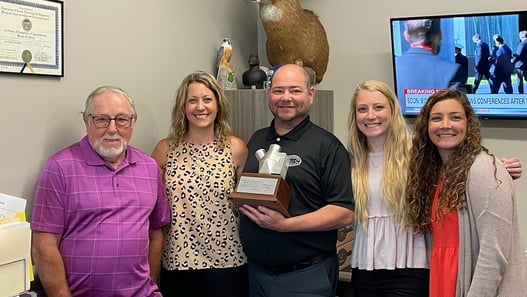 A third generation Insulator, Brian Cavey followed in his father’s footsteps, Bernie Jr. was initiated in 1968, and his grandfather, Bernard Sr., who joined the trade in 1941.

Brother Cavey entered the industry in 1990. He has a Bachelor of Arts from the National Labor College, and among his many certifications are OSHA Instructor, OSHA Master Instructor, Certified Insulation Energy Appraiser and Fire Stop and Smoke Seal Trainer.

He has served on Local 24’s Executive Board, Organizing Committee and was elected as Vice President and President. Brother Cavey has been on the IIIATF JAC Steering Committee for over 20 years, spent 19 years as the Training Coordinator with his Local Union JATC and for the last two and a half years, has served as the Local Union Business Manager.

“Both Pablo winners have been role models and mentors for many other Training Coordinators, including myself,” said IIIATF Administrator Stahl. “Brother Cavey and Brother McGuckin always have made themselves available to any Training Coordinator in need of help, advice or just to answer a question. I congratulate and thank them for all they have done, and all they will continue to do.”

Named after W.F. Pablo Bleiker, an outstanding individual and devoted training coordinator who made a dramatic impact on the Insulators Apprenticeship Program, the award dates back to 2002. Since then, it has been presented annually to recognize deserving and outstanding individuals who have contributed to the industry and exemplify the same qualities and dedication to industry training as Bleiker.

Congratulations to Brother Cavey and Brother McGuckin. We are immensely proud you both represent our industry.