2017: A Year of Missed Opportunities

Last year was filled with many unprecedented presidential actions that resulted in the creation and ongoing work of congressional and independent counsel investigations. This investigative work continues to distract the Trump Administration and Congress from the primary work of governance.

Instead of working with Congress on infrastructure, President Trump made the repeal of the Affordable Care Act (aka ObamaCare) his first legislative priority.

After the failure to repeal ObamaCare, President Trump failed to work with Congress to approve the federal 2018 budget or immigration legislation.

As a result, the federal government has operated on a series of short-term budget extensions (including a very brief government shutdown), and the immigration status of thousands of individuals who only know America as their home is uncertain.

For a leader who constantly promotes himself and his business expertise, President Trump does not seem to understand the need for government agencies, especially the Department of Defense, to have budget certainty to maintain its operations, or for the Dreamer kids to have immigration certainty to continue to be productive in America.

After nearly a year of legislative failure, President Trump and Congressional Republicans did produce one legislative victory, but their success with the enactment of tax legislation will be costly for Insulator members and their families.

President Trump and Congressional Republicans want Americans to enjoy the temporary tax benefits before the November 2018 mid-term elections, but there will be outrage when many Insulator members calculate their 2018 taxes before April 15, 2019 and discover that many popular tax deductions have been cut or eliminated.

One costly change is the full deduction for state, local and property taxes is now capped at $10,000. This is double taxation and will undermine the ability of state governments to make investments in education and infrastructure.

Another tax hit for Insulators is the elimination of the tax deduction for unreimbursed expenses such as tools and supplies, work uniforms, union dues and expenses for work-related travel.

If you find in 2019 that your 2018 taxes are lower because of the new tax law, that is great, but know this: 83 percent of the tax benefits go to the wealthiest 1 percent of households with net wealth above $10 million, and the large tax cuts for corporations are permanent.

There are many significant consequences of the irresponsible $1.5 trillion tax cuts that overwhelming benefit the super wealthy, including the Trump family.

First, the tax breaks are financed with borrowed money from China and other nations that Insulator members and their families will have to pay back with interest. This is a tax bill that our kids and grandkids will have to pay.

Second, with the increase in the national debt, Republicans will now advocate for cuts in important programs such as Social Security, Medicare and Medicaid.

President Trump and the vast majority of Congressional Republicans made a clear choice of their governing priorities in 2017: Tax cuts for the wealthiest individuals and corporations are more important than investing in infrastructure to create jobs for our members today and create more good-paying jobs for tomorrow.

Donald Trump won the support of many building trades members by making infrastructure a top campaign priority. Because of his real estate and construction experience, Donald Trump made his case that to make America great again required a major infrastructure program.

Many building trades leaders and members had great expectations that President Trump would make infrastructure a priority in 2017.

He did not. In early meetings with Trump Administration officials, we learned that President Trump was planning a big infrastructure proposal, but the draft plan would not include a significant federal investment.

After many delays, President Trump released his infrastructure plan in February 2018, and his $1.5 trillion plan relies primarily on local units of government and private investment to fund infrastructure.

The Trump plan would only provide $20 billion a year for 10 years (Interesting to note that the $1.5 trillion number is the same figure as the Republican tax cuts).

At a time of increased division in America, the unifying themes of justice and opportunity take on even greater meaning this year, as we reflect upon the 50th Anniversary of the deaths of Martin Luther King Jr. and Bobby Kennedy.

Martin Luther King, Jr. died in Memphis in April 1968 because he was standing in solidarity with union sanitation workers who were on strike fighting for better pay and safer working conditions. Dr. King worked for social and racial justice, but also for economic justice.

Likewise, for Bobby Kennedy. From his poverty tour of the Mississippi Delta and standing in solidarity with Ceasar Chavez and the United Farm Workers Union, Bobby Kennedy worked for social and economic justice for not only the marginalized, but also for union workers.

These two great Americans challenged America to provide justice and opportunity to all of its citizens in the 1960s, and they continue to inspire us today to fulfill, “The Dream” of Dr. King and the ideal of the U.S. Constitution to become a more perfect union.

General President McCourt's view is that Democrats cannot expect to win in November by the Resistance movement alone. Democrats must have a compelling message and program of what they plan to accomplish.

There will be more attention on the 2018 elections in the Summer and Fall Journals, but as states begin to have primary elections, it is imperative for every Insulator member in the United States and Canada and their family members to be engaged in every election that determines who represents you.

An essential part of political engagement is accountability, and we will continue to update the list the Members of Congress who support our Insulator bills on our International website.

If your elected House of Representatives member is not on the list; send them a letter to request support (legislative support letters can also be found on the International website).

I am looking forward to another great year of advocacy as we continue to build support for the Mechanical Insulation Incentive Bill (H.R. 3349) and the Mesothelioma Patient Registry Bill (H.R. 1563).

Lastly, we are also expanding our outreach to state and local units of government to promote work opportunities for Insulator members, and pleased that the Insulators are working more closely with the National Association of State Energy Officials (NASEO). We have already had a successful meeting with Maryland State Energy officials in December. 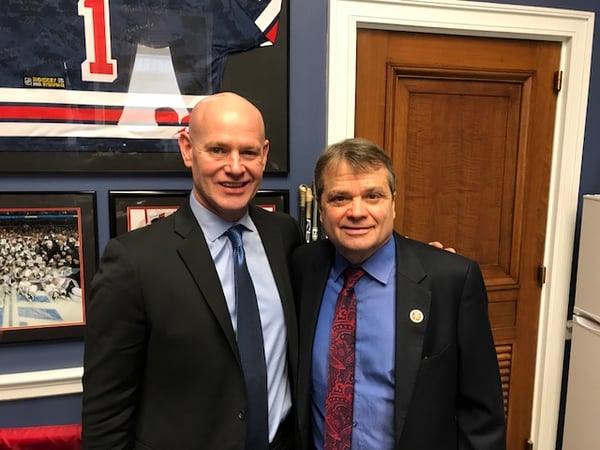