Including the promise that “America’s labor leaders will always find an open door with Donald Trump,” the new U.S. President was the final speaker to address the roughly 3,000 delegates attending the annual National Building Trades Legislative Conference in early April.

HFIAW General President James McCourt was on the stage with the other building trades general presidents to shake Trump’s hand prior to his remarks, which concluded two days of speeches, consisting mainly of an assortment of Democrat and Republican legislators.

“You can talk with a president who knows how much concrete and rebar you can lay in a single day,” Trump said, referring to his pre-presidential career as a developer, but he called himself, “a builder.”

He summarized the overall bleak news for the labor movement as the main reason the building trades must step up.

“What we are seeing today is very similar to what the leaders of the Building Trades faced in the 1920s … America’s manufacturing unions are a shadow of what they once were. And our public-sector unions are under assault from every quarter,” he said.

He went on to remind the delegates how construction unions were under attack from wealthy business interests. But they fought back, and membership started to rise in the mid-1920s and kept rising. Now, they must create the same momentum, but in different ways, McGarvey said. 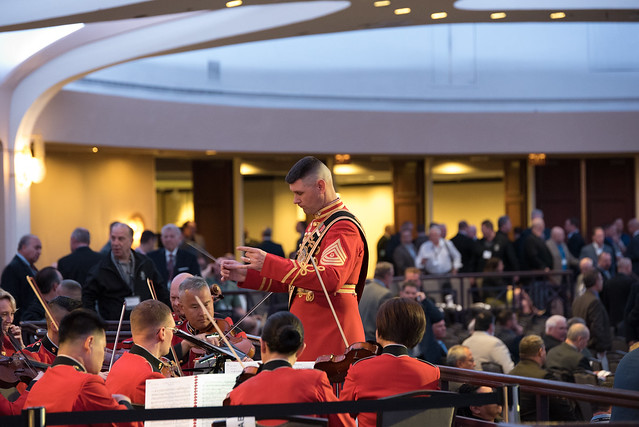 Following the two days of speeches, HFIAW delegates took to Capitol Hill to meet with legislators. All the trades were encouraged to remind lawmakers about the importance of preserving the Davis-Bacon Act’s prevailing wage rules and emphasizing the value of Project Labor Agreements.

Besides those topics, the Insulators lobbied for support of The Mesothelioma Patient Registry Bill and the Mechanical Insulation Tax Incentive Bill.

The night before the conference began, the DC Friends of Ireland held their annual benefit dinner where numerous HFIAW delegates were in attendance along with General President Emeritus James A. Grogan. Grogan was recognized for his continued support and dedication to this charity and received a standing ovation from the crowd.

After the speakers were finished, attendees participated in smaller afternoon sessions that covered topics ranging from safety and union liability to forecasting paths and priorities for the year ahead.

Also on Day 2, the Insulators International sponsored a lunch for attending HFIAW delegates to recap and discuss the action items that had been addressed. President McCourt’s message centered on the political priority items as well as the importance of being continually active.

“The Mechanical Insulation Incentive Bill and the Mesothelioma Patient Registry will be a priority for us in 2017” stated General President McCourt.

The lunch continued with Chip Gardiner, Director of Government Affairs, discussing the Insulators plan of action while on Capitol Hill and at home.

“We have every opportunity to talk about Mechanical Insulation and Energy Efficiency, we need to take that opportunity and make the most of it,” he said.

The action and progress made by members of the HFIAW with the various elected officials was intended to be a starting point leading to similar efforts at the state and local level. Bob Reap, Business Manager at HFIAW Local 30 Syracuse, met with New York Congressman John Katko (R-24), the sponsor of the Mesothelioma Patient Registry Bill, to present General President McCourt’s endorsement letter.

“We have to educate the public, the politicians and our communities on the issues that matter to us and mostly on Davis-Bacon and Prevailing Wage.” McCourt told the lunch crowd. “We have to knock on doors, because if we don’t, who will?”