A new resort planned for the Las Vegas Strip will create a nice jackpot of work for members of HFIAW Local 135.

The $4 billion Resorts World Las Vegas (RWLV) project is a 3,000-room Asian-themed hotel/casino, built on the site of the former Stardust Hotel and Casino. W.A. Richardson Builders, LLC was named Construction Manager for the first, ground-up, integrated resort development on the Strip in a decade.

The property is owned by The Genting Group, a Malaysian company with a 30-year track record of investing in the America, including New York City and Miami. Resorts World Las Vegas is their first property in Nevada. According to the project’s website, RWLV will include three hotels, multiple restaurants featuring a variety of authentic, regional Chinese cuisines, over 100,000 square feet of innovative gaming space, numerous retail offerings and a top-tier nightlife venue.

The Southern Nevada Building Trades Unions has been instrumental in working with The Genting Group to use union contractors to complete the project. It has been reported that Genting has committed to using union labor throughout construction.

In a prepared statement, Genting officials said over the course of the construction and during operation, RWLV will bring tens of thousands of jobs to Southern Nevada. They estimate construction will create more than 30,000 person-years of direct and indirect employment. A person year is defined as one person employed for one year. 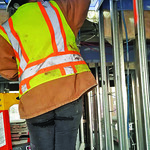 The resort and casino will be completed in phases. Phase one will include a hotel, multiple restaurants, over 100,000 square feet of gaming space, retail space, nightlife venues, underground infrastructure and the system’s central plant. The next phase will include more work on the casino and a second hotel tower.

Bids have already been placed for the second construction phase and contracts should be awarded in the coming months. Genting purchased the 87-acre-property for RWLV in 2013 and broke ground in 2015.

The project has experienced some minor setbacks, but appears to be back on track, as the buildings have started to rise. “We have been waiting on this project to start,” said Local 135 Business Manager Ricky Johnson. “Work is coming back to the Las Vegas area and this is just the beginning.”

“In 2008 when the economy was hit hard and construction on the Las Vegas strip came to a stop, the Local 135 leadership and members took all necessary steps to maintain the strength of the Local with sacrifice and dues increases,” said Western States Conference International Vice President Doug Gamble.

Gamble said Johnson has been a long-time industry leader in Las Vegas, also serving as president of the Southern Nevada Building Trades. Gamble praised Johnson’s efforts for his Local and for all the area’s building trades.