Sixty kilometers east of Turin, Italy, nestled on the shore of the Po River sits the Italian town of Casale Monferrato. For centuries this community has been the important centre of the Piedmont Region of Italy and today boasts a beautiful bounty of rich history and beautiful architecture. However, for over 80 years Casale Monferrato and all its’ citizens were buried in clouds of asbestos fibres from the manufacturing of fibre cement products by the Eternit factory. For those eight decades the community was destroyed by the cynicism of those who, for the sake of profits, did not hesitate to put in danger the health of the employees, their relatives and of all of those, who by simply living in the town, were forced to breath this dust of death. The last century has resulted in Casale Monferrato being known as the epicentre of mesothelioma and asbestos disease.

In the 1980s the people of Casale Monferrato had reached their breaking point. Watching their fellow workers, families and friends fall victim to the carelessness and greed of this company they began a relentless battle. Through incredible acts of bravery involving street protests, marches, public campaigns, strikes, lawsuits and Judicial Activism the people of this tightknit community were able to come together as a whole and put to rest the actions of Eternit. As the town took its own measure to ban Asbestos in the mid eighties, a few short years later Italy implemented the first national law banning asbestos in 1992. 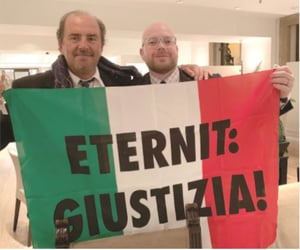 Asbestos was used all over Italy, but by far the worst hit was Casale Monferrato. Exposures in the workplace and throughout the city ultimately caused over 1000 cases of mesothelioma, an almost always fatal cancer linked only to asbestos. Even though it has been many years since the factory closed, there are still 50 new cases of mesothelioma annually in Casale Monferrato. There were also 1400 other asbestos disease cases in the city, mainly asbestosis and lung cancer. Imagine the impact of this level of disease and death on a small, tightknit city. Virtually no family went unscathed.

As you may be aware from the late 19th century through the 1970s, hundreds of thousands of Italians came to Canada seeking a better life for their families. Along with their suitcases these new Canadians brought along their craftsmanship and tool boxes as they made their way to new lands. As new immigrant workers, the Italians were especially vulnerable to being put in harm’s way and so often ended up in industries where asbestos was encountered daily.

Italian-Canadian Workers have played an enormous role in building Canada’s cities and generating wealth in our industries, especially in Ontario. And most of them did find a better life. Unfortunately, many of these workers paid the ultimate price and lost their lives at work. These appalling tragedies were foundational in the many battles and fights for the development of the health and safety regulations we have in the workplace today. History has a way of repeating itself, much in the same way that these sacrifices by Italian-Canadians helped us to create safer working conditions today, the experience from the people of Casale Monferrato can serve as a guiding light here in Canada as we begin to navigate what comes next after banning Asbestos.

The people of Casale Monferrato have endured tremendous suffering. But they have also learned a lot. They are eager to share their experience with Canadians, especially with the ItalianCanadians who suffered a similar fate. They have significant expertise to offer Canada’s asbestos affected community.

This April a delegation from Casale Monferrato visited Ontario and were hosted by the Amianto-Italia-Canada-Asbestos Committee, (affiliated with the Italian Fallen Workers Memorial Committee), Comitès (a major Italian community organization), Asbestos Free Canada, and other organizations vitally interested in asbestos issues. The CBTU along with the Canadian Mesothelioma Foundation, Villa Charities, Occupational Health Clinics for Ontario, Unifor, the Provincial Building and Construction Trades Council of Ontario, the Labourers’ International Union and the United Steelworkers’ Union (District 6) all sponsored the week-long visit by a special delegation who was comprised of the following representatives;
• Assunta Prato - A member of the city council of Casale Monferrato, retired Teacher and Mesothelioma Widow

Visits took place in Toronto as well as additional Ontario cities hit hard by occupational disease including Peterborough and Sarnia. Receptions for the delegation were held in each of the cities during the week culminating in Toronto, where the delegation visited the Memorial Wall at the Columbus Centre in Toronto, honouring Italian-Canadians who have lost their lives at work in Ontario.

The initiative focused on a positive learning exchange, which will serve to help us here in Canada make the necessary progress in mesothelioma health care, asbestos remediation and education and awareness. The delegation presented on a wide range of issues of great importance here in Ontario throughout the week, they included:
• Medical innovations – The health professionals of Casale Monferrato have had to respond to a crushing number of mesothelioma cases in a small community. They have developed an integrated approach involving frontline physicians, psychological support to patients and families and a hospice. They were eager to not only share this experience with colleagues in Canada but to learn about the important innovations in treatment being achieved in our Canadian centres of excellence in mesothelioma treatment.
• Educational programs on the hazards of asbestos – Educators in Casale Monferrato have created world recognized educational programs in their schools, using innovative resources and media to engage teachers and students in passing on the lessons that have been so hard learned.
• Eliminating asbestos from the urban environment - At the civic level, their succession of Mayors and City Councillors have dedicated the past 25 years to cleaning up all the asbestos in Casale, an admirable but difficult process, yet one that has met with significant success. We face the same challenge here in Canada, as our government has just recently approved a federal ban on asbestos, effective December 30, 2018.
• How one small community can mobilize to galvanize major progress on asbestos – The community in Casale Monferrato has spear-headed initiatives in Italy to ban asbestos and deal with its complex legacy in the built environment there.
• Making the transition from asbestos to a better future - Finally, the local community has worked together to develop a common vision for a clean, healthy city which welcomes the world to their beautiful region of Monferrato, now designated a part of one of the UNESCO World Heritage sites.

As in Italy, asbestos continues to haunt the hearts, lungs and minds of thousands of Canadian workers and their families, who sadly suffer from the decades of Asbestos use and production here in Canada. We have now reached the likely maximum level of asbestos disease in Ontario from those post-War exposures — around 150 Ontarians are dying annually from mesothelioma and another 425 from lung cancer. The visit of this delegation here in Ontario provides us with not only valuable knowledge but also inspiration from their perseverance and conviction to continuing their work well beyond the implementation of an Asbestos Ban.

The resilience of Casale Monferrato’s communities and families serves as a reminder to us all that we can never stop in our efforts in making this world free from Asbestos. Asbestos spread through their community and families over many generations, ravaging everyone along the way. Yet, they persevered, which teaches us that despite all the horrible, tragic, catastrophic things that can happen to us, the human spirit is resilient, alive and, forever fighting to make tomorrow a better day.

This delegation who traveled to Canada and served in representing the brave and dedicated 35,000 citizens of Casale Monferrato, offered their experiences, tragedies, successes and failures in hopes to help us find the keys to unlock the doors necessary to a Canada free from Asbestos. Asbestos has operated knowing no borders or boundaries in this world. We are very fortunate that these incredible champions have decided to operate in the same borderless and boundary free manner. We are forever grateful for their efforts to help us all be rid of this merciless material.

This article was written by Local 95 Director of Government and Community Relations Adam Melnick and originally appeared in the Canadian Building Trades Magazine Summer 2019 edition.