The three-day conference began on May 21 with a full day of reporting and speakers. General President McCourt opened the conference and welcomed everyone in attendance to the annual meeting.

McCourt’re-enforced the International’s commitment to organizing. He stressed the need to grow by attracting non-union insulators.

“It starts in this room,” said McCourt. “Organizing has to be a priority. We have to grow.”

He explained to the attendees that new organizing initiatives are being discussed between himself and the General Executive Board and then went on to outline ways the initiatives will be implemented to help the Union meet future growth goals.

The speech commanded attention from everyone in attendance as McCourt concluded his speech by saying, “This is our business, this is your business, and we have to make sure it stays here in the future.”

Following McCourt’s keynote speech, General Secretary Revard updated members on the financial health of the organization and discussed reporting changes approved by the General Executive Board.

Following McCourt’s keynote speech, General Secretary Revard updated members on the financial health of the organization and discussed reporting changes approved by the General Executive Board. 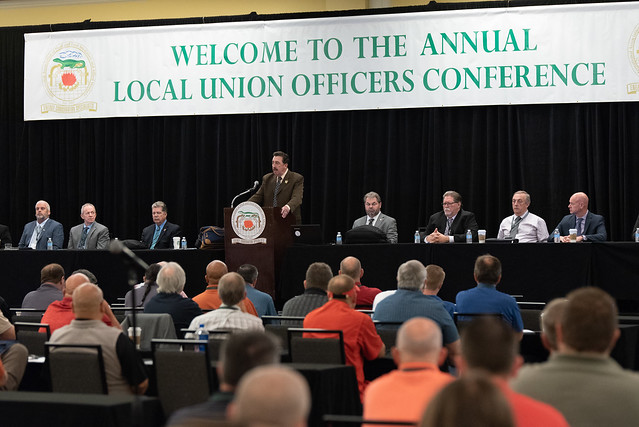 The first guest speaker was Chuck Gillian from the law firm of O’Donoghue and O’Donoghue. Gillian spoke to the attendees about multi-employer pension funds and changes occurring to those funds since he last addressed the Insulators Union at the 2016 Local Union Officers Meeting.

Terry Johnson, Esq. spoke about test results from mesothelioma/lung cancer early detection screening that HFIAW Local 17 established and conducts yearly for the last five years. With hundreds of scans, a baseline was established for asbestos-related diseases. Johnson was also a participant at the Insulators International Invitational Health Symposium, which was held earlier this year in Florida.

Dr. Michael Harbut, who played an integral part in the HFIAW Health Symposium and works closely with the Central States Conference Breath of Life Foundation, was the next conference speaker.

Harbut is a strong ally of the Insulators Union, who consults on asbestos-related disease care and has dedicated his medical career to asbestos- and mesothelioma-related research.

Harbut explained how various researchers and surgeons in the asbestos-related disease field have participated in medical events, including the IMEG Conference in Ottawa, where they discussed strides made in their research.

He applauded the Insulators in the room and the members on the front lines, who have made the HFIAW the leader in pushing for research, treatment and cures for asbestos-related diseases. He also took questions from the audience, including Midwest States Conference International Vice President Mark Selby, who asked about the types of CT scans and what information can be read from them.

Professor Andy Todd followed Harbut and advocated for greater participation by HFIAW members in the Insulators Tissue Bank. He also spoke about events at the Health Symposium, the recent IMIG conference and updates from his office on the Dr. Irving Selikoff cohort with mortality information.

The first speaker of the afternoon session was J.B. Pritzker, the Democrat nominee for the Governor of Illinois. He was led into the meeting room by Local representatives who have jurisdiction in Illinois, Midwest States Conference and International Vice President Mark Selby.

“We need to make sure that when businesses move to a state, their workforce has been trained by the best,” said Pritzker.

Alec and Meg Rexroat, Director and Assistant Director of the iSave program, were joined on-stage by International Vice President Emeritus Terry Lynch. The group took turns speaking about iSave, the labor-management initiative. They outlined the current goals of the iSave program, including working with the National Association of State Energy Officials (NASEO), and the various trade shows they attend. More information about the iSave program can be found at http://www.isaveteam.org/.

Director of Political Affairs Chip Gardiner followed the iSave/LMCT and explained how the NASEO program provides access to a variety of state officials. Gardiner also discussed current legislation in the U.S. House of Representatives: The Mechanical Insulation Incentive Bill and the Mesothelioma Patient Registry Bill.

Besides pushing the legislation, Gardiner said the HFIAW is working on a federal request to the Centers for Disease Control (CDC) to help create a mesothelioma registry, rather than wait for legislation.

They also held a drawing giving out a variety of sportsmen-related prizes, as well as a grand prize of a gun and an entry into another drawing for a Super Bowl package. Congratulations to Brothers Gary Allen, Stevon Lyles, Brett Large, Eugene Ricker, Greg Bowers, Matt Gonzales and Kristopher Schively for winning prizes from USA and Gary Payeur on winning a Smith and Wesson 9mm gun.

The second day of the conference broke from previous years traditions. The entire delegation broke into smaller groups and heard presentations from six committees.

General President McCourt and the General Executive Board thanked each of the following committee members for their time and efforts serving to make the committees successful for all of the delegates in attendance.

Labor relations and mediation expert Richard Barnes and a group of his associates who served as committee moderators went through the notes that were taken during the committee meetings and gave an official report on the final day of the conference.

Challenging everyone in attendance, Barnes asked the officers to critically think about the information they learned in committees and try applying what they discussed to how it can benefit their Local Unions.

As part of his conclusion to the conference, General President McCourt applauded Brother Neil Pittman, who just won a primary election for a seat as a County Commissioner, and Brother Bill McGee, who is currently serving as a County Councilmen, on their activism and engagement as elected officials in their area.

“You’re both great examples for our Union,” said McCourt. Then, to honor those Brothers who have dedicated their careers to serving our union, McCourt and the delegates congratulated a group of members who will be retiring within the next year, telling them they left this business better than when they came in it.

McCourt concluded the conference by thanking everyone for their participation, committing to a priority on the committees and their future involvement in the agenda for Locals/Conference/International, continuing to place a demand for priority on organizing and also said he will see all of the delegates next year in Phoenix.