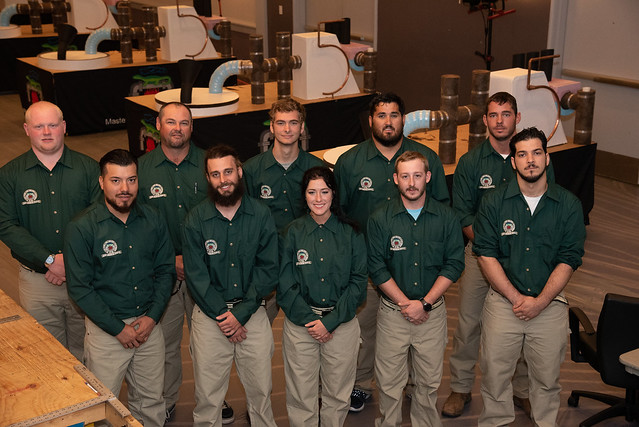 The three-day conference was hosted by HFIAW Local 5 Los Angeles and offered training coordinators from across the country the opportunity to share ideas and discuss the latest training techniques.

Held in Long Beach, CA (Local 5’s jurisdiction) at the end of June, Diego Palacios from Local 94, Oklahoma City, OK prevailed in a competition between 10 of the top apprentices from the various conferences across the U.S. and Canada.

The five-day competition began on a Sunday with a written industry-focused test. That was followed by the completion of a unique and challenging mock-up. The work included a set of work specs and 8 hours of roughin and another 24 hours of finishing work. The hands-on portion of the competition tests apprentices on a variety of skills they might encounter on the job. As in the past, competitors were blindly judged after rough-in and after finishing work by a panel consisting of volunteer judges from every conference. The competition room was sealed off from Local Union Training Coordinators who were at the hotel attending the Joint Apprentice Conference, which was occurring at the same time.

All MAC competitors received printed project specs that specified the work that had to be completed. Keeping with tradition, the mock-up consisted of elements related to the geographic location of the competition. The location tie-in, along with the challenging mock-up and specifications, were created by competition proctors Lew Fitzgerald and John Sullivan from HFIAW Local 14 Philadelphia, PA.

This year, the proctors designed the mock-up to include a record turntable to symbolize Capital Records, an insulated H to mirror the iconic Hollywood sign in Los Angeles and a boat resembling the Queen Mary, which is docked in Queensway Bay in Long Beach, CA. The specifications called for metal in white and silver; PVC in blue, red, grey and black; and rubber. All materials came with their difficulties as competitors worked on sweeps, round shapes and specs that specified material lengths and aesthetic requirements. The competition displayed a high-level of execution and professionalism that the MAC has come to expect, with slight variations that each competitor used to put their own spin and details on the project.

“These apprentices are our future and the work being displayed here is an incredible example of their talent,” said HFIAW General President James McCourt, who met all the competitors and walked through he competition room as they were working on the rough-in part of the mock-up.

The IIIATF congratulates all the apprentices and their coordinators for the hard work and dedication that made the 2018 Master Apprentice Competition a huge success.

W. F. Pablo Blieker was an outstanding individual and devoted training coordinator who had a dramatic impact on the Insulators’ Apprenticeship Program.

Blieker was always willing to help apprentices or fellow trainers in an effort to improve the quality of the HFIAW apprenticeship programs. He represented the model of excellence that is still considered an industry standard among the JAC members. Sadly, Blieker passed away in 2004.

The W. F. Pablo Blieker Award, named in his honor, is engraved with one of his quotes, “Order is the way of success; nothing is given to us; success demands work, perseverance and honesty.” The “Pablo” award annually recognizes deserving individuals who exemplify the same qualities and dedication to our industry and training.

This year, the International Insulation Industry Apprenticeship and Training Fund (IIIATF) presented the 2018 Pablo Blieker Award to Ron Eades from Local 37, Evansville, IN and remotely to John Unangst from Local 23, Harrisburg, PA.

The International and the IIIATF congratulates Ron Eades and John Unangst for their outstanding service and dedication to our union and the insulation industry. You will be forever recognized as the recipients of the 2018 W.F. Pablo Bleiker Award.