This year’s four-day legislative conference for Canada’s Building Trades Unions focused on union membership along with work-related issues, promoting a theme of “Diversity, Inclusion and Respect.”

Throughout the conference, held in Gatineau, Quebec May 7-10, speakers and panelists highlighted the importance of having a diverse and inclusive union, where members show respect for one another on the jobsite and in daily life.

In addition to the theme-related discussions, the conference also provided an opportunity for Canadian HFIAW leaders to meet with members of Parliament to discuss issues important to their Local, the Canadian Conference and the International Union.

Prior to meeting with elected officials, HFIAW members met with the Canadian lobbying firm, Summa Strategies, who prepared them for the meetings. Canadian Legislative Conference promotes diversity, inclusion and respect.

It is important for the HFIAW to build and strengthen their relationships with elected officials as the International continues to prioritize initiatives, such as mechanical insulation work completed by certified and Red Seal trained workers on publicly-funded projects and Temporary Foreign Workers.

Prime Minister Justin Trudeau officially launched the start of the Legislative Conference when he spoke to attendees about the importance of apprenticeships. “We have invested in apprenticeships because we know the biggest asset to Canada are Canadians in our workforce,” said Trudeau.

“We want to help aspiring apprentices. …We depend on you and your members. Our country was built by trades people and the future will continue to be.”

The first speaker to discuss the conference theme was Bridget Booker, a tradeswoman from the Iron Workers union. She talked about the tribulations facing women in the building trades. Booker, who suffered a miscarriage prior to the Iron Workers Union implementing paid maternity leave for female members, is an activist for women in the building trades. She was a featured speaker at the 2017 Women Build Nations Conference.

The first day of conference concluded with the North American debut of the film “Breathless,” which tells the story of individuals suffering from asbestos-related diseases. A preview clip of the film can be found on
the Insulators Union social media, as well as in a blog article on the Canadian Legislative Conference on the Insulator’s website.

Robert Blakely, CBTU Operating Officer and an honorary member of HFIAW Local 110 in Edmonton, Alberta, served as the master of ceremonies for the entire conference. On the second day of the conference, he introduced all International Unions’ General Presidents, including HFIAW General President James P. McCourt, who was in attendance.

Throughout the conference, Blakely provided updates from the CBTU office. During one update, he recognized Local 118 Business Manager Lee Loftus for his assistance and effort on the Building Trades report on the environment and carbon footprints.

He also addressed the audience on current House of Commons legislation to legalize marijuana and what this means to organizations that promote a drug-free workforce and Collective Bargaining Agreements that call for random drug tests. 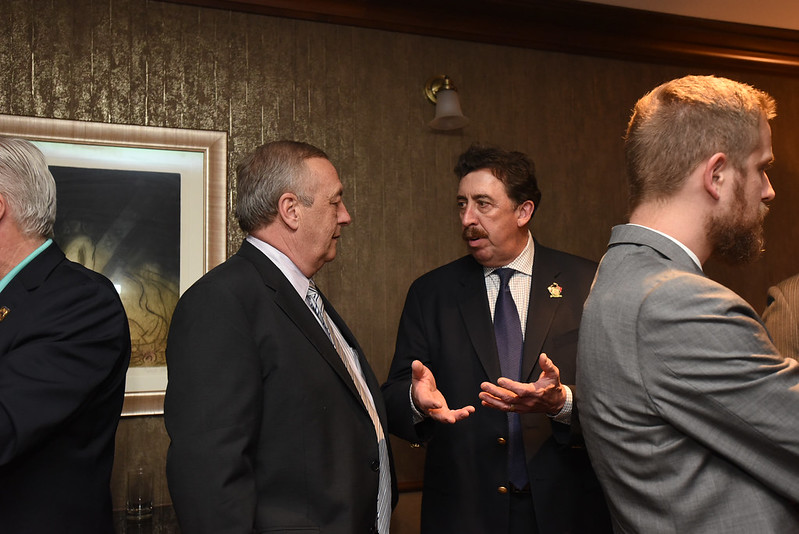 Day 2 also included the Leader of the New Democratic Party of Canada, Jagmeet Singh, who discussed how trade and work agreements should benefit workers, the importance of mechanical insulation and the positive impact it makes on the environment.

"A good job and good environment doesn’t have to be exclusive, we can and should have both,” Singh said.

MP Scott Brison, a member of the Treasury Board of Canada, spoke on fundamental labor rights of wages, the ability to organize and safe working conditions. He highlighted a five-year grant program to support women who are in Red Seal training and a Women in Construction Fund to help women in the trades be more successful.

Canada is considering an international ban on asbestos, including the export and continued use of this deadly material, which is still used around the world.

Both Engel and Loftus spoke with Jonckheere after his presentation and offered support on any effort to internationally ban asbestos.

Events continued with Robert Kucheran, Chairman of the Board of CBTU, who discussed the importance of inclusion in the building trades.

He was followed by Bill Ferreira, Executive Director for Build ForceCanada, and Sharon Barney, the founder of Sharn Barney Consultancy, who both touched on diversity, inclusion and respect in different ways.

Ferreira reviewed the growing need for more union construction workers, citing the large number of current members who will retire in the next five to 10 years. He estimated there will be a need to replace about 250,000 current building trades members.

Barney addressed the need for inclusion of women in the current workforce. She touched on initiatives aimed at closing the gender gap through the BuildForce Project.

Attendees saw a gender-based violence, bullying and harassment presentation given by Angus Reid and JR LaRose, two former Canadian Football League players. The pair spoke on empowering every person to be the change on a jobsite and a voice of support for gender equality.

The second day of the conference ended with a CBTU Parliamentarian Reception held at the House of Commons in Ottawa. Over 100 politicians and their staff members were on hand to talk with Legislative Conference attendees, including HFIAW members, about political issues in each province.

By meeting with political leaders throughout Canada and in Ottawa, the HFIAW hopes to create a better working relationship with the country’s leaders and help move Canada in a positive direction that not only benefits the country, but also the Insulators Union.

During a panel discussion on Day 3, MP Patty Hajdu, the Minister of Employment, Workforce Development and Labour, said it was time Parliament commit to workers’ rights. Hajdu is working on the C65 bill to fight harassment in the workforce based on any factor. She also spoke to several Building Trades initiatives for equalizing women in the workplace.

Lindsay Amundsen, leader of BuildTogether: Women of the Building Trades, discussed initiatives, growth and the Sisterhood the trades in Canada are fostering to improve sex and gender inequality.

Related to inclusion, Peter Reed from the Central Ontario Building Trades Council/Hammer Heads, spoke about how workers with various disabilities can provide valuable assets to the building trades.

Alanna Marklund, from the United Association, also spoke about diversity and inclusion calling them a major key in changing the building trades’ industry culture. The conference also discussed inclusion for Canada’s indigenous population. In addition to the speakers mentioned, other speakers and panelists addressed the attendees on a variety of other topics.

A few of the more notable speakers included Brent Booker and Gregory Matte. Booker, Secretary-Treasurer of North America’s Building Trades Unions, said one of the NABTU’s goals includes providing Temporary Foreign Workers, who are members of the building trades, a more fluid movement between Canada and the United States. He wants to create a system where members can legally and quickly go to work in the other country.

Matte, the Canadian Helmets to Hardhats representative, provided delegates with an update on the program. The H2H program has made strides working with Canadian military veterans to pursue career opportunities in the building trades.