New Olympics plan would give rise to 2 neighborhoods

New Olympics plan would give rise to 2 neighborhoods

Posted by on Tue, Jun 30, 2015 @ 10:06 AM
Olympic planners on Monday unveiled a blueprint for two new Boston neighborhoods, billions in private development and an extension of the beloved Emerald Necklace, in an Olympic bid now recast as a city development proposal too good to pass up.

With the fate of Boston’s Olympic bid in the balance,Boston 2024 sketched out plans to use generous city tax breaks to prompt development of 8,000 units of housing among 12 million square feet of new, permanent development at Widett Circle and Columbia Point, new hotels, neighborhood amenities, and a city park where a temporary Olympic stadium would stand briefly in 2024, should Boston become host of the Summer Games.

“This could be the biggest economic development opportunity of our lifetimes,” said bid chairman Steve Pagliuca, introducing the much anticipated plan at a news conference Monday at the Boston Convention & Exhibition Center.

Mayor Martin J. Walsh called the revised bid, dubbed version 2.0, “a good solid plan,” but held off a full endorsement until he could have further discussions about possible risks to taxpayers.

“I like where we’re going with the plan,” said Walsh, who was at a conference in Colorado Monday when the plan was announced. “I’m confident in where we are going ... But I just want to make [sure] that the taxpayers of Boston ultimately and the people of Boston are comfortable.” 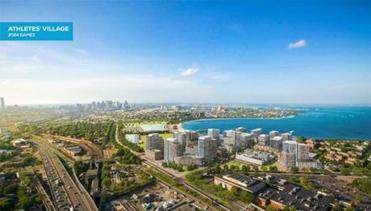 A new plan for the 2024 Summer Games calls for building two new neighborhoods at Widett Circle and Columbia Point.

Walsh said he is open to tax incentives for the developments.

“If the payoff warrants the size of the tax break, it’s worth it,” he said.

Governor Charlie Baker called the plan “a worthy attempt to answer many of the questions people have had about this project,” though said he needs “a lot more detail” about the public infrastructure elements Boston 2024 has called for.

Opponents have relentlessly criticized the bid as a risky venture for taxpayers, and continued that drumbeat on Monday.

“It is clear to us there is still substantial risk to the public,” said Chris Dempsey, a co-chair of the opposition group No Boston Olympics, after attending the Boston 2024 presentation.

Essential to the plan is $4 billion in private sector investment, undertaken in conjunction with $775 million in taxpayer financed transportation projects, which the committee maintains are needed with or without the Olympics. These include improving the MBTA and replacing the inefficient Kosciuszko traffic circle in Dorchester.

With the bid’s fate on the line, the new plan is also a shift in messaging for Boston 2024, repositioning the Olympics less as the ultimate goal of the planning effort and more of a waypoint along a sweeping 18-year economic development project.

The new plan’s more than 200 pages of data and glitzy renderings are also an attempt by Boston 2024 to counter attacks about the risks of the Games with a more tangible sense of the possible benefits.

The committee has raced to unveil the plan before the end of this month, under pressure from Baker and others. “The Olympics is a marathon, not a sprint,” Pagliuca said, in a Globe interview, “but we’ve sprinted a long way in a short period of time.”

Boston 2024 on Monday also released a new operating budget for the Games, which projects a $210 million surplus on about $4.8 billion in private revenue, generated through international and domestic sponsorships, broadcasting fees, ticket sales, licensing and other profit streams.

“I am very confident this is a conservative number,” Pagliuca said of the revenue projections.

The projected surplus could be used to offset unexpected costs in case of overruns, he said.

New public expenses under the plan include $455 million for technology improvements for the MBTA Red and Green lines, which the committee insists will be necessary to handle rush hour T traffic by 2024 even if Boston does not host the Games, as well as $100 million for a new Broadway T station entrance. The plan calls for the completion of two unfunded projects from the city’s existing Columbia Point master plan, the $160 million reconstruction of Kosciuszko Circle and a $60 million rehab of the JFK transit station.

With polls suggesting public support for hosting the Games is below 50 percent, the committee’s future rests on how well its 2.0 plan stands up to public and expert scrutiny.

The US Olympic Committee faces a September deadline to formally name a city for the international contest for the 2024 Games. The Boston bid is unlikely to go forward if the new plan falls flat. State leaders have hired an outside consultant, The Brattle Group, to analyze the risks of the new plan; the consultant is already on the job.

The theme of reducing risk is marbled throughout the new plan, yet questions remain.

The bid committee has budgeted $128 million under the new plan to buy insurance it says would protect taxpayers from risk, roughly double what Chicago organizers earmarked for insurance in their ultimately unsuccessful bid for the 2016 Games, the committee said.

But details on the insurance coverage are still being developed. The next step, the committee said, will be to retain a broker to seek proposals from insurance companies and begin negotiations on coverage.

The 2.0 plan builds in a 5 percent contingency into the construction costs of each venue, Pagliuca said, and Boston 2024 plans to require developers to insure their performance, including guarding against cost overruns.

Pagliuca said a Boston Games would the most insured in history.

Dempsey, from No Boston Olympics, said the bid committee’s insurance plans lacked detail and that no insurer has been identified to write the policies.

The bid committee has over the past several weeks announced a number of Olympic venues under the new plan, such as sailing in Buzzards Bay, tennis in Dorchester and gymnastics at the TD Garden.

But the heart of the 2.0 version is its proposals for the two most challenging Olympic facilities, the stadium and the athlete’s village, which were released Monday.

Under the plan, the 83-acre Widett site, called “Midtown” in the plan, would be redeveloped into a “mixed-use, transit-oriented neighborhood of 18 blocks” of new construction, according to Boston 2024 documents.

Under the proposal, the city would select a master developer for the site through a competitive process. The private developer would provide about $1.2 billion to get the site ready to build. That money would pay to buy the land and relocate existing businesses, construct seven acres of decking over existing railroad tracks, and another 46 acres of decking — essentially large platforms that support buildings — that would raise the grade of the site by about 24 feet, protecting the neighborhood from storm surge related to climate change.

The plan is modeled after Hudson Yards, a massive private development under construction on a 26-acre platform over rail lines in New York City.

In return for the investment in infrastructure, the Widett developer would have the right to build out about 8 million square feet of new construction at the site, under a tax break plan that would be negotiated between the city and the developer. Boston 2024 projected a potential agreement that would reduce property taxes by 85 percent the first decade, and step up the tax load over the next 30 years.

By 2030, the bid committee estimates, annual city tax revenue from the two sites will have increased from $1 million to $10 million, with further increases project in the future: $32 million by 2040 and $70 million by 2050.

The first phase of the permanent development would be built before the Olympics, on the northern part of the Widett site.

Boston 2024 would pay for a temporary stadium on the southern end of the property, which would be removed and recycled after the Olympics. Original plans called for a 60,000-seat stadium. Bid officials have increased the proposed capacity to 69,000 to capture more ticket revenue, they said.

The stadium’s footprint would be converted into a permanent park after the games, with buildings developed around it.

The athlete’s village, planned for Columbia Point, would follow a similar private development strategy to build 4 million square feet of new construction. It would be converted to 2,700 new student beds for UMass Boston and 3,000 units of housing, as well as shops, restaurants and community spaces, across a new 30-acre waterfront neighborhood, according to Boston 2024.

Plans for several sports venues, such as an aquatics center and velodrome, remain in flux, though the estimated venue costs are accounted for in the new operating budget, according to Boston 2024. 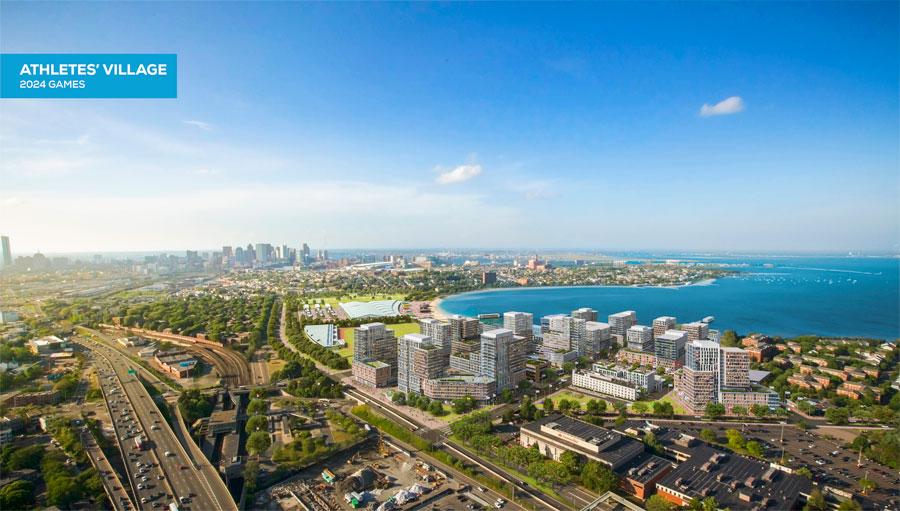 This image shows the concept for the athlete’s village during the 2024 Games. 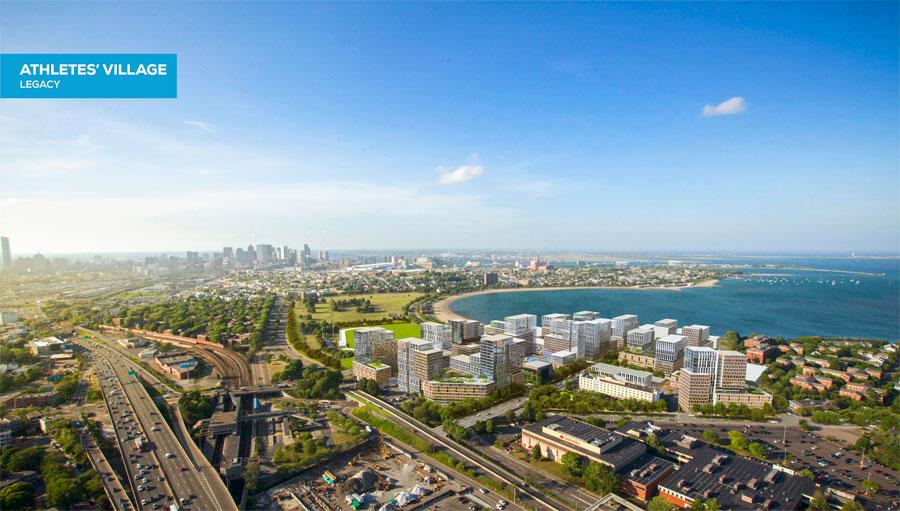 This image shows how Columbia Point might look after the Games.